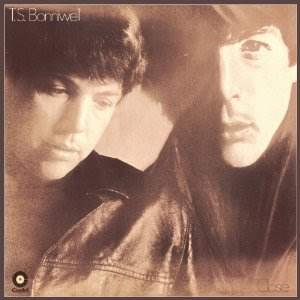 Like most people, I was aware of T.S. Bonniwell (often known as Sean Bonniwell) primarily for the Music Machine song "Talk Talk," which I had on at least two 1960s rock compilations when I was a kid. I had no idea that he'd released a solo album. And had I known, I would never have guessed that its sound was more in the folk vein. After all, "Talk Talk" is kind of a kick-ass rock tune, that is almost shouted or snarled rather than sung. So it came as a total surprise when I popped in Close and heard thoughtful, personal acoustic songs.

Bonniwell's full name is Thomas Sean Bonniwell, which is why this album is released under T.S. rather than Sean Bonniwell. Shortly after he was interviewed for the liner notes of this release, he died (this was in December of 2011), so he didn't get to see the CD release of his only solo album. All the songs on Close were written by T.S. Bonniwell.

Close opens with "Where Am I To Go," a soft folk tune (that reminds me a bit of Tim Buckley). It's sung simply. This is not an angry, abrasive, insistent folksinger, but rather a humble voice asking questions like, "What's my part in destiny?" and "What's too high and what's too low?" and "Tell me, where am I to go?" The song builds with drums and an orchestral sound.

"Love Is Such A Simple Word"

I love the instrumental intro to "Love Is Such A Simple Word." It's really pretty and it immediately got under my skin. However, I'm not as fond of the song's lyrics, which are about the different uses of the oft-heard word "love." For example, he sings, "A mother loves her baby's smile/A boy his favorite dog/A seaman loves the ocean spray/And the mornings crisp with fog." And of course it ends with the line, "I think that I love you."

"Who Remembers" is nostalgic list of childhood toys and games and other things that call to mind an innocence. But attached to these things is the question "Who remembers." Have we moved so far past these things that their imprint is gone from memory? Clearly not, at least not from Sean Bonniwell's memory. He sings, "Who remembers licorice sticks or kick-the-can or tug o' war?"

There is a different sort of nostalgia in "Something To Be." In this one, he sings, "Some little boy that I used to be/Is quietly calling my name to me." And then later he sings, "Some other man that I'm gonna be/Is quietly calling my name to me." There is the sound of a clock ticking our time away, which becomes more prominent toward the end of the song. The clock seems to be announcing our futures advancing on us, before we've had the time to make something of them. Vic Briggs does the lead guitar part on this song.

"Black Snow" is a song that Music Machine actually recorded. I love the piano on this one (it reminds me just a bit of Dave Brubeck), and there is some really nice stuff on drums. "Black Snow" is a truly interesting song, and is my personal favorite, though the short spoken word section toward the end is a bit jarring. "It's all the same to him, it's all black snow."

"Where It Belongs" is a fun country rock tune, with shades of Country Joe or perhaps Michael Nesmith. It begins, "It suddenly occurs to me to let my mind relax and take a tumble at a crossword puzzle song/Don't look for hidden messages or guess at what the message is/Because it's right up front where it belongs." And then he takes a slightly different stance with "And I believe in God, you see, but take it kind of personally/Keep it to myself where it belongs" (of course, if it's in a song, it's not really kept to himself).

He definitely shows a sense of humor in this one ("Put a stop to killing and so on/But I'm afraid that's nature's way/To make the total number stay/Around a figure, say, where it belongs"). This song even has a whistling section at the end.

Musicians appearing on this release include T.S. Bonniwell on vocals and guitar, Jim Gordon on drums, Jack Libeu on vibes, Lyle Ritz on bass, Sharon Hicks on bass, Bill Hinshaw on French horn, Virgil Evans on trumpet, Steve Lester on guitar, and Fleetfoot on 12-string guitar. The songs were arranged and conducted by Vic Briggs.

This special re-issue of Close was released on February 21, 2012 through Real Gone Music.
Posted by Michael Doherty at 4:30 PM