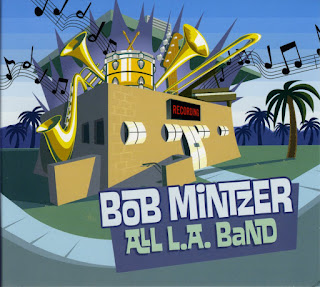 Bob Mintzer is an accomplished jazz saxophonist and composer. He is a member of the Yellowjackets and also leads his own big band as well as a quartet. On his new album, All L.A. Band, Bob Mintzer revisits some of his earlier big band compositions, music that covers several decades, all of it original material. He is based in Los Angeles, and - as the CD's title indicates - for this release he is joined by a group of other talented Los Angeles musicians, including Russell Ferrante, a Yellowjackets band mate, on keys, and longtime friend and collaborator Peter Erskine on drums. Erskine also produced this CD.

"El Caborojeño," a tune that was included on one of Bob Mintzer's live albums, opens with a great Cuban groove. I really dig the percussion right from the start. And then the horns lift this tune up and take it to some wonderful places. I particularly dig that trumpet. I love the joy to this track. This is the perfect opening track, setting the mood and getting the listener excited for more, and it's one of my favorites. It's followed by "Havin' Some Fun," a tune whose title is perfect, as this song has a light, playful, innocent vibe. "Havin' Some Fun" was included on the Monday Orchestra Meets Bob Mintzer album. "Home Basie" has more than a bit of funk to the groove, which is fun under those great horns. Mintzer seems to be having a really good time here.

"New Rochelle" is a tune that was recorded by the Yellowjackets, and also included on the Bob Mintzer Big Band release Latin From Manhattan, as well as on Monday Orchestra Meets Bob Mintzer. It has kind of an easy-going vibe, though it does build up at times, and to my ear feels like a great tune for a relaxed, warm summer day. Pour yourself a drink and sit out by the pool and enjoy the sunshine. Or, if you're like me and have no pool, just close your eyes and imagine that kind of scene. In that case, throw in a couple of women. Why not?

"Runferyerlife" is another composition that was recorded by both the Yellowjackets and the Bob Mintzer Big Band. This is one of my favorite tracks, and not just because of the drum solo (though certainly that is part of the reason for my enjoyment). This is a lively, bright number that moves at a good pace, and has a great feel to it. This is a particularly good rendition, with the band cooking.

The last three tracks on this CD are all compositions featured on the 1985 Bob Mintzer Big Band album Incredible Journey. "Latin Dance" has, as you might expect from the title, a good groove. And there is a good percussion section toward the end that I really like. "Slo Funk" is another favorite of mine. It's a very cool, loose tune with, yes, a bit of funk under that swing. "Tribute" is also a really cool tune, beginning with just keys, bass and drums. I love that nice, light touch on piano, with a groovy bass line below it. I could listen to that all day. And then the horns come in, and the tune becomes even stronger, which probably comes as no surprise, especially as it's a tribute to Thad Jones. There is also a playful quality to this track that I appreciate.