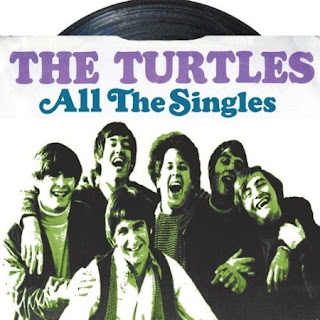 I got into The Turtles in the 1980s when I was in my teens. At that time, it seemed everything from the 1960s was incredibly popular again, and tons of compilations were issued. As I recall, I had a greatest hits compilation cassette that was actually of two bands – The Turtles on one side and, if memory serves, The Association on the other. On The Turtles side, it had “Elenore,” “You Showed Me,” “She’d Rather Be With Me” and, of course, “Happy Together.” I played that tape a lot, though there is a line in “Happy Together” that has always bothered me (more on that a bit later). There is a line in “Elenore” that always makes me laugh (but more on that also later). The new two-disc set, All The Singles, contains exactly what it promises – all of the singles, both the A and the flip sides, that the band released between 1965 and 1970, as well as a couple that were not released. Everything you know and love is included here, and also some real gems you might not have heard. This excellent compilation also includes extensive liner notes by Andrew Sandoval, with thoughts on the songs by band members Mark Volman, Howard Kaylan, Al Nichol and Jim Pons.

The singles are presented in chronological order, and so the first disc begins with the band’s first single, a really good cover of “It Ain’t Me Babe.” This track was included on that compilation I owned in the 1980s, and I think I heard The Turtles’ rendition dozens of times before I ever heard Bob Dylan’s original, and honestly whenever this song gets in my head even now, it’s The Turtles’ version I’m thinking of. I always loved that kind of snarl in their vocals as they sang the title line. Wonderful. It still totally works. The flip side is an original composition, “Almost There,” written by Howard Kaylan. This is a good rock tune that I don’t think I’d ever heard before, about getting closer to his girlfriend.

The band’s second single was “Let Me Be,” a song written by P.F. Sloan, who is probably most known for writing Barry McGuire’s big hit “Eve Of Destruction,” a song which The Turtles also recorded (it’s included on the second disc). P.F. Sloan also co-wrote the band’s third single, “You Baby,” which was the title track from the band’s second album (or, actually, one of the two title tracks, as the title of the album is You Baby/Let Me Be). This song was also included on that cassette compilation I had, where it was titled “You, Baby (Nobody But You).” It’s a fun pop tune that was always one of my favorites.

One of the most interesting songs (and one I hadn’t heard before) is “Grim Reaper Of Love,” written by Chuck Portz and Al Nichol. From its strange vocal opening (making me think of some odd church) to its unusual time, this one is quite different from most of this band’s material. The band’s next single, “So Goes Love,” is one of those that was not originally released. “So Goes Love” was written by Gerry Goffin and Carole King, and was also recorded by The Monkees, with Davy Jones on lead vocals (it was included on their Missing Links album). This version by The Turtles has quite a different feel from The Monkees’ rendition. Its flip side, an Al Nichol song titled “On A Summer’s Day,” was likewise previously unissued. (A different mix was included on the band’s 1970 album Wooden Head.)

“We’ll Meet Again” is a song I always associate with Dr. Strangelove (it was also used well in Stephen Frears’ The Hit, which I finally just saw, where it’s sung as a threat to Terence Stamp’s character). The Turtles’ rendition is very different from Vera Lynn’s, and is even different from The Byrds’ version. This version has a happy, bright, playful vibe, and is delivered at a fairly fast pace. It’s actually quite wonderful, and the more I listen to it, the more I love it. I also really like their version of Warren Zevon’s “Outside Chance.” (Bangles fans, this song was included on the recent compilation of early Bangles recordings, Ladies And Gentlemen…The Bangles!) They also do Warren Zevon’s “Like The Seasons.”

“Happy Together” was the band’s biggest hit, reaching #1 on the Billboard Hot 100. It was written by Garry Bonner and Alan Gordon. I do like this song, of course, but as I mentioned there is a line that’s always bothered me: “The only one for me is you/And you for me.” They’re saying the same thing twice! What they mean to say is “The only one for me is you/And for you is me.” But that’s not what they’re saying. And the line is repeated. Okay, I know I should relax. After all, it’s a damn good song. (By the way, I remember a friend telling me it’s the “And how is the weather” line at the end that bothered her. We all have our own hang-ups, I suppose.) That hit was followed by another hit single, “She’d Rather Be With Me,” a ridiculously fun and enjoyable pop tune also written by Garry Bonner and Alan Gordon. That single’s flip side, “The Walking Song,” is also really good. It was written by Howard Kaylan and Al Nichol.

Garry Bonner and Alan Gordon wrote another of the band’s best songs, “You Know What I Mean.” It starts off as a catchy little number, but grows and has some interesting changes. It wasn’t as big a hit as the earlier two, but is a far more interesting song. They also wrote “She’s My Girl,” another very cool tune, that opens with a good bass line and features some unusual vocals. The first disc ends with an unlisted track, a jingle advertising Pepsi.

The second disc opens with “Sound Asleep,” a song written by the entire band, and another of the band’s more interesting tunes. Though at one point they drift into The Beatles’ “Tomorrow Never Knows” (approximately a minute in). The single’s flip side, “Umbassa The Dragon,” was also written by the entire band, and is an odd number, with the group making jungle noises and delivering some spoken word. That’s followed by Harry Nilsson’s “The Story Of Rock And Roll,” a song that was also recorded by The Monkees.

“Elenore” is another of the band’s big hits, reaching #6 on the Billboard Hot 100, and is another that has the entire band credited with its composition. As I mentioned earlier, this one has a line that always makes me laugh: “You’re my pride and joy, et cetera.” Howard Kaylan actually talks about that line in this collection’s liner notes: “A parody of ‘Happy Together.’ It was never intended to be a straightforward song. I would never have put, ‘Pride and joy, et cetera’ in a straightforward song.” So there you have it. “Elenore” was included on The Turtles Present The Battle Of The Bands. Another song from that album to be released as a single is “You Showed Me,” written by Jim McGuinn (also known as Roger McGuinn) and Gene Clark of The Byrds. This is another of my favorites, and it too reached #6 on the Billboard chart. (Mark Volman tells the story behind the song’s tempo in the liner notes.) Its flip side is a seriously cool track titled “Buzz Saw.”

“Lady-O” finds the band going in a different direction. It’s a pretty song with a string arrangement. It was written by Judee Sill, who would include her own version of the song on her 1971 self-titled debut record. Judee also did the string arrangement for The Turtles’ rendition. Another interesting track is “We Ain’t Gonna Party No More,” an anti-war song written by Howard Kaylan that was issued as the flip side to “Who Would Ever Think That I would Marry Margaret?” “We’ve got ignorance, pollution and so much more/If there’s one thing we don’t need, it’s your damn war/We ain’t gonna party no more.”

The second disc includes a previously unreleased early single mix of “How You Love Me,” with Howard Kaylan on lead vocals. Also originally unissued is the band’s cover of Jan & Arnie’s “Gas Money,” a fun and goofy early rock and roll tune. The last two singles in this collection are songs that were included on early Turtles records: “Eve Of Destruction” (which was on the band’s first studio album) and “Me About You” (which was on the band’s third album, Happy Together). The Turtles’ version of “Eve Of Destruction” doesn’t have the “Yeah my blood’s so mad it feels like coagulating” verse. The second disc then ends with an unlisted track, as did the first disc. This time it’s a Camaro advertisement jingle, with the lines “Turn the key, it turns you on, yeah” and “You’re on a groovy trip with Camaro.”

Disc One
Disc Two
All The Singles is scheduled to be released on August 19, 2016 on Manifesto Records.
Posted by Michael Doherty at 10:04 PM