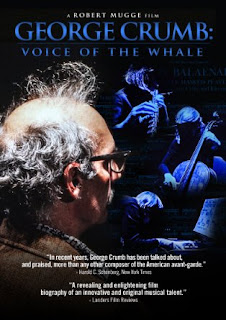 George Crumb is an avant-garde composer known for using contrasting musical styles in his often-beautiful compositions. At the heart of the documentary film George Crumb: Voice Of The Whale, originally released in 1976 and now available on DVD, is the performance of one of his compositions, “Vox Balaenae.” This is a piece written for flute, piano and cello, and inspired by the songs of whales.

The film opens with the performance of this piece, without any introduction or information to get us situated. It just gets right to the music, and quickly immerses us in the piece, the camera extremely close on each of the instruments, which for me calls to mind that great “Goin’ Down” segment from The Monkees. Everything is presented in a blue light, and which also gives us the feel of being in the depths of the ocean. There are no wide shots featuring all of the performers, and no chance to see the performance space, the musicians surrounded by darkness, which also keeps the focus on the music itself, and the way it’s played. The musicians wear masks, with the pianist wearing a gas mask, which looks creepy in that blue light. The first section of the piece seems to include a strange nod to “Also Sprach Zarathustra.”

Then, just when we’re completely hooked, the film cuts to a conversation between George Crumb and fellow composer Richard Wernick, which is presented in a green light (Wernick is also credited as the film’s music director). They discuss the connection between events and Crumb’s compositions. “Black Angels,” Crumb says, “came out of the Vietnam situation.” He also mentions the influences he took from West Virginia on his music. “I guess that I’ve always been interested in sounds and possibilities of new sounds as expressive devices in the music,” he says. He shows and demonstrates some of the more unusual instruments he’s used (I want to get one of those nipple gongs). Interestingly, they also talk about the look of his compositions on paper, the aesthetic value of the sheet music, something we might not ordinarily consider. We see brief flashes of examples, the music written out in a peace symbol or in other interesting, pleasing patterns.

Also interviewed in the film is George’s wife, Elizabeth Crumb, who provides a bit more information on Crumb’s personal life. The focus, however, is the music, and the film returns to “Vox Balaenae” throughout, giving us a movement or two at a time. The second section reminds me a bit of some of the Grateful Dead’s improvised “Space” segments, getting strange sounds from familiar instruments, playing them in perhaps unexpected ways. For example, the pianist works the piano strings rather than the keys. And later on, we do get shots of all three musicians together (though still without any sense of the space around them). The musicians, by the way, are Barbara Haffner on cello, Carole Morgan on flute and Lambert Orkis on piano.

George Crumb: Voice Of The Whale was produced and directed by Robert Mugge, and was released on DVD on June 24, 2016 through MVD Visual. The DVD contains no special features.

I’ve reviewed a few other Robert Mugge music-related documentaries. If you’re curious about them, here are the links:
Posted by Michael Doherty at 4:53 PM