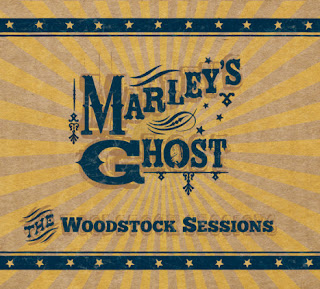 Marley’s Ghost is celebrating the band’s thirtieth year together with the release of a new CD, The Woodstock Sessions. This follows their 2012 release, Jubilee, which was one of my favorite CDs of that year. While Jubilee featured a lot of original material, The Woodstock Sessions focuses mostly on covers of traditional songs. In fact, there’s only one song co-written by Dan Wheetman. I’ve come to expect great things from this band, and they haven’t let me down yet. The music on this excellent new release combines folk, country, blues and gospel elements. The album was recorded at Levon Helm Studios in Woodstock, New York, and was produced by Larry Campbell, who also plays several instruments on it.

The Woodstock Sessions opens with a very cool moody country rendition of “Blind Fiddler,” telling the story of a man fallen on hard times after losing his sight while on a job. And with a title like “Blind Fiddler,” you can expect some nice work on fiddle. What I like is that the fiddle is actually used somewhat sparingly, so when it comes in it has more power, more poignancy, and feels like it’s coming from the character in the song, which is great. And I love the instrumental section toward the end, which the fiddle leads. (That’s Larry Campbell on fiddle, by the way.) The fiddle then leads off the next tune, “Ain’t That Trouble In Mind” (not to be confused with “Trouble In Mind”), this version starting off with lines from “I’m Troubled” (“If trouble doesn’t kill me, I’ll live a long time”). This is one to get you on your feet, a happy-sounding country dance number.

Marley’s Ghost then dips into the blues with “Prodigal Son,” a tune written by Robert Wilkins (though listed as “Traditional” in the CD liner notes), and also recorded by The Rolling Stones (it’s on their Beggars Banquet album). I really love how they handle the vocals here, combining blues and gospel. They follow that with a really good rendition of “The Unconstant Lover,” a song that is also known as “On Top Of Old Smokey,” with the lines “On top of old Smokey/All covered with snow/I lost my true lover/For courtin' too slow.” It’s sad, but even in my forties I can’t help but hear “On Top Of Spaghetti” in my head whenever I hear this song. Is there some cure for that?

Marley’s Ghost also delivers a great rendition of “Stone Walls And Steel Bars,” a song written by Roy Marcum and Ray Pennington, and recorded by The Stanley Brothers. Their vocals are so bloody wonderful here – strong, honest, true. And I also really like that section on keys. And, holy moly, they follow that with a delightful and superb rendition of the gospel tune “Run On For A Long Time” (a song also known as “God’s Gonna Cut You Down” and “Run On”). Their excellent vocals are at the heart of this track, and this version has a joyful vibe. This track is a surprising highlight of this album. (I hear the group is now working on a gospel album, which is seriously exciting news.)

“Oh Sweet Wind” is an original composition by Dan Wheetman and Larry Campbell. It’s a mellow, sad, kind of pretty tune about a man after the death of his love. “I breathed her name into the air/Her voice so sweet did not reply/There was no answer from the wood/No answer from the earth or sky.” It has an Irish folk feel, particularly in the instrumental section.

They do an interesting version of “In The Pines” – interesting because they do it as a blues number, like Leadbelly, but with the lyrics about the train from the Bill Monroe bluegrass version. And the vocals at times have something of a gospel feel. This song is also known as “Where Did You Sleep Last Night.” Marley’s Ghost’s rendition of “Louisville Burglar” has a sound that is somehow simultaneously jubilant and relaxed, though the lyrics are about being sent to jail. This track is another highlight for me. This CD concludes with “Uncle Joe,” a bluegrass song that opens with some fiddle. This version features additional lyrics by Dan Wheetman.

The Woodstock Sessions is scheduled to be released July 15, 2016 on Safe Arts Records.
Posted by Michael Doherty at 11:38 PM