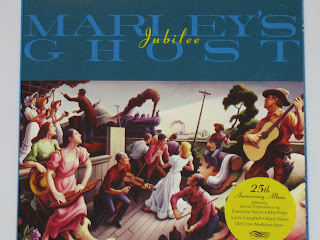 I got turned onto Marley's Ghost a couple of years ago, when they released Ghost Town, which was one of the best albums from that year. So my expectations were quite high when I popped in their new disc, Jubilee. Well, as good as Ghost Town is, Jubilee is even better.

This is an amazingly good CD, with absolutely no filler. And in addition to some excellent original material (such as "Rollin'" and "South For A Change"), there are some darn good covers (including a cover of "It's All Over Now" that completely blew me away). And to top it all off, this album features some wonderful guest players, including John Prine and Emmylou Harris. It really doesn't get much better than this.

Jubilee was produced by Cowboy Jack Clement, who also makes a guest vocal appearance on the band's cover of "It's All Over Now."

Jubilee opens with "Rollin'," a good traveling song which starts, "Way out yonder where the road disappears/I've been trying to get to that place for years/But the longer I drive, day after day/Well, that old road keeps slippin' away." Those are good lines, but the lyrics that made me completely fall for this song are these: "If I ever stop rollin', what would I be/I'd be a shipwrecked sailor staring out at the sea." Nice.

"Rollin'" was written by Dan Wheetman, and it features Marty Stuart on mandolin.

"Wake Up Mama" is a fun rocking country tune, also written by lead vocalist/guitarist Dan Wheetman. I love that loose, jangly piano that comes in about a minute and a half into the song. It's a good track, but that piano makes it a great track. This song has a lot of energy, and a good vibe. Turn up the volume on this one.

"The Blues Are Callin'"

"The Blues Are Callin'" is some sweet slow country blues, like tumbleweed blues. Go ahead, cry on your gal's shoulder, or if you have no gal, cry into your beer. Another original tune written by Dan Wheetman, "The Blues Are Callin'" features lines like, "There on my table the whiskey glass says go ahead and fill me up/And I will kill the emptiness you feel inside." Mike Phelan takes lead vocal duties on this one, and his delivery has a smooth, rich and emotional quality that is perfect.

"This Old Road" is the title track to Kris Kristofferson's 2006 release.

I have heard a lot of versions of "It's All Over Now" over the years, and this is far and away the best rendition ever. I'm not exaggerating. It's better than those by the Rolling Stones, Grateful Dead, and Rod Stewart.

Old Crow Medicine Show is featured on this track. So there are two fiddle players, and that's some kind of double bliss. And, as mentioned, Cowboy Jack Clement makes a guest appearance on vocals (and listen to the laughter in the background - this definitely feels like a party). I love the vocals on this track. Different players take turns on different verses. This song is just so much fun. I cannot stress enough how much I love this track.

"It's All Over Now" was written by Bobby Womack and Shirley Womack, and originally done by The Valentinos.

"South For A Change"

"South For A Change" is a wonderful tune. This kind of music always makes me smile - that jazzy old timey country type of treat. And though this tune feels like old gem unearthed and still shining, it's actually an original written by Dan Wheetman.

All the players get a chance to strut their stuff on this one. And, as if to somehow improve on the previous track, this song features not two, but three fiddle players: Larry Franklin, Kenny Sears and Joe Spivey. And there is some wonderful work on horns - Roger Bissell on trombone, Denis Solee on clarinet, and Bernie Walker on trumpet. I love when the horns answer the pedal steel. This song is joy.

John Prine joined the band on a Kris Kristofferson song, and now the incomparable Emmylou Harris joins them on a John Prine song. Emmylou Harris has one of those voices that I just can't get enough of. I admit it, I have something of a crush on her. Listen to this song, and you will too. She and Dan Wheetman sound great together.

"Lonely Night" is a sweet and sad (yet upbeat) country tune. It's one of those songs that makes you feel good and sad simultaneously. This one was written by Mike Phelan, who also sings lead. Here is a taste of the lyrics: "I know there'll be no sleep tonight/This room's too crowded with your memory." "Lonely Night" features Marty Stuart on mandolin.

"She Made Me Lose My Blues"

Jubilee ends with "She Made Me Lose My Blues," an upbeat tune that features some yodeling. You can't go wrong ending an album with a yodeling song. This song also features Larry Campbell on electric guitar.

Marley's Ghost is Dan Wheetman on vocals, acoustic guitar, bass and fiddle; Jon Wilcox on mandolin and vocals; Jerry Fletcher on piano, accordion, B3, vocals and shaker; Mike Phelan on electric guitar, dobro, fiddle and vocals; and Ed Littlefield Jr. on pedal steel guitar and vocals. Joining them is Byron House on bass and Don Heffington on drums and shaker.