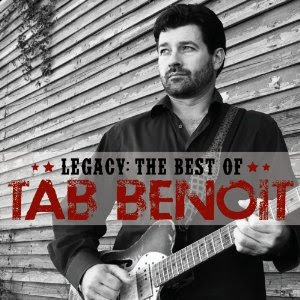 Legacy: The Best Of Tab Benoit is a collection of blues tunes that Tab Benoit recorded between 1998 and 2011. It's a good mix of original material and some interesting covers (particularly Buffalo Springfield's "For What's It's Worth" and Otis Redding's "These Arms Of Mine"). Tab Benoit is based in Louisiana, and that state plays an important part in his music. You can hear it in all of the songs, but especially in ones like "Muddy Bottom Blues." All of the tracks on this CD were previously released on other albums.

Legacy: The Best Of Tab Benoit opens with a cool track from his 2007 release Power Of The Pontchartrain. This is good, no-frills, no-nonsense blues rock, driven by the vocals and of course the electric guitar. Here is a taste of the lyrics: "The wind will blow, the rain can pour/The deluge breaks, the tempest roars/But in the storm, my spirit sings/Shelter me, lord, underneath your wing."

"Shelter Me" was written by Julie Miller and Stephen Miller. Buddy Miller included this song on his 2004 release, Universal United House Of Prayer.

Halloween is the best holiday of the year, and there are some fantastic songs associated with the day, and possibly the best is Screamin' Jay Hawkins' "I Put A Spell On You." A lot of folks have covered that song over the years, including Creedence Clearwater Revival, Nina Simone and Joe Cocker.

Tab Benoit's blues version is a slow, groovy gem. It has an easy groove, which is an interesting take on the song. There is something almost pretty about it at times. I particularly like the organ work by Bruce Katz. This track also features Kenny Neal on guitar. This track was originally included on Tab Benoit's 1999 release, Homesick For The Road.

"For What It's Worth"

I was surprised by how well "For What It's Worth" works as blues. Written by Stephen Stills, this song first appeared as a single by Buffalo Springfield in 1967. A few months ago, Martin Sexton included a rendition of it on his EP Fall Like Rain. I think what makes Tab Benoit's version work as well as it does is his voice. There is something slightly rough, but completely honest about his voice. It has the earnest quality necessary for this song. This version, however, has a strange ending, just sort of petering out.

Oh yes, "Muddy Bottom Blues" is a fun rockin' blues tune. It's a song about a fishing trip gone wrong, with the boat stuck in the mud. This one really feels like Louisiana, partially because of its subject of course. But really, this is just a damned good and lively song. And it's done by just a trio of musicians: Tab Benoit on guitar and vocals, Carl Dufrene on bass, and Darryl White on drums. What a lot of glorious noise these three make.

Written by Tab Benoit, this song features lyrics like, "Hey, it's too soft to walk and it's too hard to swim/And you can scream and holler, nobody hears a thing." This is one of my favorites from this collection. It was originally included on the 2002 release, Wetlands.

"Darkness" is another song performed by that trio, this one from The Sea Saint Sessions (2003). I love the emotion in Tab Benoit's voice, the weariness, the weight - it's fantastic. This one was also written by Tab Benoit. Here is a taste of the lyrics: "You know I love you/Oh, but I did you wrong/And we both made our choices/But it's time to move on/So please please forgive me/And let's walk side by side/And fill in the darkness between you and I." And he follows those lines with a wonderful lead guitar part that seems to speak, cry, and beg on its own. This is an excellent song.

"Comin' On Strong" is one of this CD's biggest surprises. It's a somewhat mellow country tune. Yes, that's right, and Tab Benoit plays pedal steel. There is also banjo and fiddle. There is actually a really nice fiddle section by Waylon Thibodeaux. "Comin' On Strong" was written by Billy Joe Shaver, who also provides vocals on this track. This track was originally included on Brother To The Blues (2006).

"Medicine" is a nice, heavy blues number. And it has that great steady thump of the drum like a warning, like an advancing, dangerous, angry beast. Bring him his medicine, for pete's sake. "Medicine" is the title track from his 2011 release.

"These Arms Of Mine"

I love Otis Redding, but often covers of his material don't come anywhere close to capturing the essence, the soul of the originals. But Tab Benoit does a great job with "These Arms Of Mine." He keeps it simple, lets the song carry him. And his voice really works well with the song. It's an excellent rendition, and originally appeared on Wetlands.

Legacy concludes with two live cuts. The first, "New Orleans Ladies," is a sweet, slower tune that features Jimmy Hall on harmonica. It's from Night Train To Nashville (2008).

The second is "Bayou Boogie." Tab Benoit asks at the beginning, "If we give you the boogie, can you handle it?" It may seem a bit condescending, but this is a damn fun song. It's fast-paced boogie, and it features Jimmy Carpenter on saxophone. This one will likely exhaust you if surrender to it and dance the whole thing, approximately ten minutes' worth of boogie. Enjoy.

CD Track List
Legacy: The Best Of Tab Benoit was released on April 3, 2012 through Telarc, a division of Concord Music Group.
Posted by Michael Doherty at 11:13 AM