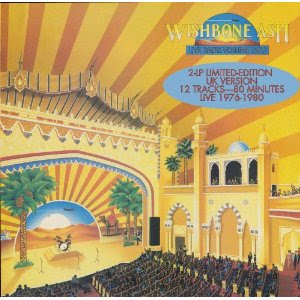 Wishbone Ash is a rock band from England that formed at the end of the 1960s. In 1973, they released a live album titled Live Dates. It was one of their most popular records, and so in 1980, they released another live album, this one titled Live Dates Volume Two. The first 25,000 copies of that album included a second record. Subsequent pressings had only the first record. This special CD issue of Live Dates Volume Two contains all the tracks from both records. These songs are from a variety of concerts from 1976 to 1980.

I grew up in the seventies and eighties, and yet I had never really heard this band. I expected some of these tracks to ring a bell in some hidden, neglected place in my memory. But no. I did listen to a lot of Deep Purple and Rush as a child, and probably would have dug this had I heard it then. But now it's a bit much for me. After all, this is nearly eighty minutes of hard and progressive rock. These guys are clearly good musicians, but I can listen to hard rock for only so long before I get bored. That being said, there are some good tunes on this album, and some good performances.

"Doctor" is a fun, energetic rock tune, and is my favorite from this release. It opens with the lines, "Doctor, can you help me please/I'm laying on the floor/I need a shot of something like you gave me once before." There are some moments where their voices sound completely fantastic together (particularly on "If I feed your every need, then you won't feel so empty/In my web, I'll bet your life you're dead before you're thirty").

This is a really good rock song, and there is a section where the two lead guitars do a call-and-response bit, and then join together in some 1970s guitar showboating that is delicious.

"F.U.B.B." is a nice, long instrumental track. I love the bass, which drew me in from the start and then kept the groove going. Then nearly four minutes in, the song begins to take you on a journey, like up a mountain to some palace of rock wisdom and glory. Then around the six-minute mark, the songs takes another turn, seeming to pick up speed, as if becoming impatient, or waking to a new level. And through it all, it's the bass that really makes me enjoy this tune.

"Lorelei" was the first track on the second LP. This one has a pretty good groove, and again, it's the bass that I really dig. But there are good performances all around on this track. And it has an exploratory feel, which I appreciate. Here is a taste of the lyrics: "Mystery and danger was all I got from you/Oh oh, you mesmerized me/Oh oh, you tantalized me/Like the singing of the lorelei."

"Persephone" was originally included on the band's 1974 studio release, There's The Rub (the title being a reference to Hamlet's most famous soliloquy).

"Time Was" is a really fun track, when the lead electric guitar doesn't get in the way. This is closer to straight rock and roll. This also happens to be the earliest tune of the collection, the original version appearing on the band's 1972 record, Argus. Here is a bit of the lyrics: "Time was when I had you around/I was a strong man/I need you to help me make a change/Be a new man."

Live Dates Volume Two ends with "No Easy Road," another fun rock and roll tune. Again, this one is from early in the band's career, originally appearing on the 1973 studio release Wishbone Four. The chorus is, "Watch me join the circus/Watch me steal the show/There ain't no easy money/There ain't no easy road." I really like the backing vocals repeating, "It ain't easy." However, this song doesn't need to be seven minutes long, as there aren't many places for it to go, and it gets a bit repetitive.

This special re-issue of Live Dates Volume Two was released on April 3, 2012 through Real Gone Music.
Posted by Michael Doherty at 4:14 PM