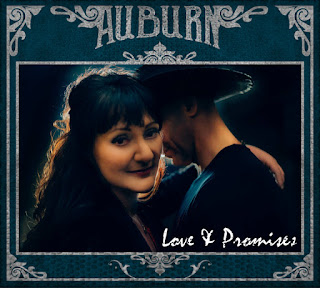 Since British band Auburn reformed in 2011, they’ve released several albums, including last year’s Mixed Feelings (the one that turned me on to the band). Mixed Feelings and the band’s previous release, Nashville, were both recorded in Nashville, Tennessee. The band’s new album, Love & Promises, was likewise recorded in Nashville, and, as with Mixed Feelings, features musicians from the area rather than the official band members. Some of them, like Mark Fain and Justin Moses, also played on last year’s release. Thomm Jutz, whom you might know from his work with Nanci Griffith, produced the CD and plays guitar on it. This album features all original material, written or co-written by the band’s founder and vocalist, Liz Lenten.

The CD opens with “Asleep,” the first lines of which are whispered to us, like a secret, like a confession: “I don’t want to wake up in the morning/I don’t want to get out of my bed.” Or perhaps like someone holding onto the night, as she soon sings, “I don’t want to go back to the real world/To my humdrum life/Even though it’s unnerving/This craziness just feels right.” And there is a dreamlike quality to the song, though of course it’s a lucid dream. “I just want to be asleep/To dream about you.” Then “In My Blood” has a bit of blues, a bit of pop. Interestingly, Liz employs a sort of whispered vocal delivery here too at times, but to a totally different effect.

“Love & Promises,” the CD’s title track, has something of a sweet, relaxed pop vibe, and is a different look at love, opening with the lines “I don’t need love and promises/I just want someone to hold.” But it sounds like a love song, which perhaps indicates contradictory desires. “I don’t need wedding dresses/Or a little band of gold/I just want sweet caresses/To warm me when it’s cold.” That’s followed by “Miss You Blues,” which is a mellow, intimate blues number about how the nights are so long when you’re missing that special someone. “Each minute lasts a blue moon, even my pulse is running slow.”

“Cross The Deep Atlantic” is an adorable duet, sounding almost like a children’s song, or lullaby with lines like “I’d cross the deep Atlantic/In a little rowing boat/Just to have you close to me.” This is another love song that professes not to be a love song, as they sing, “’Cause I know this isn’t love” and “I know it’s not forever.” The male vocals are provided by Chet O’Keefe, who has his own new CD out (which was released on the same day as this Auburn disc). I can’t help but love this song.

“Stupid Game” features Liz’s vocals with just acoustic guitar accompaniment, giving stronger focus to the lyrics and to Liz’s emotional delivery, especially to lines like “Please don’t take me apart/When you break my heart.” There is a vulnerability in her delivery that works so well for this song. “If Everyone Was Listening” is the one song on the CD that Liz Lenten co-wrote with Mark Gustavino, who is one of the official members of Auburn. “What would you say/If you could talk/In a language anyone could understand.”

Musicians on this CD include Liz Lenten on lead vocals, Thomm Jutz on guitar, Evan Hutchings on drums, Mark Fain on bass, Jen Gunderman on keyboards and accordion, Justin Moses on dobro and Britt Savage on backing vocals.