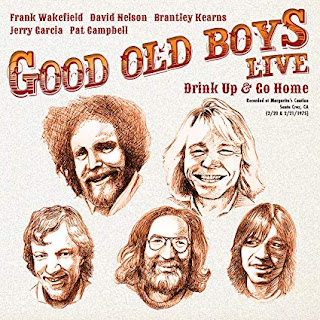 During the Grateful Dead’s break, from the end of October 1974 to the beginning of June 1976, Jerry Garcia was busy. In addition to a new Grateful Dead studio album (Blues For Allah) and a solo studio album (Reflections), he continued to perform with various folks, including a group called Good Old Boys, which featured David Nelson on guitar. Garcia had, as you likely know, previously played with Nelson in New Riders Of The Purple Sage. The group also included Frank Wakefield on mandolin, Brantley Kearns on fiddle and Pat Campbell on bass. Jerry Garcia played banjo, as he did a couple of years earlier with Old & In The Way. Now a live recording of this group has surfaced, and has been released as a two-disc set. The recordings are from February 20th and 21st, 1975, at a place called Margarita’s Cantina in Santa Cruz, California. And the sound is really good. That’s because it was recorded by John Cutler using Bear’s equipment.

The first disc opens with a brief introduction: “We’re the Good Old Boys, and we’re going to lay some genuine bluegrass on you here tonight.” And then they go right into “Ashes Of Love,” which was the lead-off track on the band’s studio release Pistol Packin’ Mama. It is a pleasant bluegrass tune with plenty of good playing. “Your every wish was my command/My heart tells me I must forget/I loved you then, I love you yet.” That’s followed by a song that will be familiar to Grateful Dead fans, “Deep Elem Blues.” Interestingly, this rendition features Frank Wakefield on lead vocals, not Jerry Garcia. But there is a lot of good banjo playing on it. There is also some wonderful work on fiddle by Brantley Kearns. I’ve been fortunate enough to see Brantley perform several times here in Los Angeles with a variety of folks. He is one hell of a good fiddler. There are band introductions following “Deep Elem Blues.” Jerry Garcia is introduced thus: “And this fellah behind me on the banjo, he’s created a lot of different styles, and he’s doing, uh, he does jazz music on the guitar and he plays awful good bluegrass banjo.”

“Dim Lights, Thick Smoke” (here simply titled “Dim Lights”) is one of my favorite tracks on the first disc. It features some wonderful blending of voices and great stuff on mandolin. That’s followed by “Toy Heart,” a totally enjoyable song with some more nice stuff on banjo. All of these first four songs were included on Pistol Packin’ Mama. They follow that with a tune that was not included on that studio album, “Fireball Mail.” It’s introduced as “a banjo tune where everybody get to do a little picking,” and somebody there shouts out for Garcia. This is a fun instrumental number, and yes, everyone gets a chance to shine on it. Another highlight of the first disc is “I’ll Never Make You Blue,” in large part because of the vocals. But it also has a cool vibe.

“All The Good Times” comes on fast, the way we often want our bluegrass tunes to, and the crowd is immediately into it. The one is a total delight, and it features Jerry Garcia on vocals, so, yes, it is one of my favorite tracks. Things continue moving with “She’s No Angel,” a playful number. “You’d like to meet her/Your conscience says no/Obey your conscience/Turn around, boy, and go.” That’s followed by a nice rendition of “Here To Get My Baby Out Of Jail,” a song Jerry Garcia would revisit later (it would be included on the Almost Acoustic album). We then get another instrumental number, “Wildwood Flower,” which has a cheerful tone. It gets me smiling, and gets the audience clapping along. I love Dave Nelson’s work on guitar. The first disc concludes with “Teardrops In My Eyes.” “I found out what they say is true/I hope someday that you’ll be blue.”

The second disc opens with “Lonesome Road Blues,” which seems to already be in progress. The lyrics to this one are basically the same as “Goin’ Down The Road Feeling Bad.” And in fact at the end of the song, they tell the crowd, “We’re feeling pretty good, but that was ‘Goin’ Down The Road Feeling Bad.’” That’s followed by “Long Gone” and then “Leave Well Enough Alone,” two tunes that were included on Pistol Packin’ Mama. We then get a song called “White House Blues,” a title that seems rather timely. But this is an old song about William McKinley, and particularly about his assassination. (Oh, I can’t help but wish that part were timely as well.) “The doc came a-running, pulled off his specs/He said to McKinley, ‘Better cash in your checks/You’re bound to die, you’re bound to die.’”

When Deadheads hear the phrase “T for Texas,” they generally think of the song “New Minglewood Blues,” where the line is “It's T for Texas, yes, and it's T for Timbuctoo.” But on this release the Good Old Boys cover a song titled “T For Texas,” with the lines “Now T for Texas, T for Tennessee/Now T for Thelma, made a wreck of me.” Interestingly, this song also has the line “I'd rather drink muddy water, sleep in a hollow log,” which also finds its way into “I Know You Rider” (early versions of that song by the Grateful Dead include the verse with that line, though the band later dropped it from the tune). This track features some cool work by Pat Campbell on bass. “T For Texas” is followed by “Jesus Loves His Mandolin Player,” an instrumental track, a mandolin solo. Then, after “First Whippoorwill,” we get another instrumental track, “New Camptown Races,” a fairly fast-paced and fun tune.

Before “Pistol Packin’ Mama” (here titled “Pistol Packing Mama”), they mention the studio album which apparently they had just recorded. “Garcia produced it, and it was really fun.” Well, the song is a whole lot of fun, a total delight with a lot of energy, one of my favorite tracks from the second disc. That’s followed by another instrumental, “Rawhide,” which is also a high-energy tune. We then drift into bluegrass gospel territory with “Jerusalem Moan” (which is also known as “Don’t You Hear Jerusalem Moan” and “Hear Jerusalem Moan”). That’s followed by “Drink Up & Go Home,” which features Jerry Garcia on lead vocals. I love his passionate delivery here. This is a song that Jerry also performed with David Grisman. The second disc then concludes with “Orange Blossom Special,” featuring some fantastic work by Brantley Kearns on fiddle. This is a rowdy, wonderful rendition, with some playful touches. By the way, on the back of the CD case, it indicates that this is an instrumental track, but that just isn’t so.