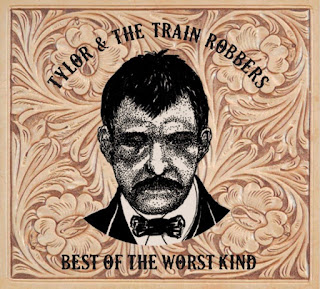 Tylor & The Train Robbers are a band based in Boise, Idaho, offering some delicious music in the folk and country rock vein. I love this band’s sound, but the lyrics really make the band’s new release, Best Of The Worst Kind, stand out. The album features all original material, written or co-written by lead vocalist and rhythm guitarist Tylor Ketchum. The band also includes Jason Bushman on bass and backing vocals, Johnny Pisano on lead guitar and mandolin, and Flip Perkins on drums and percussion. The album also features a few guest musicians on certain tracks. Best Of The Worst Kind follows the group’s 2017 release, Gravel.

The album opens with “Lost And Lonely Miles,” a cool country tune that I should add to my road trip play list, with lines like “Looking out over the crack in the windshield/As the fog covers up the white line” and “The road I travel is bound to wind/And the road less traveled is hard to find.” As I mentioned, this album boasts some good lyrics. I also really like Tylor Ketchum’s voice, which is in the same general realm as that of folks like Steve Owen and Jay Souza. Brian Davies joins the group on pedal steel on this track, delivering some nice work, particularly toward the end. Then “Before It’s Too Late” starts more in the folk realm. Here is a taste of the lyrics: “We’ve got to go before it’s too late/We can ditch this town or stick around/Stay content or take a break.” There is something friendly and uplifting about the sound of this music, which I appreciate. These days it seems we’re all looking for things to raise our spirits and remind us that most people are still human.

The first line of “Good At Bad News” caught me by surprise and made me laugh: “I’ll take a lottery ticket and a lighter please.” This is a fun country tune, a song to get you and your partner on your feel, kicking up your heels and so on. I love these lines: “Me and my baby can handle the blues/She deserves to win, but I’ve been known to lose/Me and my baby are good at bad news.” Yeah, the song has a strange sort of optimism. Jennifer Pisano provides vocals on this track, and there is some nice work on guitar too. That’s followed by “Storyteller,” which has a mellower, sweeter vibe, the lyrics delivered in a style that is almost spoken word at first. “Worn out flannels and pocket shirts/Forget the directions, try the wrong way first/These are just a few things that I remember.” This is a really engaging song. Brian Davies joins the group again on pedal steel for this one. Then there is something kind of pretty about “Still Getting High,” a song that should speak strongly to people. Here is a taste of the lyrics: “What I’d like more is to care less/Forget, forgive, peace, love and rock and roll/Well, I wish our world forgiveness so damn oblivious/To what our future has to hold.” And the thought this song leaves us with is this: “If we could all get along a little more/We might be okay.”

Tom “Black Jack” Ketchum was a cowboy and criminal who was hanged in 1901. He’s a distant relative of Tylor Ketchum, and is the inspiration behind the band’s name. Knowing all that makes the opening line of “The Ballad Of Black Jack Ketchum” rather humorous: “Well, my daddy always said you’re only as good as who you’re hanging with.” The song’s second line provides the album with its title: “So I was hanging with the best of the worst kind.” Yeah, it’s sung from the perspective of Tom Ketchum, which is interesting, and tells a wild tale. “Fumblin’ For Rhymes” is a song about being a traveling musician, about chasing one’s dreams. Sure, there are a lot of songs on this subject, but this is a good tune. “Ticking like a train rolling down these tracks/Fumblin’ for rhymes to write a song that will last.”

“Few And Far Between” is a wonderful folk song, one of my personal favorites of this album. It’s a bittersweet love song, delivered as a duet, Jennifer Pisano providing the beautiful female vocals. “It’s hard I know/Being by my side/Is few and far between/All that you mean to me/Well, if so, maybe we’re better off at it alone.” I also really like the mandolin on this track. “Leave the leaving up to me/And I’ll bear the shame.” Then in “Construction,” the lines that stand out for me are “Slowing down at the yellow light until it turns to red/Well, I think I could have made it/But I questioned myself instead” and “It seems everywhere I go I am in somebody else’s way.” Yet the song has a bright, fun vibe. The album ends with another excellent folk song, “Place Like This,” this one featuring cello, an instrument I always appreciate. Both Melissa Wilson and Bernie Reilly play cello on this track. “I think we choose who we want to be/Some look to God to set them free/This here bottle does that for me/But what’s that to you.”

CD Track List
Best Of The Worst Kind is scheduled to be released on April 26, 2019, the anniversary of the execution of Tom “Black Jack” Ketchum.
Posted by Michael Doherty at 8:13 PM