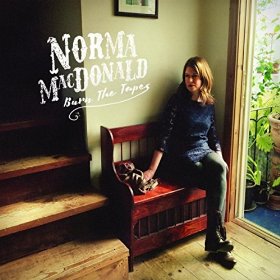 I first popped in Norma MacDonald’s new CD, Burn The Tapes, after a long day at work, with the intention of just listening to a song or two to get a feel for what she’s like, having never heard her solo work before. I knew Norma MacDonald only from her work with Bend The River (last year’s So Long Joan Fontaine is an excellent album, by the way). But I was immediately drawn in by her voice, by its warmth and beauty, and by the songs themselves. Burn The Tapes features original material, and she proves herself to be an incredibly talented songwriter as well as singer. I love these lines from “To Nebraska”: “It made you feel all right, it made you feel better/It made you feel someday instead of never.” “Before We Say Goodnight” is the only song whose lyrics she did not write (they were written by fellow Bend The River bandmate Ronok Sarkar). Norma MacDonald is joined on this album by Bend The River’s Adam Fine, Phil Sedore, and Matt Myer, and by several other talented musicians and singers, including Kim Harris, whose own Only The Mighty is another album that is definitely worth listening to. I feel like I’ve said this a lot lately, but fantastic music continues to come to us from Canada. Every track on this disc is strong, and I’d be surprised if this CD didn’t end up on my list of favorite albums of the year.

The CD opens with “Company,” a beautiful song. There is a bit of an ache in Norma's voice that you’ll feel yourself as she sings, “At the edge of the water, at the edge of the world/Thought I’d always be your small town city girl.” Adding to the emotional impact of this song is the fact that what she needs is so simple, so basic: “I sure do miss your company.” It’s so simply stated, that you end up feeling so much behind it. Dale Murray plays pedal steel on this track. Kim Harris and Gabrielle Papillon provide backing vocals.

“Company” is followed by “Blue As A Jay,” my personal favorite song on this disc, and one of the best songs I’ve heard so far this year. It opens sweetly, with Norma singing, “I’m never lost for something to say/I’m bold as a gull and blue as a jay.” Dan MacCormack plays banjo on this track, and it’s interesting how the banjo works with the percussion to create a compelling, almost haunting sound in those sections. This is a song that just completely owns me. I could listen to it all day. “And oh, can I take you home/Can I stay with you ‘til the morning/And why oh why does this feeling die/And these lonesome blue some a-callin’.” (By the way, you can also hear Dan MacCormack on banjo on So Long Joan Fontaine.)

As much as I love banjo, I’m even more of a sucker for cello, and “You Can’t Carry It Around” features Phil Sedore on cello. It also features some gorgeous backing vocals by Kim Harris and Gabrielle Papillon. And check out these lyrics: “Talking in a voice like an old cathedral bell/Waiting for a chance to pour your heart not made of stone/And you want to wear it like a jewel in your crown/And you want to shout from mountains all you’ve lost is found/But you can’t carry it around.” Wonderful, right? I also love the way the backing vocals work with Norma’s lead vocals on “Old Song,” particularly Gabe Minnikin’s vocals, on the line “It’s an old song you’ve been playing too long.” The results are so enjoyable. “Old Song” also provides this album with its title in the lines, “I’m not saying you should burn the tapes/I’m just saying let’s see what difference that it makes.”

Gabe Minnikin provides the second set of lead vocals on the duet, “Lighten Up,” a song that begins with some dark-sounding percussion. This one features some really good and interesting lyrics, Norma starting the song with these lines: “My heart is heavy like old books in a trunk/That I read back in high school/While my friends got drunk/Been dragging behind me since I was a kid/I should’ve left some behind me/Oh, but I never did.” And Gabe takes the second verse: “My heart is aching like that tooth I lost/After that misunderstanding/In the church parking lot/Oh, how I pushed it, how I worked it loose/But some things they hold rooted/And sometimes it’s no use.” This song grabs me every time, and is a highlight of the disc.

“Hard To Get Back” is another highlight, Norma's voice one of both innocence and experience. “Back in the day we used to say/You can’t stand still if it’s not in your bones/And we were right/And chased the lights/But I never thought it’d be so hard to get back home.” Phil Sedore plays accordion, and Dan MacCormack plays mandolin on this track.

CD Track List
Burn The Tapes was released on June 9, 2015. I can’t wait to hear more from Norma MacDonald. I need to get her other three CDs soon.
Posted by Michael Doherty at 1:16 PM