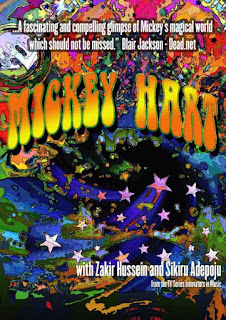 This DVD contains an episode of the Innovators In Music television series, which was filmed in 2010. It was shot at Mickey Hart’s home and studio in Sonoma County, California. Mickey is allowed to sort of narrate the show himself, though the filmed interviews. There is no introduction or information from outside sources. What the episode does is take us into the thoughts and drives of one of the world’s most interesting drummers.

Early on he mentions playing with the Grateful Dead and his other groups, saying, “All are part of my search for the meaning of life, and also what my place is in the infinite universe.” He talks about how even as a child he was drawn to the various sounds of things, from rain to wrecking balls. He says that music is “like nourishment for me.” And of course there is plenty of great drumming in this episode. We see Mickey perform in his studio, along with Zakir Hussein and Sikiru Adepoju.

This show also takes us into Mickey’s art studio, where he shows a bit of the process of creating his art. He talks about the relation between his painting (visual art) and his music, and how all of this comes from his philosophy and outlook on life and reality. “That’s what art is really all about: expressing the unknown in a form that you can share with someone else.”

The actual episode is only twenty-four minutes long, but the DVD contains plenty of bonus material. The first, Ballophone Jam, shows Mickey, Zakir and Sikiru performing in his studio, with touches of “Fire On The Mountain,” which Mickey co-wrote, and a bit of banter at the end. This is approximately eight minutes long. Mickey Hart On His Instruments has Mickey talking about some of his instruments and demonstrating them, including a nice, close look at the Beam, which Grateful Dead fans will recall from the “Drums” segment of those concerts. This feature is approximately eight minutes.

Obama Rap is a segment of Mickey, Zakir and Sikiru performing in the studio a song that uses samples from speeches. A bit of this is seen in the program. If you watch closely, you’ll see little typed notes taped to an instrument. One of them reads, “Obama & Limbaugh Convo.” This is approximately nine and a half minutes. The Beast Jam is another musical segment, in which Mickey plays the Beast, a set of large drums that Grateful Dead fans will remember.

The bonus material also includes interviews with both Sikiru Adepoju and Zakir Hussein. Sikiru talks about the talking drum and its uses, and plays it for us. The sticks he uses are actually rolled leather. He also talks about first meeting Mickey Hart. Zakir also talks about meeting Mickey Hart, and about combining tradition with modern methods in music, particularly in drumming. The Sikiru Adepoju interview is approximately twelve and a half minutes; the Zakir Hussein interview is approximately seven minutes.

Innovators In Music: Mickey Hart was directed by Daniel Berman, and was released on DVD on August 6, 2013.
Posted by Michael Doherty at 3:55 PM