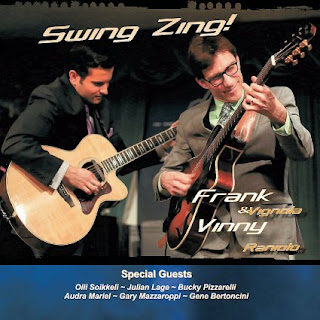 Frank Vignola and Vinny Raniolo are both incredibly talented guitarists who have recorded several albums together. On their newest, Swing Zing!, they do some excellent renditions of some of the most loved compositions of the 1920s through 1950s, including songs by Irving Berlin, Kurt Weill and Hoagy Carmichael. This is a completely delightful collection of tunes, featuring some fantastic playing. This CD also features some wonderful guest musicians, such as Olli Soikkeli, Julian Lage, Bucky Pizzarelli, Audra Mariel, Gary Mazzaroppi and Gene Bertoncini.

Swing Zing! opens with the wonderful standard “Cheek To Cheek,” written by Irving Berlin for the 1935 movie Top Hat. This is a seriously good and playful rendition, with a great swing, a perfect way to get this album off to the right start. It’s followed by “The Best Things In Life Are Free” (which is misprinted on the CD case as “The Best Things In Live Are Free,” but I imagine that will be corrected), a well-known song written by Ray Henderson (with lyrics by Buddy DeSylva and Lew Brown, though the version here is an instrumental). “The Best Things In Life Are Free” was used in the 1927 musical Good News, and later used in a 1956 film named after the song. The version on this CD has a joyous, bright sound which I love. Their rendition of “September Song” likewise has kind of a peppy spirit, which totally works. “September Song” was written by Kurt Weill, with lyrics by Maxwell Anderson (though again, this is an instrumental rendition).

The first version I ever heard of “Cry Me A River” was the rock version by Joe Cocker (from the Mad Dogs & Englishmen album), so I had something of a distorted idea of what the song was. “Cry Me A River” is a 1950s song written by Arthur Hamilton, and recorded by such folks as Julie London and Ella Fitzgerland, among others, before Joe Cocker released his rendition. The rendition by Frank Vignola and Vinny Raniolo is closer to Julie London’s take, being a slower, bluesy gem.

But one of my favorite tracks on this CD is “Joseph Joseph.” It is so much fun, so lively, so passionate – a total joy and delight to listen to. Guitarist Olli Soikkeli joins them on this track, helping to make this probably the best rendition I’ve ever heard of this song. It’s seriously impressive. Just sit back and enjoy.

Jazz vocalist Audra Mariel joins Frank Vignola and Vinny Raniolo on “All The Things You Are,” a song written by Jerome Kern, with lyrics by Oscar Hammerstein III, and the only track on this CD to include vocals. Audra Mariel sometimes dips low and sounds sultry, making this track another highlight of the album. This track also features bass player Gary Mazzaroppi and guitarist Bucky Pizzarelli.

One of the CD’s best tracks is the combination of Zequinha de Abreau’s “Tico Tico Nu Fuba” with Frank Vignola’s own “Djangomania.” Holy moly, this track features some seriously impressive playing, and just gets better and better. Guitar fans are going to go berserk over this track, in the best possible way. The album ends sweetly, with the pretty “Peg O’ My Heart” paired with “I’m Confessin.’”

CD Track List
Swing Zing! was released on… Well, I’m not sure. The press sheet I received says it was released on June 5, 2015. Amazon lists April 1, 2015 as the release date. Frank Vignola’s official website lists March 3, 2015. So, who knows? CD Baby plays it safe, and simply lists 2015 as the release date. But anyway the point is the CD is available.

Frank Vignola has also recorded with David Grisman, and now I am anxious to get my hands on those CDs.
Posted by Michael Doherty at 4:50 PM