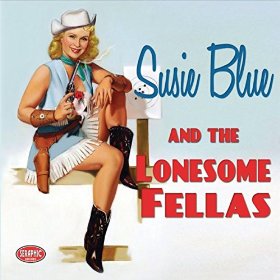 Solitaire Miles is known for her gorgeous jazz vocals. Her version of “Moonlight Serenade,” sung in French as “Serenade De Clair De Lune,” for example (from her Born To Be Blue album), is absolutely stunning. On her new release, Susie Blue And The Lonesome Fellas, she goes in a somewhat new direction, delving into country and western swing. The results are wonderful. Her band for this album includes some of the same folks who’ve played jazz with her, including Neal Alger, Larry Kohut and Phil Gratteau. And she also adds fiddle and slide guitar.

Solitaire Miles kicks off the new album with a fun rendition of Cindy Walker’s “I Hear You Talkin.’” It has more of an upbeat, positive feel than some earlier versions. There is some nice work on fiddle by Stuart Rosenberg, and on guitar by Neal Alger. It’s a great start to the album, and is followed by “I Gotta Have My Baby Back,” an excellent song written by Floyd Tillman, who had a country hit with it back in the late 1940s. Solitaire Miles’ version is perfect, with vocals both smooth and heartbreaking, as she tells us she can’t sleep and can’t eat because she misses her baby. I love the line “Jukebox is playing songs about you,” for it’s not songs that remind her of him, but songs directly about him, which is a stronger way of wording it. This is one of my favorite tracks of this CD, and I actually think it’s a better version than the original. When she sings “Come on home,” who could resist?

“Blue Lonlies” is a song written by Gwil Owen and David Olney. I would love to know what’s up with the spelling “Lonlies.” Shouldn’t it be “Lonelies”? Not that it’s a real word, either way. Well, no matter. It’s a good song. My favorite part is the sax solo by Eric Schneider, which briefly takes the song to a different level. I much prefer the following track, “I’m A Fool To Care,” composed by Ted Daffan (misspelled as “Daffin” on the CD case), and famously covered by Les Paul and Mary Ford in the 1950s. Solitaire Miles’ rendition is kind of sexy, and I love when she dips low for “to care” early on. I also love the guitar work during the instrumental section.

Solitaire Miles does the duet “I’ll Never Be Free,” written by Benny Benjamin and George David Weiss, and originally recorded by Kay Starr and Tennessee Ernie. Here it is Neal Alger taking on the second vocal duties, and doing a fine job. The vocals are at the heart of this track, of course, but TC Furlong’s work on slide guitar and Neal Alger’s work on guitar really add a lot to my enjoyment of this one. And then each musician has a moment to shine on “You Can’t Break My Heart” during the instrumental section, which features some light, breezy playing on the keys by Tom Hope, and then the fiddle engaged in a dance with the guitars.

Solitaire Miles opened this album with a Cindy Walker tune, and she returns twice more to compositions by that songwriter: “Me & The Man In The Moon” and “Love Is A Lingering Thing.” Cindy Walker is perhaps best known for writing “You Don’t Know Me,” which has been covered by many artists over the years, including Ray Charles and Patti Page. Willie Nelson even used it as the title for his 2006 album of Cindy Walker songs. “Me & The Man In The Moon” has a playful vibe, due mainly to Solitaire’s delightful vocal approach. I also really like Larry Kohut’s work on bass. And then it is Stuart Rosenberg on fiddle and TC Furlong on slide guitar that make “Love Is A Lingering Thing” something special.

Solitaire covers Lefty Frizzell’s “Cigarette And Coffee Blues.” This song originally came out in the 1950s, but it’s odd to hear a peppy song about smoking cigarettes these days, because you can’t help but think, “Don’t you know who awful those things are for you, how they make you smell and age you before your time?” She then ends the album with a really interesting take on “Ghost Riders In The Sky,” different from most versions I've heard, though similar to Kay Starr's approach. This track is one of the highlights for me, and I really like Eric Schneider's work on sax.

Musician joining Solitaire Miles on this release include Neal Alger on guitar and vocals, Eric Schneider on saxophone, Stuart Rosenberg on fiddle, TC Furlong on slide guitar, Tom Hope on piano, Larry Kohut on bass and Phil Gratteau on drums.

Susie Blue And The Lonesome Fellas was released on June 2, 2015 on Seraphic Records.
Posted by Michael Doherty at 5:52 PM