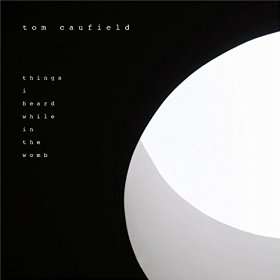 Tom Caufield is a talented guitarist working in the instrumental realm. I hesitate to call this music ambient, for that word often leads people to believe something is dull, and this music certainly isn’t dull. Also, when you think of ambient music, you sometimes think of music that doesn’t really go anywhere. And that is also not the case with Things I Heard While In The Womb, Tom Caufield’s new release. In fact, quite the opposite is true. With these tracks, Tom Caufield seems to be exploring many areas, looking both inward and outward, playing with themes as well as improvising. The first time I listened to this CD, it was late at night, and it worked perfectly. But I’ve listened to it in the afternoon as well, and it’s interesting, because the music strikes me in a different manner during the day, still relaxing me but also giving me a strange, positive energy. I wonder if other people will have a similar experience.

“Waif Among The Reeds”

The first track, “Waif Among The Reeds,” is the CD’s longest, at nearly twenty-four minutes. It is mellow and relaxing, but early on has some short, surprising breaks from the acoustic guitar where electronic instruments briefly announce themselves, giving the tune a different feel, letting us know this won’t be just one musical theme repeated. The guitar is also backed by a simple drum beat, and there is some nice work on keys throughout the piece. But of course it is the guitar that is the focus, and there are plenty of interesting moments. The song has peaks and valleys, and one of my favorite sections is when it reaches a new plateau approximately six minutes in. It’s so pretty and uplifting. And around ten minutes in, the guitar-playing becomes more forceful, demanding your attention, and I really love that section as well. Then a few minutes later, it returns to that pretty section, but this time has even more power behind it, and it’s quite beautiful.

The longest track is followed by the CD’s shortest track, “Rubies On Fallen Leaves,” which is less than four minutes long, a mere breath in comparison. In fact, the first time I listened to this album, I nearly missed this one. This one feels like one of those perfect moments, when everything slows, and you can take in all the detail, seeing more and more, and nothing outside of it has any bearing on the moment. Where you almost disappear into what it is your seeing and experiencing, and there is a joy in it. And then it’s over, but a part of the moment remains with you, has changed you.

The CD concludes with “Palace Of Broken Mirrors,” a song which gently transports you to a time in the past, with gorgeous themes. This track makes good use of synth strings, and is actually my personal favorite on this disc. It’s also interesting that once the song has grounded us in a point in the past, it then changes, reminding us of the present with certain electric elements, before returning to the earlier theme. And this combination of different vibes works really well to take us out of ourselves and nearly out of time completely. It’s a really interesting and effective composition.

CD Track List
Things I Heard While In The Womb was released on May 1, 2015 on Bohemian Embassy. And as I understand it, an expanded edition of this album has also been released, with four more tracks.
Posted by Michael Doherty at 4:49 PM