The Chocolate Watchband: “I’m Not Like Everybody Else” (2015) CD Review 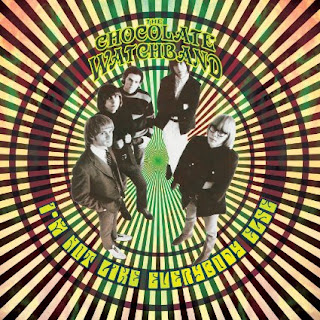 I’ve long been a fan of the late 1960s psychedelic music that was largely coming out of San Francisco. If I had a time machine, that is certainly one of the places and times I would visit. But as I don’t, I have to settle for all the recordings I can get my hands on. One of the bands in the San Francisco area at the time was The Chocolate Watchband, and though I’d seen that band’s name on several of those wonderful psychedelic posters, I actually hadn’t heard their music (apart from what they played in Riot On Sunset Strip). They put out a few records between 1966 and 1970, with lineup changes even within those few years, and then broke up. They then reformed in 1999, and have released a few more albums.

Their newest, I’m Not Like Everybody Else, is actually an interesting look back at some of their early material. It’s not a compilation, however. These are new recordings of some of the band’s best material. You might wonder why such a disc would be necessary. Well, on some of those early recordings, not all of the band members performed. Session musicians played on many of those recordings, even providing some of the vocals, which is crazy. So this is a chance for the band to provide tracks that are more in line with how they performed these songs live. The lineup for the band on these recordings includes David Aguilar, Bill Flores, Gary Andrijasevich and Tim Abbott, all of whom were in the band in the 1960s. Joining them is Alby Cozzette on guitar and backing vocals. What I love is that they really work to recreate the sound and vibes of the late 1960s, and the results are excellent. This album doesn’t have some kind of modern polish on it. This disc includes liner notes by Dave Thompson (and the CD packaging includes photos of four of those great psychedelic posters from back in the day).

The album kicks off with “Expo 2000,” the original recording of which, according to the CD liner notes, featured not a single member of the band. It was included on the band’s first full-length record, No Way Out. This is a cool, kind of trippy instrumental track with a little bit of a surf sound. It’s followed by “Gone And Passes By,” which was also originally included on No Way Out. Written by David Aguilar, this tune has a good Bo Diddley beat and an Indian flavor (Tim Abbott plays sitar), a really interesting combination. Add to this David’s cool work on harmonica, and you have a compelling track.

“Are You Gonna Be There (At The Love-In)” is a totally delicious late 1960s garage gem. It was originally released as a single and also included on No Way Out. In addition to Riot On Sunset Strip, The Chocolate Watchband appeared in the film The Love-Ins, and you can hear this song in the trailer for that film. It was written by Ethon McElroy and Don Bennett. “No Way Out,” written by Ed Cobb (who also wrote The Standells’ “Dirty Water” and Soft Cell’s “Tainted Love”), was the other side of the single, and obviously was the title track to the band’s first album. It’s another great garage tune. Ed Cobb also wrote “Sweet Young Thing” (not to be confused with The Monkees song of the same name), which was released as a single, and “Inner Mystique,” the title track of their second full-length record, a mellow instrumental tune that concludes this CD.

The Chocolate Watchband does an interesting and good rendition of Bob Dylan’s “It’s All Over Now, Baby Blue.” It’s not as beautiful or moving as, say, the Grateful Dead’s version when Jerry Garcia sang it, but it has a great energy, and I absolutely love the addition of flute. In this band’s hands it becomes a bit more of a rock tune, and it works really well. This is a song The Chocolate Watchband included on The Inner Mystique.

Another interesting track, and one of my favorites, is “Ain’t No Miracle Worker,” written by Annette Tucker and Nancie Mantz. There is something seriously catchy about this tune, and I completely love David Aguilar’s vocal performance. This is just a fantastic tune. Here is a taste of the lyrics: “But girl, I just can't offer/No storybook romance/’Cause if that's what you're looking for/We just don't stand a chance.”

I’m a big fan of The Kinks, and the song that gives this CD its title is a Kinks cover. “I’m Not Like Everybody Else” was written by Ray Davies, and was included on The Inner Mystique. The Chocolate Watchband does a really good job with it.

CD Track List
I’m Not Like Everybody Else was released on May 26, 2015 on Purple Pyramid Records, a division of Cleopatra Records.
Posted by Michael Doherty at 2:58 PM