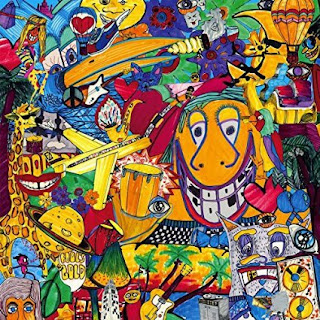 Fool’s Gold is a fun Los Angeles-based pop band made up of Luke Top on lead vocals and bass; Lewis Pesacov on lead guitar; Garret Ray on drums; Brad Caulkins on saxophone, keyboard and guitar; and Salvador Placencia III on percussion. Their new album, Flying Lessons, is their third (following 2011’s Leave No Trace), and features all original music written by Luke Top and Lewis Pesacov. It was originally released on orange vinyl on Record Store Day, as a limited edition, and is now available on CD.

Flying Lessons kicks off with “I’m In Love,” which was the first single released from this album (there is also an interesting animated video for this song). This was the song that got me interested in the band, as I hadn’t heard their earlier CDs. Just a few seconds into this song, with that cool percussion intro, I was hooked, and after listening to the track a few times, I was eager to hear more from them. I’m always a sucker for a good beat that gets me dancing, but this song has a lot more to offer. It has a really nice vibe to it, a joy to its sound without any hint of cheesiness, and some good vocals. And of course I love that percussion section halfway through.

That’s followed by “Lady Of The Lake,” and again it’s the percussion that starts off this song. This one has kind of a 1980s thing to it which I really dig. What I love most about this one is the vocals. And then check out the great bass line to “Break The Cycle.” There’s a nice funky edge to this groovy pop tune, and I particularly like the instrumental section partway through. And then later there is an even better instrumental section, with saxophone over that great rhythm. That’s one of my favorite moments of the album. “You know I won’t give up.”

“Another Sun” is one of the CD’s highlights. It has such a bright, positive feel to it almost from the start that you immediately fall for it, and from there it just gets better. It’s just an all-round damn good song. “Why don’t we try to give it all away/But hold on to us.” And it’s followed by another of my favorites, “Wildflower,” which has a mellow, sweet groove, and is still somehow incredibly catchy. This is another that I loved immediately. “You lost your way, but it’s okay to be alone.”

“Flying Lessons,” the album’s title track, has more positive vibes and a rhythm to get you moving and smiling. “I won’t hold my breath/Standing still can lead to sudden death.” The album then concludes with “Ta’alumah,” which has lyrics in Hebrew.