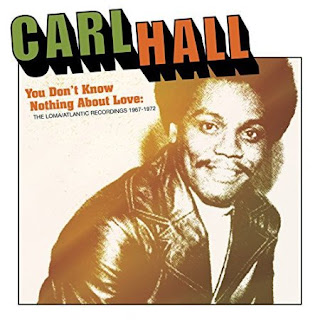 Carl Hall is a singer you might not be all that familiar with, but the new compilation, You Don’t Know Nothing About Love: The Loma/Atlantic Recordings 1967-1972, should change that. He was an incredible soul singer that started in gospel and then switched to more mainstream music, even interpreting some of the popular tunes of the day, including songs by The Beatles and Jefferson Airplane. He released a few singles between 1967 and 1972, none of which reached the charts (which is unbelievable). He later performed on Broadway, and had a brief appearance in the 1979 film version of Hair (in the “Colored Spade” number), and that film appearance was the only thing I knew him from before listening to this CD. Most of these tracks in this collection were previously unreleased, and some include bits of studio banter, including the counting off of songs (and a couple of tracks end abruptly). Carl Hall had such an impressive voice, with power and range and emotion. Several of these songs were written by Jerry Ragovoy, a songwriter that Janis Joplin covered quite a bit, and Hall's voice has a similar energy and force. This collection includes liner notes by Bill Dahl.

“He’ll Never Love You” has a lush, full sound backing Hall’s powerful vocals. This is a song you can sink your teeth into, as Carl Hall does. And it comes across as a fact when he sings, “You know he’s never going to love you like I do.” This is a seriously good track. It’s followed by “It Was You (That I Needed),” a gorgeous, slow number that Carl Hall wrote. Check out his vocals on lines like, “Life was empty, it was meaningless and bare/But you changed all that with your tender loving care/Once I was not the trusting kind/But you’ve completely changed my mind/Oh, it was you that I needed all the time.” And things get even more wild and moving from there. There are moments when the emotion carries him away, and those are some of the song’s best moments (and some of this CD’s best moments). What a wonderful song. There is another take of this song included toward the end of this compilation.

“The Dam Busted” is an energetic and fantastically fun number that was released as a single in 1968. “You were just like a piece of good meat to a starving dog/When I feasted my eyes on you, I knew I had to have it all.” Also included on this CD is another version of the song, recorded in 1971. This is one of the tracks that ends abruptly. The flip side to the 1968 “The Dam Busted” single is “I Don’t Wanna Be (Your Used To Be),” and this is one of my favorite tracks. It’s a song about wanting to get back together with a woman. He sings, “I’m gonna be by your side the way it used to be” and “But look at me begging on my bending knee, baby, please let me get back to you.” How could anyone refuse him after hearing this song? “I Don’t Wanna Be (Your Used To Be)” was written by Jerry Ragovoy, Carl Hall and Van McCoy.

“Sometimes I Do” is a bit of funky fun with a great energy, and is another of my personal favorites from this collection. Carl Hall really belts this one out. I just wish it didn’t have that abrupt ending. His version of “Time Is On My Side,” written by Jerry Ragovoy (under the pen name Norman Meade), begins with a tiny bit of studio banter. This song is best known for the rendition by The Rolling Stones. Carl Hall gives it a different spin. This CD also includes a second version, the second take, which also includes the short, false start of the first take. I love when he repeats “You'll come running back, you'll come running back, you'll come running back, running, running to me.”

Carl Hall does an interesting rendition of The Beatles’ “The Long And Winding Road.” Listen to the way he holds onto the word “long” toward the end of the track. And the last section of the song is entirely his own, and is wonderful. And his version of Jefferson Airplane’s “Somebody To Love,” here titled “Need Somebody To Love,” is also quite different from the original. It sometimes has the feel of a big production number, which takes a bit of getting used to. But it has a funky base and some excellent vocals, and I ended up digging it.

CD Track List
You Don’t Know Nothing About Love: The Loma/Atlantic Recordings 1967-1972 is scheduled to be released on June 23, 2015 through Omnivore Recordings.
Posted by Michael Doherty at 3:24 PM