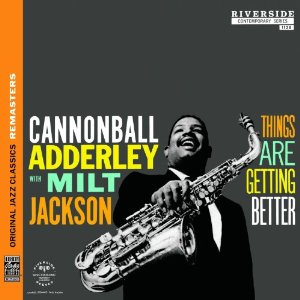 Concord Music Group, as part of its Original Jazz Classics Remasters series, is re-issuing Things Are Getting Better from Cannonball Adderley with Milt Jackson. This album, recorded on October 28, 1958, also features Wynton Kelly on piano, Percy Heath on bass, and Art Blakey on drums. Yeah, it’s a pretty amazing group of musicians. Milt Jackson is of course known for his work in Modern Jazz Quartet.

This re-issue includes three bonus tracks that were not on the original LP, including a short track of banter in the recording studio. The re-issue also features new liner notes by Willard Jenkins, as well as the original liner notes by Orrin Keepnews. The album was remastered by Joe Tarantino.

Things Are Getting Better opens with a Milt Jackson composition, “Blues Oriental,” which features a really cool intro with an oriental feel, before Jackson takes the lead on vibes. This tune has a great blues base, and from there Adderley blows freely, loosely, beautifully. Wynton Kelly also provides some really cool work on piano, and I particularly like the way he and Milt Jackson work together toward the end of the track.

“A Few Words” is some banter during the recording process. Cannonball says, “I don’t know how long it will be because that’s not important.” Pretty cool. This was not included on the original album.

“Things Are Getting Better,” the title track, is a composition by Adderley and D. Veronica Langdon. It’s a catchy tune, with a kind of sweet, positive sound, due in large part to Milt Jackson’s work on vibes setting the tone at the beginning. And then Adderley’s playing is particularly impressive. This track was (deservedly) included on The Very Best Of Cannonball Adderley, released last year by Concord Music Group.

“Serves Me Right” is a sexy, late-night tune written by Buddy Johnson. Art Blakey keeps the brushes active on the snare while Percy Heath gives a simple, but great groove on bass. Cannonball’s lead section is truly beautiful at times. This is the fifth take. The CD also includes the fourth take, which is slightly shorter, but just as cool.

The album includes a fun rendition of Dizzy Gillespie’s “Groovin’ High” with that call and response, and some fantastic work by Cannonball over a great groove by Percy Heath on bass.

This CD contains two takes of “The Sidewalks Of New York,” written by Charles B. Lawlor and James W. Blake. The first take features some spirited playing by Milt Jackson, and some interesting stuff by Art Blakey on drums. There is also a sweet lead by Wynton Kelly on piano. The bonus take, take #4, is significantly shorter. Is it just me, or does Percy Heath seem more prominent in the mix on this take?

“Sounds For Sid,” the Cannonball Adderley composition, opens with some solo blowing by Cannonball. And then Milt Jackson takes the lead over a kind of slow, persistent groove. And then Cannonball takes over. When he finishes his lead, Wynton Kelly’s lead on piano so naturally emerges, at first simply continuing what he was playing under Adderley’s lead, and then taking it from there. This is a really cool track, and is one of my personal favorites.

The original album ends with a nice, fast rendition of Cole Porter’s “Just One Of Those Things.” I just love what Cannonball does on this one. And Art Blakey gets a bit loose on the drums at times, adding some delicious rolls. And check out Wynton Kelly’s lead on piano.

Things Are Getting Better was released on July 23, 2013 through Concord Music Group. Also released on that date were Bill Evans Trio: How My Heart Sings!, Chet Baker: Plays The Best Of Lerner And Loewe, Thelonious Monk/Gerry Mulligan: MulliganMeets Monk, and Wes Montgomery: So Much Guitar!

Also released in this series was Know What I Mean? by Cannonball Adderley with Bill Evans (which also features Percy Heath on bass).