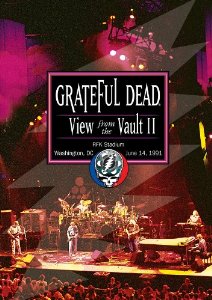 Every summer, thousands of people would pack themselves into their cars, vans, buses, trucks or anything else that had at least a couple of wheels, and hop on the Grateful Dead tour. The venues were fairly large toward the end, so screens were needed so that folks in the back could see the band. And now because of that, we get to experience those shows again (or for the first time). View From The Vault II has the entire concert the Grateful Dead performed at RFK Stadium in Washington, D.C. on June 14, 1991 (plus some bonus material).

The summer of 1991 was during that time when Bruce Hornsby was a member of the band, and he plays accordion on the opening tune, “Cold Rain And Snow.” Vince Welnick, the keyboardist for The Tubes, had taken over the hot seat after Brent Mydland’s death the previous summer. It’s a good, energetic rendition of “Cold Rain And Snow,” and then Bob Weir goes into “Wang Dang Doodle,” for which Bruce sits at the piano. I love the shot of Bruce when he recognizes the opening notes of “Jack-A-Roe.” This is a good version of “Jack-A-Roe,” though with a sloppy ending. After it, there is some joking around between Jerry Garcia and Mickey Hart, and also some exchange between Bruce and Bob. Man, I really wish the microphones had picked all that up. And then Billy Kreutzmann is goofing around too. Clearly the band is in a great mood. And they launch into “Big River,” featuring some really nice stuff by Bruce on piano, and then straight into “Maggie’s Farm.” Everyone takes a verse, including Bruce. This version has a tremendous amount of energy, and it’s always fun when Phil Lesh takes a verse.

Check out Bob’s surprised reaction to an off note near the beginning of “Black-Throated Wind.” It’s pretty funny. The first set also features a great “Tennessee Jed” – “Drink all day, gonna rock all night.” They close the first set with “The Music Never Stopped,” with a nice long jam at the end.

They kick off the second set with “Help On The Way” > “ Slipknot!” > “Franklin’s Tower,” and you can hear the audience go wild at those first notes. “Without love in the dream it will never come true.” During “Slipknot!” we begin to get computer graphics, the first being a heart. The moment that “Slipknot!” becomes “Franklin’s Tower” always fills me with joy. Man, it looks like Mickey is sweating from his eyes.

Bob then goes into the wonderful “Estimated Prophet,” and this is a great version, with Bob really getting into it, and Vince doing some interesting stuff on keys toward the end. As the song drifts off, Jerry gives a couple of hints of what is to come, and then, yes, the band goes into “Dark Star.” It’s always special when the band plays this song. (It was at that same venue a year earlier that I saw my first “Dark Star,” and that’s also included as bonus material on this disc.) “Dark Star” was always about exploration, and the band certainly goes off into some interesting territory in this version, leading into “Drums/Space.”

Jerry gently leads us out of “Space” with those first few notes of the beautiful “Stella Blue.” “It seems like all this life was just a dream.” Oh man, this is a sweet version, especially as Jerry repeats, “Stella Blue.” And they allow it to end before easing into “Turn On Your Lovelight” (with Bruce using his right foot on the piano at the end of that one). The encore is “It’s All Over Now, Baby Blue,” with Bruce Hornsby playing accordion.

I wasn’t at this show in D.C., but I did make it to the next two shows on that tour – June 16 and 17 in New Jersey. The June 16 show was the worst show I saw the band do. But June 17 was one of the best concerts I ever attended, and I’m fervently hoping they will release that show on DVD at some point.

Like I said, I saw my first “Dark Star” in D.C. in the summer of 1990. This disc includes the first half of the second set from that show (July 12, 1990), which begins with “Take A Step Back.” I remember that. I was on the floor for this show, about a quarter of the way back. The set then truly begins with Phil singing “Box Of Rain,” a nice version too. Then Bob sings “Victim Or The Crime” (I never really cared much for that song), and Jerry does “Foolish Heart.” And then, oh yes, “Dark Star.”  And the crowd goes nuts. I went nuts. It starts so perfectly, no hints to spoil the surprise, the whole band right on it. And it’s a great version. I mean, sure, Jerry’s vocals are a bit rough, but it’s fantastic nonetheless, going off into lots of cool areas, without ever getting messy. And it’s like twenty-four minutes long. This “Dark Star” was one of the highlights of that tour for me, and it’s a total pleasure to enjoy it again. That goes into “Drums,” which we hear some of during the DVD’s closing credits.

The DVD also includes a music video for “Liberty,” which, by the way, was the last song I ever saw the Grateful Dead perform (in May of 1995). The video is mostly footage of the band performing the song, but also features some old photographs and footage. It’s pretty cool.

Posted by Michael Doherty at 1:38 PM