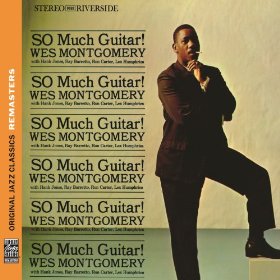 Concord Music Group, as part of its Original Jazz Classics Remasters series, is re-issuing Wes Montgomery’s So Much Guitar! Wes Montgomery is an amazing jazz guitarist, and this record includes a couple of his original compositions. This CD actually has two complete records. While listed as “bonus tracks,” tracks 9 through 16 actually make up the album titled The Montgomery Brothers In Canada. These tracks were recorded in April of 1961, a few months before the tracks that compose So Much Guitar!

So Much Guitar! opens with an original tune by Wes Montgomery, titled “Twisted Blues.” This song has a cool bluesy vibe, and it’s not long before Wes’ guitar is off and running, with Ron Carter’s bass doing likewise beneath him. The song takes some surprising twists, like this playful moment on guitar around the 2:09 mark, which I love. While this track is really about Wes and Ron, there is a really cool lead section on piano by Hank Jones.

Wes Montgomery does a wild take on Duke Ellington’s “Cotton Tail.” The pace is fast, the playing is inspired. And when Wes takes a break, Hank Jones takes over, leaving no gap, with the bass still rolling below them. There are short stops where Lex Humphries solos on drums, and Ray Barretto does a short solo on congas. Oddly, it is the drum solos that momentarily slow things a bit.

It’s not all manic, of course, Wes slows things down quite a bit for “I Wish I Knew,” which ends with some really sweet work on guitar. This album also includes a sweet take on “While We’re Young,” presented as a guitar solo. And the album’s closing track, “One For My Baby (And One More For The Road),” is a slow, late-night gem, featuring some great work by Hank Jones on piano.

“I’m Just A Lucky So And So,” written by Mack David and Duke Ellington, is always so fun, and I love Wes Montgomery’s take on it. It’s so smooth, so cool, so groovy. I’m also rather fond of Hank’s lead section on piano. But it’s that main section that really makes me love this one. This track is one of the highlights for me. It was also included on The Very Best Of Wes Montgomery, released last year by Concord Music Group.

The album’s other original Wes Montgomery composition, “Something Like Bags,” has a very cool groove and vibe. Interestingly, it’s almost right away that Hank takes the lead spot on piano, playing over this great rhythm by Ron Carter and Lex Humphries. And I’m really into the short section where Carter has a moment in the lead spot. This tune is just so cool, and is another of the highlights.

The bonus tracks have a different feel, due especially to the presence of Buddy Montgomery on vibraphone. These tracks were recorded at The Cellar, in Vancouver, British Columbia, late at night after the audience had left. It’s insane to think that this group finished playing a show, and then recorded this album. It’s wild, especially considering the energy on some of these tracks, like the opening “Jeannine” and the Charlie Parker cover, “Barbados.”

Of course, there are some mellow, late-night tunes like “Angel Eyes,” which begins as a solo by Wes on guitar. The bass and drums then keep a very simple, insistent and effective rhythm beneath Wes’ guitar. And “You Don’t Know What Love Is,” which – though it is really Buddy’s track – features some nice, subtle stuff by Wes.

This CD ends with “Beaux Arts,” an original composition by Buddy Montgomery, and one of my favorites.

So Much Guitar! is scheduled to be released on July 23, 2013 through Concord Music Group. Also being released on that date are Bill Evans Trio: How My Heart Sings!, Chet Baker: Plays The Best Of Lerner And Loewe, Cannonball Adderly with Milt Jackson: Things Are Getting Better, and Thelonious Monk & Gerry Mulligan: Mulligan Meets Monk.

Posted by Michael Doherty at 1:44 PM