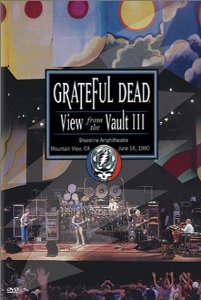 The Shoreline Amphitheatre in Mountain View, California was basically built for the Grateful Dead. I saw a bunch of shows at this venue. This is where I saw a “Stella Blue” so beautiful that I found myself crying. I looked around, saw that everyone else was crying too. It was the kind of venue where the magic happened often. It was set up with a general admission lawn at the back, and that’s where I was for most of the shows there. But back in 1990, I hadn’t yet made it to Shoreline. I was still on the east coast.

View From The Vault III has the complete show that the Grateful Dead did at Shoreline on June 16, 1990. They open with a sweet rendition of “Let The Good Times Roll,” a song I was always happy to see them do. It’s a great opener for obvious reasons, with lines like “We’re going to stay here ‘til we soothe our souls, if it takes all night long.” And Brent Mydland takes a verse, which is great. The vocal section at the end is really good. Just a great way to kick off a show.

And then, holy moly, they go into “Truckin’.” Yes, a first set “Truckin’.” No messing around, just getting right down to it, and immediately into a good jam. It must have been something to be at this show, but it’s great to be able to watch it now. It’s such a different way to experience the band, seeing the close-ups of Jerry’s guitar, being able to really see Bill Kreutzmann and Mickey Hart behind their kits. And to see Jerry smile at the end of “Truckin’” just before he takes the band into “Touch Of Grey.” Perfect. It’s a good version of “Touch Of Grey,” and things stay loose and fun, with Bob Weir going into “Mama Tried” and then straight on into “Big River,” with some nice stuff by Brent on keys.

There’s a nice shot of Bill as the band eases into a seriously beautiful and wonderful rendition of “Friend Of The Devil,” their vocals sound especially good. And this song has more excellent stuff from Brent, and then a great lead part by Jerry on guitar. This is one of the show’s highlights, and it’s followed by one of my personal favorite songs, “Cassidy.” It’s during this song that we get the first changes to the visuals – during the jam section. This is a really strong rendition of “Cassidy,” by the way. And then Jerry sings “Big Boss Man” (a song Pigpen sang in the early years). If it’s Saturday, you know at some point in the show you’re going to hear “One More Saturday Night.” At this show they end the first set with it.

The band kicks off the second set with “China Cat Sunflower,” featuring a really great jam, which then slides into “I Know You Rider.” Oh man, listen to Jerry on the “northbound train” verse. And then Brent gives us “We Can Run,” one of the best tunes from the band’s final studio release, Built To Last. I love when Brent does that vocal part at the end, while the rest of the guys sing the chorus. Just wonderful. And then Bob goes into the always-great “Estimated Prophet.” And this is a very cool version, with Bob playing with the reverb on his vocals toward the end, and with some nice exploration during the jam, and some visuals to go along with it.

And when the jam gets far enough out there, Jerry gathers it in with the opening notes of “Terrapin Station.” At times there was nothing that could make me happier than hearing those first notes of “Terrapin.” It’s like you know things are all right. “Terrapin” is a journey I always want to go on. This version gets weird toward the end, sort of devolving around thirteen minutes in, and then going into a different jam. The jam finds a really cool groove around ten minutes in, like a new song in the making.

Then, holy moly, the track list on the back of the DVD is not in error – “Space” actually comes before “Drums.” Yes, the jam leads to “Space,” which must have freaked out the audience. Well, some of them, you know. So “Drums” begins differently than it usually does, coming out of “Space.” It sort of begins in a way that it often ends, and is actually incredibly short, just a few minutes. Very weird. And then everybody is back, going into “China Doll.” The set ends with “Sugar Magnolia.” There’s a great shot of Phil smiling at the end. The encore is “It’s All Over Now, Baby Blue.”

The DVD contains, as bonus material, a portion of the concert the Grateful Dead did at Shoreline on October 3, 1987, beginning with “Hey Pocky Way.” And man, Brent is cooking on this one. The band does a good version of “New Minglewood Blues” and a nice “Candyman.” Before going into Dylan’s “When I Paint My Masterpiece,” the band jokes with a bit of the theme from The Adams Family.  This is a seriously energetic rendition of “Masterpiece.” Jerry’s vocal microphone cuts out for a moment during an otherwise cool “West L.A. Fadeaway.” Bob follows that up with “My Brother Esau,” the last time the band ever played this song.