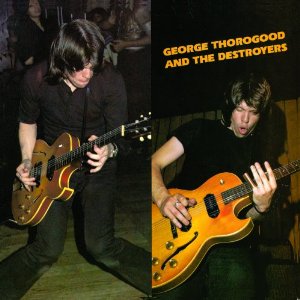 George Thorogood And The Destroyers covered a lot of traditional and classic blues numbers. But when I was a kid, it was these Thorogood versions that often served as my introductions to these songs. So these recordings definitely have a special place in my own personal music history. And I think it’s the same for a lot of folks. Plus, Thorogood and the rest of the band have so much damn fun with these tunes. It’s not just blues, of course, but rock and roll and even folk. And there are a couple of original tunes as well on this self-titled debut album, which is now being re-issued by Rounder Records.

I always dug George Thorogood’s voice. There is something really tough about it – a voice with an attitude, a voice that will drink your liquor and run off with your girl, but also a voice that if caught will replace your booze and introduce you to his sister.

They kick off the album with “You Got To Lose,” a good, straight-forward bluesy rock number written by Earl Hooker. It starts, “You got to lose/You can’t win all the time.” So true. This song is addressed to a woman, and he promises her he’ll be back on his feet soon. As you’d expect, this track features some cool work on guitar, particularly at the end.

That’s followed by “Madison Blues,” a catchy number written by Elmore James. This is about the groove, however, not the lyrics. It has a false ending. George Thorogood And The Destroyers also cover Elmore James’ “Can’t Stop Lovin’” on this album.

“One Bourbon, One Scotch, One Beer” is the big one, of course. George Thorogood begins it by saying, “I want to tell you a story,” and indeed he does. It’s the story of a man who loses his job and can’t pay the rent, and has to keep stalling, putting off the landlady. He delivers the story in a spoken word style, over a steady, fast simple rhythm. There is a short section where he asks a friend if he can stay with him, but his friend’s wife won’t let him. That part always makes me laugh. He says, “He said, I don’t know, man, she’s kinda funny and all. I said, I know, everybody funny. Now you funny too.” He takes off with his stuff since he can’t pay the rent. So of course he stops in a bar – and three and a half minutes in, when the bartender asks him what he wants, the song really starts, and it’s just great. This is one seriously fun track, with some cool, kind of humorous work on guitar, especially near the end. It’s like the guitar has taken over telling the story. The track is eight and a half minutes, and yet somehow ends too soon.

George Thorogood follows that with a very cool acoustic version of Robert Johnson’s “Kind Hearted Woman.” This is real blues, vocals and guitar, and it’s excellent. He also does a really wonderful acoustic version of “John Hardy,” complete with harmonica, showing he can do folk too. It’s interesting, because these aren’t the tracks we usually think of when we think of George Thorogood, but these are among the best on the album.

I’ve always been a big fan of that great Bo Diddley beat, and on this album George Thorogood And The Destroyers cover Bo Diddley's “Ride On Josephine.” This is a cool track, with a nice jam section.

George Thorogood wrote two of the songs on this album. The first of the two originals is “Homesick Blues,” in which Thorogood sings, “My guitar is my partner and the highway is my friend.” This track has a bit of an early rock and roll thing going on, as well as being steeped in the blues. The second George Thorogood original is “Delaware Slide,” and this is a tremendous tune, a great dish of blues rock. He explains himself in the line, “Well, I grew up with the rock and roll, but these blues wouldn’t leave me alone.” He plays around with several themes in the guitar lead section in the second half of the song.

The band is George Thorogood on vocals, electric guitar, acoustic guitar and harmonica; Jeff Simon on drums; and Billy Blough on bass. Ron Smith plays guitar on some tracks.

George Thorogood And The Destroyers is scheduled to be released on July 30, 2013 through Rounder Records. Also scheduled for release that day is the band’s second album, Move It On Over.

Posted by Michael Doherty at 1:36 PM