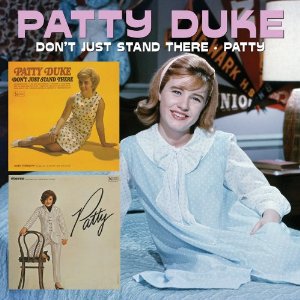 Patty Duke received an Oscar when she was still a teenager. This led to her own television program, The Patty Duke Show, which led naturally to a recording career. Why not? Now Real Gone Music has reissued her first two albums (Don’t Just Stand There and Patty) on a single CD. Surprisingly, these have been unavailable on CD until now. There are also two bonus tracks from Billie, positioned between the two albums on this release, so that the songs are in chronological order.

Don’t Just Stand There was released in 1965. Her vocals on the title track are strongly reminiscent of Lesley Gore. This also has one of those dramatic spoken word sections so popular for a time, and is actually a pretty cool song. “Don’t Just Stand There” was also released as a single, and reached #8 in 1965.

Her vocals sound even sweeter on the second track, “Why Don’t They Understand.” And on her cover of “Downtown,” her vocal approach has something of the theatrical in it. She makes it feel it was written for a stage production. I really like her approach, for it adds something to this familiar song.

She also does a cover of “Danke Schoen,” a song I’ll always associate with Ferris Bueller’s Day Off. We’re all used to Wayne Newton’s version. Of course, Patty changes the line to “how I tore my dress.”

In “Everything But Love,” she sings, “The girls all call me lucky because I have my own sports car/My house is very fancy just like some movie star,” and then “I have everything most girls dream of/Everything, yes I have everything but love.” Oh, the woes of a spoiled rich girl. You kind of want to smack her around during this track.

She covers “A World Without Love,” a Lennon/McCartney composition that was a hit for Peter And Gordon. Her version is okay, but not great. Much better is “Too Young,” which opens with the lines, “They try to tell us we’re too young/Too young to really be in love.” Ah, remember those teenage troubles? Patty Duke totally sells it, and this is one of the stronger tracks. I really like her vocal performance on this one. “Too Young” was written by Sylvia Dee and Sidney Lippman.

Another highlight is her take on “Save Your Heart For Me.” Her rendition comes across as heartfelt yet fun, and is delightful.

The last track of Don’t Just Stand There is “The End Of The World.” I can’t help it – I’ve always had a thing for this song, and Patty Duke does an excellent job with it. Written by Sylvia Dee and Arthur Kent, it was a hit for Skeeter Davis. This is one of my favorite tracks. She does one of those sort of whispered spoken word sections (“I wake up in the morning, and I wonder why everything’s the same as it was/I can’t understand, no I can’t understand how way life goes on the way it does”). I would have loved to hear a duet with her and Davy Jones.

The two bonus tracks are from the film Billie. The first, “Funny Little Butterflies,” was released as the flipside to “Say Something Funny.” As for the second song, with the title “Lonely Little In Between” and the line “I should have been a boy, but here I am a girl,” I really want to see it covered by a drag queen. Who can fulfill this wish for me? Please contact me.

The second album, Patty, which was originally released in 1966, opens with an original tune (though not written by Patty Duke), “The World Is Watching Us.” It’s an interesting and kind of wonderful tune, and was also released as a single. At the beginning of this one, Patty sings, “Seems like the whole wide world is watching us/Watching us/Waiting for things to go wrong.” I think this is one of the strongest tracks from the second album. (Interestingly, “Say Something Funny” opens with the line “Everyone is watching us.”)

“Yesterday” is one of the most covered songs in the history of pop music, and Patty Duke gives us her rendition on her second album, and it’s pretty good. She also covers “All I Have To Do Is Dream,” a hit for The Everly Brothers.

Posted by Michael Doherty at 1:00 PM