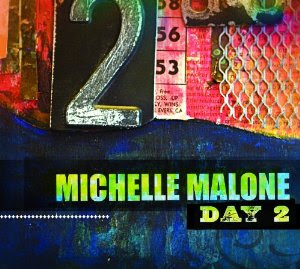 The first time I popped in Michelle Malone’s latest CD, Day 2, she reminded me of Marlee MacLeod, a kick-ass girl with attitude and great vocal chops. This CD’s first track jumps right on top of you. And then later “The Auditor” is a rock song in which she sings, “A government by the rich for the rich don’t include me” (I love her work on harmonica on that tune). Michelle Malone can also do softer, heartfelt, emotional songs (check out “Marlboro Man”).  And she gives a fun bluesy vibe to a song like “Chicken Lickin’ Boogie,” a kind of silly song featuring some great stuff by Chuck Leavell on piano. That song also has a reference to Tina Turner (“I’ll be your private dancer, if you’ll be my dancing pole”).

“But I’m not like the other girls,” Michelle Malone sings on the album’s opening track, just before the song kicks in. No kidding! And then – bang – the song becomes a great loud rock tune. She and the band go all out on this one, and it’s some serious boisterous fun. And at one point it breaks down to drums and vocals. Remember in the 1980s when all songs were required by law to do that? Ah, so much fun. And I dig that piano work by Chuck Leavell. Phil Skipper plays bass on this track.

Michelle brings it down a bit for “Day 2,” the CD’s title track. Her vocals become sweeter. She sings, “I’m screaming inside,” which is followed by a pause, and I wonder if this one will suddenly become a rock song. But then she sings, “But I’m not going to break,” and the song remains a sweet, softer song. I really like these lines: “When there’s nothing left to hold on to/You’ve got to break down to break through.” Randall Bramblett is on Wurlitzer.

I dig “Immigration Game” right from the start. I like that the cool groove is established before the vocals come in. Then Michelle starts by setting up an interesting scene: “Jesus sitting in Alabama waitin’ on a train.” Then the song takes on more energy, even with hand claps. It’s kind of a playful tune, with Jesus as “a victim of the immigration game.” And it features some really nice work on guitar by Michelle Malone. This song, like the opening track, breaks down to percussion and vocals. By the way, Shawn Mullins provides some good backing vocals on this track.

“Marlboro Man” has the heartbreaking line, “Daddy talks more to me now than when he was alive.” The second time she sings it, she follows the line with some work on harmonica, one of those instruments that can express sadness and longing so eloquently (I actually want a bit more of it in this song). Randall Bramblett is on Wurlitzer, and Marty Kearns plays B3 on this track.

“Wasted On You” is more kick-ass country rock about “chasing dreams that never come true.” She sings, “I don’t have too many regrets about my misspent youth/Except the money and the time and the dreams that I wasted on you.” Besides her excellent vocals, Michelle provides some wonderful work on guitar.

“St. Peter” is a softer, sadder tune with her mother saying, “I don’t think that he’ll see the spring” about her father. The immediate repetition of the line stresses its seriousness and inevitability. Two other lines are repeated that way over the course of the song. The first expresses that sense of helplessness: “All we can do now is pray.” The other is a heartbreaking line: “I wish I could to this day” (after she sings, “I never got to tell him goodbye or how I loved him”). This is a really strong track, featuring Randall Bramblett on B3 and Shawn Mullins on backing vocals.

The song “100 Paths” has a candid, playful vibe. These are the lines that made me love this song: “There are about a hundred jobs that I could do/If someone would just pay me not to do this thing I do/It’s the only job that I have ever had/I don’t count waitressing/I was the worst waitress in the world” (even, though, let’s face it, “waitress” should never be used as a verb). There is a bit of a laugh in her voice when she sings, “I don’t count waitressing.” Shawn Mullins and Trish Land provide backing vocals on this track.

Day 2 concludes with “Shine,” a prettier, softer song with just vocals, guitar and bass. Here is a taste of the lyrics: “You’re the sunlight on my skin/Clapping leaves, ovation wind/You are the song that makes me want to sing.” Her vocals just get more and more gorgeous, more and more powerful as the song goes on.
CD Track List

Posted by Michael Doherty at 3:31 PM