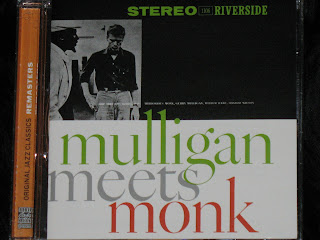 Concord Music Group, as part of its Original Jazz Classics Remasters series, is re-issuing Mulligan Meets Monk, the only record by Thelonious Monk and Gerry Mulligan. The album features mostly Monk’s material, with one Mulligan composition, and one cover. These tracks were recorded in two days in August of 1957, and feature Wilbur Ware on bass and Shadow Wilson on drums. This re-issue includes four bonus tracks, being different takes of some of the original album’s material.  The album was re-mastered by Joe Tarantino, and the re-issue features new liner notes by Neil Tesser, as well as the original liner notes by Orrin Keepnews.

They kick off this album with Monk’s famous “’Round Midnight,” which begins with some interesting stuff by Thelonious Monk on piano, before getting to that smooth, cool, moody lead by Gerry Mulligan on baritone saxophone. It’s a truly interesting combination, with Monk providing little punches below Mulligan’s sax. And toward the end Monk takes a lead spot, which is great. I love the moment when Mulligan eases back in, on some sweet, sustained notes. It’s a really good rendition of this classic composition.

Things get more wild with “Rhythm-A-Ning,” another Monk original, which Mulligan jumps right into and where he seems right at home. Monk does really interesting, fun stuff in his lead section. But the section where they both add short exclamations over that great rhythm by Wilbur Ware on bass and Shadow Wilson on drums is my favorite part of the track.

“Sweet And Lovely” is the album’s one cover, a song written by Jules Lemare, Gus Arnheim and Harry Tobias. I love the way Mulligan holds onto those low notes during Monk’s lead section. It’s subtle, but kind of beautiful. And his later lead section is just as the title promises, sweet and lovely.

“Decidedly” is the only Gerry Mulligan composition on this disc. It’s a fun tune, with these really cool moments of Mulligan blowing over just a few hits on the drums by Shadow Wilson. There are moments where Mulligan’s playing feels a bit like early rock and roll. And I love what Monk does over that cool groove. There is even a nice lead on bass by Ware over a steady beat on the hi-hat. And there is a short drum solo. The bonus tracks include a different take of this tune. For some reason, this other take strikes me as humorous at moments, in a delightful way. And the bass lead is more of a solo, without the constant hi-hat keeping time.

“Straight, No Chaser” is another Monk original composition. This is the tune that kicked off the recording sessions, and the bonus tracks include the first take. I love Mulligan’s lead section in the take used on the album. There is something cool, almost sly, about certain moments of it. And then he really just lets go, clearly having fun. The bass lead is interesting, beginning somewhat tentatively, quietly. And I love Monk’s lead. The first take is quite a bit shorter.

The album concludes with “I Mean You,” written by Monk and Coleman Hawkins. This song has a good groove, and some excellent work by Monk on piano. It’s the fourth take that was used. This re-issue also includes the first two takes as bonus tracks.

Mulligan Meets Monk was released on July 23, 2013 through Concord Music Group. Also released on that date were Bill Evans Trio: How MyHeart Sings!, Chet Baker: Plays The Best Of Lerner And Loewe, Cannonball Adderly with Milt Jackson: Things Are Getting Better, and Wes Montgomery: So Much Guitar!

Previously released in this series were Monk’s Music, Thelonious Alone In San Francisco and Misterioso.