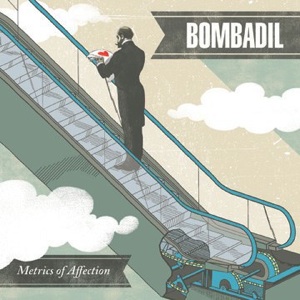 Sure, Peter Jackson cut Tom Bombadil out of his film version of The Lord Of The Rings. Nevertheless, he’s a favorite character of many people, and the one Bombadil named themselves after. Bombadil’s new album, Metrics Of Affection, is wonderful, with an unusual sound and a great sense of play and some excellent lyrics.

They win us over immediately with catchy pop and then, interestingly, once they know they’ve got us they take us on a rather surprising journey. I mean, check out the beautiful piano on “Patience Is Expensive.” And there are some strange folk songs, like “When We Are Both Cats,” a playful folk tune with some pop sensibilities. Once they know we’re paying attention, they’re not afraid to try all sorts of things. All of the songs are originals, and this is a band that can write some damn good songs. In fact, this album’s final track is one of my favorite songs of the year.

There is something immediately loveable about the opening track, “Angeline,” and about this band. It’s tough to be truly original, while still creating catchy pop tunes, and this band manages to do just that, particularly with this track. I love the vocals (and the backing vocals really add something to this song). The song begins, “Take another left Angeline/Can't you see the light's turned green/And you are lost in the city.”

“Learning To Let Go” begins almost like a catchy children’s song. Seriously, it will have you smiling immediately. And when it kicks in, it has something of a mid-1960s pop vibe, which I totally dig. “I don't feel that lucky/Even with my girl/Even if she loves me/There is so much in this world/I'm learning to let go.” The song then returns to this delightful part on piano. I can’t even begin to tell you how much I love this song. Just listen to it yourself. You’ll understand.

“Born At Five” is a wonderful pop sketch of a life. It begins a cappella, describing a character, and continues a cappella until he’s in his teen years – “and at thirteen kissed a girl but she didn't kiss back.” Then things go well, “Until he cheated death at 35/Asleep at the wheel, swerved just in time/His heart grew cold and he lost touch/The job was boring and the marriage was tough.” It has a strangely happy sound, especially with some serious lyrics. Certain lines caught me, making me feel odd for smiling, you know? Like “But a stroke got dad and they buried mom/Once the cancer grew too strong/A lullaby from sister's lungs/First tear in dad's eye since the birth of his son.” But the song’s rather happy feel helps give you the impression that this is life for everyone, and that it’s not so bad. That your life is not so bad. After all, they sing, “There was nothing too special about the way he lived life/He was about average build, and about average height/Sometimes he did things wrong and other times did things right.”

“Isn’t It Funny” begins a cappella too. This one shows that these guys can really sing. It also has a spoken word section.

The vocals are also impressive in “Boring Country Song.” There is a beauty to this song, though there is also something rather playful about it, in lines like, “I never took a lesson in my life/Not confessing to you that you were right/’Cause you don't listen to country.” I am a huge Shakespeare fan, and this song has a reference to King Lear in the lines, “Just another plot goes on and on/Just another love with too much history/What about King Lear/Doesn't drive you crazy.”

“Have Me” is such a strange and lovely song. It has odd lines like, “You can’t put everyone you loved into a single car/You can only go so far/But you can have me.” I love the combination of funny lines with that certain sweetness. These guys really make it work, finding the right balance – or, rather, creating it. And check out this line: “But now I know I was the fool for starting every single sentence in my head with "we.’” Wow. That’s kind of surprising in its being so heartbreaking. This is a favorite of mine.

Another favorite and another surprise is “Patience Is Expensive,” an instrumental track with truly gorgeous work on piano. “What Does It Mean” is yet another surprise, mainly in the way it is approached (or attacked) vocally, particularly on the line “But maybe I act differently from how you expected me to be.” I am totally into it. There is something almost theatrical about this song.

Metrics Of Affection concludes with “Thank You” which begins with some pretty work on piano. Then the vocals come in, and they’re delivered in a quiet, intimate way, like a friend speaking sincerely, offering advice and wisdom without pretense or agenda. Check out these lines: “Forget about the ones who let you down but remember to stay gracious for the ones who stuck around” and “And take everyone you love, and write them down/You might not want to tell all of them, because that could weird some people out/But let them know you care, somehow.” Again, they manage to be funny and completely sincere simultaneously. Seriously, this song is beautiful. It really got to me the first time I listened to this album, and its effectiveness has not lessened one bit after many, many times through. I love it even more.

Metrics Of Affection is scheduled to be released on July 23, 2013 on Ramseur Records.
Posted by Michael Doherty at 12:19 PM