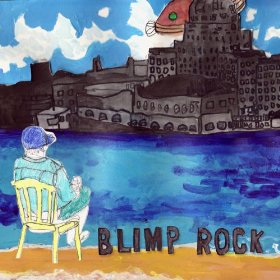 Blimp Rock is the self-titled debut album of a strange and delightful Canadian band that at times reminds me of The Halo Benders and Lou Reed, particularly in the vocals. These songs show a playful attitude, with a voice is that is wryly serious. All tracks are originals, featuring a different, distinct take on the world, with some unusual subjects, sort of in the way that Jonathan Richman sings of unlikely things. In fact, one track in particular, “If My Friends Ran The Government,” reminds me a bit of Jonathan Richman - the style of it. A sort of punk folk attitude. I dig this band’s fun, quirky lyrics, and appreciate that while they sing of unusual things, they never get too silly. You know? The lyrics are never stupid. Several of these songs mention Toronto, a city I want to revisit at some point.

With the CD’s opening track, “Blimp Rock Live,” the band almost lands on that list of bands that have a song whose title is their name. It’s close. On this track, they sing, “That blimps are a bad idea/You’re going to blow up everyone you love/Blimps are the safe way to go/When I take us up with helium.” And then “Blimp rock is going live by the lake tonight.” It’s an interesting way to open their debut album, a strange announcement of the band’s presence and its intentions. On the back of the CD there is a note: “All proceeds go towards Blimp Rock Live, the world’s first airborne rock festival.”  And yes, the band hopes to raise money to purchase a blimp to house a music festival over Lake Ontario. Why not? If they do it, I hope I can get a ticket. The song has a simple, easy groove. “Dance if you like/If not, there’s board games.”

Obviously the band has a certain sense of humor about itself. The first lines of “In General” are “I would like to say for the record that I don’t think it’s much use to generalize, except for kittens and certain extremist groups.” This is a song about the hazards of stereotypes and generalizations. He gives himself as an example, in the line, “I don’t like hockey, unless it is on the street.” There is a section with short rolls on toms that reminds me of The Who. “People can sing on tracks.” “In General” was written by Peter Demakos and Martina Schaefer.

Route 401 is a road that goes from Windsor to the Quebec border, passing through Toronto. In “401” Blimp Rock describes it thus: “I can hear you can ride it right to the end of the world.” This song has the vocals prominently in the mix, with some quiet work on guitar beneath.  Sparse bass comes in later. Like I said, this band writes some truly original material. I’m having trouble thinking of another song that mentions driving lessons. In “401,” he sings that his driving teacher “said I needed more lessons when on the last one I drove past an exit, right past an exit.” Then three minutes in, the song suddenly kicks in.

“The Love That Treats You Right” opens with the phrase, “Let’s be honest.” It’s an odd, quirky, delightful song with some wonderful lyrics, like “I treated love like it was a paper towel and I had chocolate on my face.” And for some reason every time I listen to this song, there is one line that always makes me laugh: “I don’t think you listen or like me that much, but I miss your cute sweater jackets.” This song is kind of silly, but it also has an undeniable sweetness to it. This is one of my favorite tracks.

“First Date On A Full Moon” is a love song describing a date. It’s a duet, with male and female vocals on the lines, “Beneath the full moon/Maybe romantic or maybe it’s scary.” Most of my dates are a combination of the two, but that’s just me. Like most of these songs, there are some quirky lyrics. The lines that stand out for me are: “Who’s that on the sofa/I don’t remember that guy coming over/Oh, that’s right, it’s a full moon.”

“Monogamy Blues” is a cute duet about a couple in love, but bored. We hear both the male and female perspective on the relationship, which really makes it a love song, as this is something they’re doing together – the song itself. We hear the woman first: “But lately we don’t do much/We’re lazy and out of touch/I’ve forgotten what I used to be.”  And then the man: “Other people sure are cute compared to you in the morning/Not to mention that doing the same thing every day sure can be boring.” Yet the song has such a positive, optimistic feel in spite of some of the lines. And then, interestingly, it moves into them starting a band. “I’m taking suggestions on things that I could do/Because I’m still with you/You, you, you/You, you, you, you.” “Monogamy Blues” was written by Peter Demakos and Claire Whitehead.

Baseball is by far the best sport (I’m a huge Red Sox fan). The Toronto Blue Jays won the World Series in 1992 and again in 1993. “Oh, Baseball” is about the 1993 World Series, and about Joe Carter’s walk-off home run. “And the city some call T.O.’s never really been the same.” (I’ve never heard Toronto called “T.O.,” but I haven’t spent enough time there.) This is a slow, cool tune about a city being excited, its people coming together. And there is some wonderful work on violin by Claire Whitehead near the end, which I love.