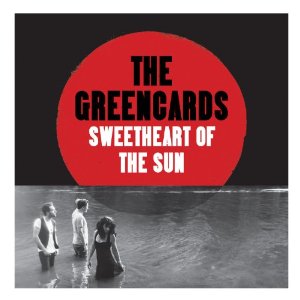 Sweetheart Of The Sun, the new CD by the Greencards, is a somewhat more mellow affair than their last release, The Brick Album. It might seem to lack the raw power of a track like that album’s “Make It Out West,” but this is in fact a more beautiful album in many ways. Check out the wonderful “Traveler’s Song,” for example, particularly at the end with the lines, “We’re all travelers/Hope we’ll meet again someday.” This album is really about the vocals, which are often gorgeous. At times, you just have to relax and let them carry you, like on “Love And Other Errors,” where their vocals are like a warm breeze.

This album sees the band moving even farther away from traditional bluegrass. Sweetheart Of The Sun takes you on an interesting journey, sometimes even within individual tracks, as a song will take a different direction toward the end (such as “Wide Eyed Immigrant”). A lot of the songs have imagery related to the ocean.

The album opens with “Once And Gone,” a folk tune with a very pretty and actually soothing instrumental section on acoustic guitar to begin the song. The vocals are particularly impressive on “Shine down on the ocean.” This is a short song, only two minutes. “Once And Gone” was written by Kai Welch, Kym Warner and Carol Young.

The first line of “Forever Mine” is, “I just want to climb inside the perfect melody.” It seems this band is certainly able to do that, or at least to create excellent melodies for us to climb inside. This song has a brighter, fuller sound than the opening track. It is full of positive vibes, with lines like, “Safe upon the golden shore/Maybe you’ll be waiting there for me/Where the losers get to win.”  And then: “You’re forever mine.” “Forever Mine” features David Beck and Paul Cauthen, from Sons Of Fathers, on vocals. This song has a strange ending, with echoes, like performed in a cave at the edge of the ocean.

“Black, Black Water” is very pretty, particularly due to the vocals. The song has some interesting imagery related to water, and also an interesting structure. If you allow it to, this song brings you down then lifts you up several times. This is one of my favorite tracks. It was written by Carol Young, Kym Warner and Kai Welch.

“Boxcar Boys” is a really interesting song because it has an old-time European vibe, but also at times an easy-going feel to the vocals. There are also well placed hand-claps.

“Fly” is also interesting, partly because of its structure. It has different sections, the first somewhat mellow, with the lines, “Once I had a dream that made me cry/Once I woke to find I could not fly.” The second section begins a minute and a half in, with more energy (and with a sort of Beatles feel to the vocals at moments - think, "If I Needed Someone"). Then there is a great instrumental section, leading to the repetition of the line, “I’ll chase the sun around the world.”  The song fades out at the four-minute mark, changing into a moody guitar instrumental piece. This is a really strong track, and is one I enjoy more and more each time I listen to it.

Though the focus of this album often seems to be the beautiful vocals and wonderful imagery, there are three instrumental tracks. The first, “Paddle The Torrens,” is a pretty, joyful tune. The song feels to me like the perfect day when time ceases to be a factor and you let go to a certain extent and allow yourself to be a part of the world.

The second instrumental, “Midnight Ferry,” is a short, darkly pretty track written by Kym Warner. The third, “Ride & Sway,” also composed by Kym Warner, is a sweet and uplifting tune with a nice lead guitar section. This song seems designed to make you feel good, make you smile. It also makes me want to go outside with friends and run in the sand and skip stones over the ocean. This is actually one of my favorite tracks.

Sweetheart Of The Sun is scheduled to be released on August 20, 2013 on Darling Street Records.

Posted by Michael Doherty at 12:35 PM