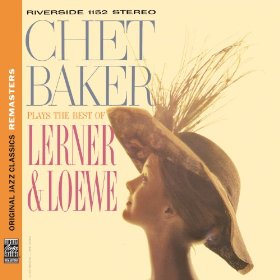 Concord Music Group, as part of its Original Jazz Classics Remasters series, is re-issuing Chet Baker Plays The Best Of Lerner & Loewe. This album includes selections from four musicals by Alan Jay Lerner and Frederick Loewe, and features some excellent musicians. The four musicals represented here are My Fair Lady (half of the tracks are from this one), Brigadoon, Gigi and Paint Your Wagon.

Let me admit right here that I’ve never attended performances of any of the musicals covered on this album, so I don’t know just how these tracks fit into the overall structure or plots, or how they tie in thematically. (My mom did buy me a DVD of the film version of Paint Your Wagon, but I haven’t been able to bring myself to watch it yet, even though I’m a big fan of Lee Marvin – maybe because I’m a big fan of his.)

These aren’t the most exciting selections in the jazz realm, but there is some really good playing. Obviously Chet Baker does some wonderful work on trumpet, but this album also features Herbie Mann, Zoot Sims, Pepper Adams, Bob Corwin, Earl May and Clifford Jarvis. And Bill Evans is on piano for half the tracks, and it’s always a treat to hear him. These tracks were recorded in two days, July 21 and 22, 1959. They were remastered for this re-issue by Joe Tarantino. This re-issue includes new liner notes by James Rozzi, as well as the original liner notes by Orrin Keepnews.

This album includes four tunes from My Fair Lady, which played on Broadway in 1956. It opens with “I’ve Grown Accustomed To Her Face,” a sweet, slow, pretty tune, with the horns blowing gently over a nice rhythm. It has an easy-going pace. I particularly like toward the end when the horns are interacting.

Chet Baker gives us a fairly playful version of “I Could Have Danced All Night,” with a silly, rather odd intro. Herbie Mann plays piccolo on this track. Bill Evans is on piano, and has a nice lead section, which is my favorite part of this version.

“On The Street Where You Live” opens with a sort of call-and-response section, but these are simple themes, nothing challenging for anyone to follow. More interesting is Chet Baker’s lead section. This track also includes a lead by Bob Corwin on piano.

“Show Me” is a fast-paced, bright tune, giving Clifford Jarvis a few moments to stretch and loosen up on drums. And I love Herbie Mann’s flute lead on this one. Each of the leads offers some interesting stuff.

The CD includes two selections from Brigadoon, which opened on Broadway in 1947. The first is “The Heather On The Hill,” which starts with a curious bass line, and then eases in with a relaxed vibe. Herbie Mann plays alto flute on this track. The second, “Almost Like Being In Love,” is a more up-tempo song, and brings out some spirited playing from all the musicians. I totally dig Earl May’s bass line (he even gets a brief lead section). And Chet Baker’s trumpet lead is wonderful. Clifford Jarvis gets a chance to do some interesting work on drums.

There is a single selection from Gigi, that being “Thank Heaven For Little Girls.” This track’s intro features Bill Evans on piano, playing over the bass line briefly before the horns come in. This is another track where the bass line is so enjoyable. And I love the later section when Bill Evans takes the lead spot, with the spirited bass line going strong beneath him.

I only knew the Smother Brothers’ version of “I Talk To The Trees” from some comedy album of my youth. I always liked that routine, and I think it will always keep me from taking this song too seriously. “I Talk To The Trees” is the sole track from Paint Your Wagon (the musical ran on Broadway in 1951). It’s a slow, mellow tune. The horns are gorgeous, particularly when they blend, merging at moments that are striking. Herbie Mann has a lead section on alto flute, which leads to Bill Evans’ lead.

Plays The Best Of Lerner & Loewe was released on July 23, 2013 through Concord Music Group. Also released on that date were Bill Evans Trio: How My Heart Sings!, Cannonball Adderley With Milt Jackson: Things Are Getting Better, Thelonious Monk/Gerry Mulligan: Mulligan Meets Monk, and Wes Montgomery: So Much Guitar!

Also released earlier in this series was Chet Baker’s Sings - It Could Happen To You.

Posted by Michael Doherty at 12:15 PM