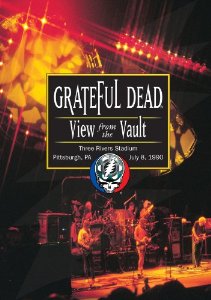 In the summer of 1990 four friends and I hit the road in my van for part of the Grateful Dead tour. I was eighteen. It was a fantastic time. Our first stop was Pittsburgh. We arrived the night before and stayed with a friend of a friend. I got no sleep because another guy we picked up snored. But no matter, I was wide awake for the show. Crosby, Stills & Nash opened, and then the Dead took the stage.

This show – at Three Rivers Stadium, July 8th – was released as View From The Vault, now re-issued by Shout! Factory.  It’s great to revisit this show, especially as we were fairly far back that night (on Jerry’s side). I’m getting a much better view with this DVD, as of course there are lots of close-ups. I remember it was hot (but not nearly as hot as the next show in Raleigh – that was a killer of a day). A lot of the band is in shorts. The Dead opened with “Touch Of Grey,” the band’s one real hit (it was the song that opened my first Dead show two and a half years earlier). “We will get by/We will survive,” and then straight into “Greatest Story Ever Told.” I love watching that connection between Jerry and Brent. They each got such a kick out of the other’s playing. You can totally see it in a lot of these shots. (This turned out to be Brent Mydland’s last tour – he died shortly after the tour ended.)

During a fairly sweet “Row Jimmy” (though with a couple of missed cues), a hot air balloon passes over, and Bob acknowledges it. (Man, I don’t even remember that. I do, however, remember at another show a glider dipping its wings in time to “To Lay Me Down.”) For all the folks in the Phil Zone, Phil Lesh sings Dylan’s “Just Like Tom Thumb’s Blues,” and at the beginning we see Phil signaling the others to play the intro a second time through. And check out the changes in the lyrics. The first set ends with a really good “Let It Grow.”

Of course, it’s the second set where the magic happens. The sun is now down, and the band is ready to cook. They open with “Samson And Delilah,” and then go into my favorite pairing of songs – “Eyes Of The World” into “Estimated Prophet.” It’s during “Eyes” that the folks in charge of the visuals start tossing stuff our way – shots of space, Earth, and so on. You have to keep in mind that people would time their trips so they’d peak during the second set. This is a fun “Eyes Of The World,” and – as if there were any doubt – Bob holds up eight fingers to the drummers to let them know “Estimated Prophet” is next. And it’s a very cool rendition, with Bob having a lot of fun with the vocal reverb.

And then they go into another of the band’s greatest songs, “Terrapin Station.” I don’t know why, but I’m always so happy when Jerry sings the line, “To get to Terrapin.” It’s like we’ve been on this journey, and it’s that moment when we make a breakthrough, reach some new plateau. You know? Then, and of course when he sings, “Inspiration.” As “Terrapin” ends, Bill and Mickey kick it into gear, but the others don’t leave the stage quite yet, and we’re treated to a cool jam before “Drums.” And there is some great footage of Mickey attacking those giant toms. There is also a lot of extra visual stuff during this segment, including rotating skulls and shots of farmers. “Drums” leads to a particularly interesting “Space.”

I believe “I Need A Miracle” is the first Grateful Dead song I never heard. I was like seven or eight years old, and it played on the school bus radio (so you know the sound was just perfect). And I’ve always dug this tune. “Too much of everything is just enough.” You can hear the audience singing, “I need a miracle every day.” Bob then goes into that great, mean tune, “Wang Dang Doodle.”

Jerry does a really nice, moving version of “Black Peter.” Bob follows it with “Throwing Stones,” which of course brings more shots of Earth. Bob is great when he repeats “We are on our own.” And during the “Ashes, Ashes” section, the crowd claps the Bo Diddley beat, but the band surprisingly goes into “Turn On Your Lovelight” instead of “Not Fade Away.” The encore is “Knockin’ On Heaven’s Door.”  This was  a heavily Bob night, with his eleven tunes to Jerry’s seven, with one Phil and no Brent.

It’s funny – we used to refer to extra songs as “filler” on our concert tapes. Now it’s “bonus material.” Anyway, this DVD provides a couple of tunes from the previous show, July 6th in Louisville – “Standing On The Moon” into “He’s Gone.” There is a really good jam at the end of “He’s Gone,” and I particularly like those shots of Jerry smiling at Bob. This leads to “Drums,” which plays during the DVD’s closing credits.

View From The Vault was released on June 11, 2013 through Shout! Factory.

(Note: I also posted this review on Pop Culture Beast.)
Posted by Michael Doherty at 4:14 PM