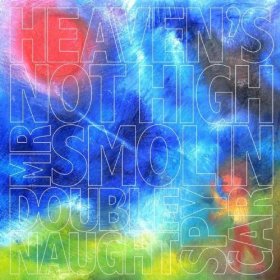 Mr. Smolin teams up with Double Naught Spy Car for Heaven’s Not High, an album full of great grooves, and interesting (and intelligent) lyrics. I knew of Barry Smolin from his radio program, “The Music Never Stops,” which was the only radio show in Los Angeles I made a point of listening to every week (especially back when it ran four hours). Now he hosts “Head Room,” and I try to catch that one whenever I can. I’d heard he did his own music, but I had no idea it was this damn good. In fact, there is only one track on this CD that doesn’t quite work for me.

The opening track, “In The Hoosegow,” has sudden explosions like bursts of hard rock from the 1970s. It then kicks in, with a nice groove, and the lyrics come at you in a stream of consciousness-like style. There is a seriously groovy instrumental section, with the guitar rising above the surface. It sounds very cool.  The song then returns briefly back to that 1970s rock theme. Here is a taste of the lyrics: “They're gonna throw you in the hoosegow angel/In a dungeon tower/Where every second feels just like an hour/And in the hoosegow angel/Every hour feels like forever.” (Time gets like that sometimes.) And they do some fun stuff with the vocals right at the end

“It’s We Who Turn” eases in for thirty seconds or so, before taking on a kind of funky rhythm. The first lines are, “I woke up underneath a tree/I woke up outside history.” Oh yes, we've all had moments like that. This tune features some nice stuff on keys, and also some good accents on drums. I do love the playful delivery on certain lines, even certain words, like “ascended” and “rhyme.” The song goes off exploring for a bit around the six-minute mark, before returning to its funky base.

“Carnival” begins with a definite late 1950s rock and roll vibe – like the mid-tempo song in the high school dance scene from a movie. (Think Paul Anka’s “Diana” or maybe “Those Magic Changes” from Grease.) And the opening lines completely fit in with that theme: “I'll take you to the carnival/I'll win you a great big prize tonight/I'll take you to the carnival/You'll forget the other guys tonight.” These guys play with that theme, not feeling restrained by any sort of boundaries or expectations that go with it; however, the song retains a kind of beautiful innocence. And then Barry Smolin sings, “I’ll take you to the carnival/You are in for a surprise tonight.” And it ends with a surprising, delightful “cha cha cha cha.”

“One And The Same” feels kind of like a song from one of those great late 1960s, early 1970s counterculture films, you know where there is a lot of dancing and spinning lights, and they keep focusing on one long-haired girl in a mini-dress. Particularly in the chorus. It’s a sound that I totally dig. And of course these guys move out from there. Here is the chorus: “We are one and the same/We're a force with no name/We're a face in the flame of creation/We can all lay fair claim/To a stake in the game/We are one in the same situation."

“No Bit Of Difference” is a fun rock tune with a bright feel, and some lyrics that come at you rapidly. It contains references to Mary Poppins, Laurie Partridge and Tracy Ullman. I love these lines: “Remember this, my friend/You're insignificant/Nothing matters/Much less that you came and went.” But “Of a split infinity” is possibly my favorite phrase on the album (because I love plays on words, and I still try to refrain from splitting infinitives.)

There is a groovy gypsy-type vibe to “Don’t You Believe It,” with some wonderful backing vocals. Plus, I really dig these lyrics: “Don’t you believe it when they find the answer/Don’t you agree to heed the call.” And then, “Don't you agree to be in thrall/Don't you believe it when the final answer/Proclaims to save us all.” Very nice. I just love the feel of this tune. And it features some deliciously hypnotic work on guitar.

“Faery Lands Forlorn” is the only one that doesn’t work for me. It feels a bit monotonous, and has a repetitive bit on piano – one high note hit in series of threes.

“The Devil Isn’t Real” is an odd song, with its wonderfully joyous delivery of the chorus and its sweet piano part, and a section that feels like a children’s song. It has a very positive feel, which is totally infectious. I always thought the Devil was a very silly idea.

The album ends with an epic, twenty-one-minute track – the title track, “Heaven’s Not High.”  Like all of these tracks, certain lines jump out at me each time I listen. With this track, it’s “Afraid to admit what you do not know” and “Find a certain comfort in confusion.” As you might expect from a twenty-one-minute track, there is some seriously good jamming. This one definitely takes you on a wild journey, though it does kind of drift off at the very end.

Musicians appearing on this album are Mr. Smolin on vocals, piano, organ and harpsichord; Paul Lacques on guitar; Marcus Watkins on guitar; Marc Doten on bass, synth and backing vocals; and Joe Berardi on drums and percussion. Joining them are Harvey Canter, Patria Jacobs, Gwendolyn Sanford and Seth Kurland on backing vocals.

Posted by Michael Doherty at 1:28 PM