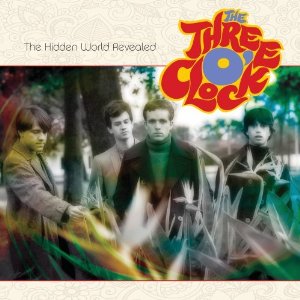 The 1980s were the last great time for pop music (and really only up until 1986, the year pop music went horribly wrong). And that was the time of The Three O’Clock, a southern California band that mixed pop and punk, with a definite 1960s influence as well. The new compilation, The Hidden World Revealed, features recordings from 1981 to 1986. Ten of these tracks were previously unreleased, including alternate versions of some of their coolest tunes, and even some demos, one of which is from when the band was still called The Salvation Army.

This is a great collection of material. After all, it’s 1980s pop with some punk sensibilities and 1960s vibes – what could be more fucking perfect? And there are plenty of previously unreleased goodies, including an early version of “In Love In Too” titled “Why Cream Curdles In Orange Tea,” which has a silly spoken word section. (Oddly, both versions are exactly the same length – 3 minutes 15 seconds.) There is also an alternate version of the cool “I Go Wild.” This collection even includes a radio spot recorded for Rodney Bingenheimer’s KROQ radio program.

This special compilation’s liner notes include new pieces by band members Michael Quercio and Louis Gutierrez, as well as thoughts on each track by Danny Benair. By the way, there are actually twenty-one tracks. There is an unlisted track at the end, a different version of “Jet Fighter.” So actually, probably eleven of these tracks were previously unissued, as I’m guessing that one wasn’t released before.

The Hidden World Revealed opens with “All In Good Time,” and this is really the best pop has to offer. It’s got a good beat, some bright tones, and is the kind of tune that makes you happy. It’s just a lot of fun. This song was written by Michael Quercio, and was originally included on Radio Tokyo Tapes (1983).

“With A Cantaloupe Girlfriend” is pop with a punk rhythm, and man, I love the bass. This song was originally issued on Baroque Hoedown (1982). In the liner notes, Danny Benair says it’s his wife that does the whispering, but that she still hasn’t revealed what it was she said. (Bring her over here, Danny, we have ways of making her talk.)

“Lucifer Sam” is a seriously cool song, and one of only a few covers to be included in this collection, this one written by the always-interesting Syd Barrett (the only Pink Floyd worth listening to is the early stuff with Syd – and don’t even think about arguing with me on that). This version is excellent, veering toward punk at times, but also with that great, tough 1960s vibe. This track was originally issued as a flipside of a fan club 7-inch.

“Jet Fighter” is one of the band’s most well-known tunes. This is good, simple pop rock, with that steady beat on the snare. “Jet fighter, man, that’s what I am/’Cause tanks go too slow/Airplanes flying, yet I feel so low.” As I mentioned, there is another version of this song at the end of the disc.  After about thirty seconds of silence, the CD’s final track begins – a rehearsal of “Jet Fighter.”

“When Lightening Starts” is a glorious bit of pop with a dance feel. It’s one of those songs it’s impossible to dislike (again, I’m in love with the bass line). This is an alternate version, without horns. There are some seriously sweet backing vocals on this track.

“Sound Surrounds” is a wonderful, playful tune that was previously unissued. This is a demo recorded in 1984. There is an instrumental section that is a total joy to listen to. Check out that guitar part by Louis Gutierrez. And I love what Mickey Mariano does on keys. This is one of my favorite tracks. It was written by Michael Quercio and Louis Gutierrez.

“In My Own Time” is one of the collection’s cover tunes, written by Robin Gibb and Barry Gibb. (This song was originally released in 1967 on Bee Gees 1st) This one has a great 1960s rock groove. And I dig the guitar part. I just need some go-go dancers in a cage to go along with it. This version was previously unreleased.

“Jennifer Only” is a very early demo, recorded when the band was still called The Salvation Army. The sound quality is not great, but hell, it was recorded in Michael’s garage, so you have to take it as it is. This one is more in the punk vein. This track was previously unreleased.

The Hidden World Revealed was released on June 25, 2013 through Omnivore Recordings and Frontier Records.

Posted by Michael Doherty at 1:05 PM