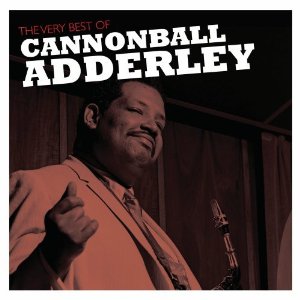 The Very Best Of Cannonball Adderley contains more than an hour of excellent music by the talented alto saxophone player. This collection features material from 1958 to 1975, though focusing on the years 1958 to 1963, when he was on the Riverside label. The final two tracks, the ones from the 1970s, are from when he was recorded on Fantasy. The songs are presented mostly in chronological order, and include a nice long live version of "This Here" and a big band track, "Something Different." There is an amazing amount of energy on this disc, and Adderley is joined by some seriously accomplished musicians, such as Philly Joe Jones, Percy Heath, Art Blakey, Bobby Timmons, Sam Jones, Airto Moreira and of course his brother, Nat Adderley.

This collection opens with "A Little Taste," an original composition from Portrait Of Cannonball (1958). This has a bright, full sound from the start, and gets looser when the band gets into the song, helped in part by Philly Joe Jones' drumming and some excellent work on bass by Sam Jones. Cannonball's lead has a wonderful energy, and is full of delightful surprises. It's joyous. Blue Mitchell's lead on trumpet also has great joy, and that leads to Bill Evans taking control on piano, though only briefly.

"Things Are Getting Better"

"Things Are Getting Better," the title track from a 1958 release, was co-written by Cannonball Adderley and D. Veronica Langdon. This is a light, somewhat silly song that just makes you feel good. It has an easy way about it, though Cannonball's lead reminds me of early rock and roll at times. I really like the play between bass and piano during Percy Heath's lead section. This track also features Milt Jackson on vibes.

"This Here" has such a great groove. It was written by Bobby Timmons, who plays piano on this track, and who really helps with that catchy rhythm and groove. I completely love his lead on piano, which flows perfectly from the main section of the song, not sounding like a break, as solos sometimes do. And Cannonball is absolutely fantastic, his horn dancing and singing. And his younger brother Nat really lets it rip on cornet. This is an excellent song, and is probably my favorite track from this collection. It's a live track from The Cannonball Adderley Quintet In San Francisco (from 1959).

"Know What I Mean?" is a Bill Evans composition from the album of the same name, which was re-issued last year as part of the Original Jazz Classics Remasters series (that re-issue features a second version of this song in the bonus tracks). This song begins with Bill Evans on piano, then eases in with a slow tempo. This is such an interesting song, as it takes a surprising turn a couple of minutes in, led by Percy Heath on bass and Connie Kay on drums.

"Work Song" is a live track recorded in Tokyo in 1963, with a spoken intro by Cannonball Adderley. This is a composition by Nat Adderley, and it's is a fantastic track, with a tremendous amount of energy. The band - Cannonball Adderley Sextet - really cooks on this one.  This track was originally released on Nippon Soul.

The Very Best Of Cannonball Adderley concludes with two tracks from the 1970s. The first is "Jive Samba," written by Nat Adderley, and featuring Airto Moreira on percussion.  This track was originally included on Phenix.

The second is "Inside Straight," a tune co-written by both Adderley brothers. This is a seriously funky jazz tune, with a somewhat heavy, yet totally fun vibe. It gets ridiculous at a certain point - you'll know it when you hear it, and you'll probably love it like I do.  This song is the title track from the 1973 album.