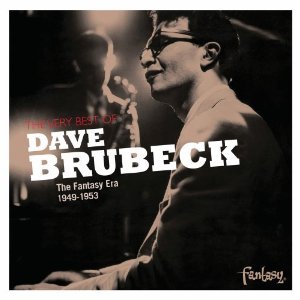 Dave Brubeck has been one of my favorite pianists since my uncle gave me a copy of Time Out when I was in my late teens. That album has what is still probably his most famous tune, "Take Five."  Concord Music Group is releasing a series of The Very Best Of compilations, including one of Dave Brubeck's music.

The Very Best Of Dave Brubeck: The Fantasy Era 1949 - 1953 is early Dave Brubeck, featuring music years before the release of "Take Five."  Most of these pieces are short, with the exceptions of the live tracks that close out the collection. All but one of these tracks are covers, including four Rodgers and Hart tunes, one Gershwin song and one Cole Porter composition. Most of these tunes features Paul Desmond on alto saxophone.

All of the tracks were previously released.

The Very Best Of Dave Brubeck opens with a fast-paced, bright rendition of the famous Rodgers and Hart composition, "Blue Moon." Performed by The Dave Brubeck Trio, this might be the most fun version I've ever heard of this tune. It still retains something of the song's inherent beauty, of course, while finding new areas within its structure. And I dig that brief bass section. The song has an interesting ending.

By the way, this song is the earliest recording in this collection, from September of 1949.

Dave Brubeck's version of "Let's Fall In Love" also has a quick tempo, and he highlights the fun elements of this tune (without, of course, the lyrics, which always felt like the most delightful part of this song to me). Dave Brubeck makes this his own, and adds some wonderful touches on piano. It's over so quickly. I'd like to hear what else he would have done with it, had he been given another two or three minutes.

"Body And Soul" starts off slower, but Carl Tjader is on bongos rather than the kit, and that provides a certain type of energy. And soon the tempo picks up. It's interesting how well piano and bongos can work together, with sections where it's almost a sort of strange duet.  "Body And Soul" was written by Johnny Green, Edward Heyman and Robert Sour.

"My Heart Stood Still," a Rodgers and Hart song, is performed as a piano solo. It starts slow and sweet, but then takes on that strange energy that a lot of Brubeck's well known work has. You can really hear at times in this piece where he was heading. And then he returns to the song's opening feel, to end softly, which is just perfect. This track was recorded in October of 1953.

"This Can't Be Love"

I love Dave Brubeck's piano lead section on "This Can't Be Love." It has an untamed, almost aggressive quality that is fantastic, over that great steady rhythm by Wyatt "Bull" Ruther on bass and Herb Barman on drums. I also like Paul Desmond's part on alto saxophone, but once Brubeck takes over, it's honestly hard to recall what Desmond had done. "This Can't Be Love" is definitely one of my favorites from this collection. This track was recorded in 1952, and was originally released on Jazz At Storyville.

Dave Brubeck's rendition of the Gershwin tune "A Foggy Day" is an exciting and delightful piece of music. Really, this song feels like a living, breathing character. The changes in the song are like the changing emotions and gait of a person. "A Foggy Day" was written by George Gershwin and Ira Gershwin, and was included in the 1937 film A Damsel In Distress.

"Lyons Busy" is the sole Dave Brubeck composition in this collection. The song's title comes from a radio program hosted by Jimmy Lyons, a San Francisco DJ. This track comes on strong, and the bass is powerful, even during Brubeck's lead. I like Paul Desmond's work on this song, in his early lead section, and particularly toward the end of the track.

The album concludes with three live tracks, all recorded in 1953. The first is "Stardust." I absolutely love what Paul Desmond does on this song, so cool and so sweet. And then Brubeck comes in, and offers such moments of quiet beauty that he feels like an angel, able to sweep away misery, at least for a time. This track is from The Dave Brubeck Quartet's Jazz At Oberlin.

The last two tracks were recorded in December of 1953 at the College of the Pacific in Stockton, California.  I love the energy on "Give A Little Whistle" - and this is probably the coolest track in this collection. And as great as Dave Brubeck's lead section is, I'm actually even more enamored of the moments just before that when he and Paul Desmond are playing together.

This collection ends with a sweet version of "For All We Know," writen by Samuel Lewis and J. Fred Coots.