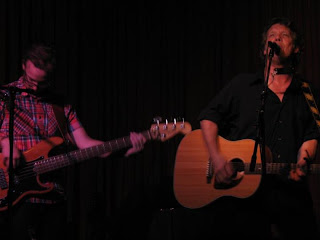 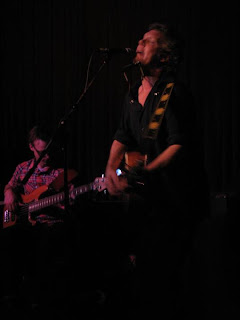 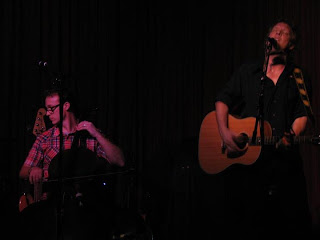 Steve Forbert did an excellent set at The Hotel Cafe in Hollywood last night. On the eve of the release of his new album, Over With You, he focused on much of that CD's material. That was fine with me, as he played most of my favorites from that album, including "All I Need To Do" and "Don't Look Down, Pollyanna."  Sitting in with him for the set were Ben Sollee on bass and cello, and Jordan Ellis on drums.  As I've mentioned before, I'm a sucker for cello, so I completely enjoyed the set. Plus, Steve Forbert is a seriously good performer.  There is something casual, yet committed about his stage presence, something almost goofy and endearing. And there is definitely something silly in the way he ends the songs.

With acoustic guitar and harmonica, Steve took the stage at 8 o'clock, saying, "Who's here on a Monday night? What's happening?" He then launched into the crowd-pleasing "Going Down To Laurel," the opening track from his debut album, Alive On Arrival.  After a couple of false starts to "All I Need To Do," Ben joked to him, "L.A. does this."

Before "Blackbird Tune," Steve said, "Ben is going to play some cello for you."  And at the end of that song, our server caught on fire. But we got her out quickly, and she surprisingly didn't seem at all alarmed. She completely kept her cool. In fact, she asked me if I were all right.  That led to one of the happiest-sounding tunes from the new record, "That'd Be Alright." Ben did some backing vocals on this one, repeating, "That'd be alright."

In introducing "Baby, I Know," Steve said it was called, "Baby, I Know You're Only 90 Percent Happy With Me," then joked, "Or should it be called 'Wishful Thinking'?"

Ben played cello again on "Over With You," the new CD's title track.  It's such a pretty song, and the audience got very quiet for this one.  After that song, a drunk guy in the front urged other audience members to "get closer to the guy." He said it several times. I wonder if he perhaps forgot Steve Forbert's name. Steve then played the fun "What Kinda Guy."  After "Steve Forbert's Midsummer Night's Toast," people shouted out lots of requests, all of which Steve happily ignored. Instead he played one of my favorites from the new album, "Don't Look Down, Pollyanna."  I absolutely love the cello part in that song.

He ended his set with "Romeo's Tune," which of course was no surprise. That song was a hit back in 1979 and still  sounds fresh. So though the crowd didn't hear its requests, everyone seemed happy at the end of the set.

Set List
After Steve's set, Ben Sollee and Jordan Ellis stayed and did an impressive set.  For most of that set, Ben played cello, and he played the hell out of it.  Cello, percussion, vocals.  I dug the entire set, but there were at least two or three tunes that really blew me away.  I'm looking forward to hearing Ben's new album when it's released. By the way, during his set, Ben said that Steve Forbert gave such a good show "that his belt is still on stage." He then joked that they'd take bids on it at the end of the night.
Posted by Michael Doherty at 1:09 PM