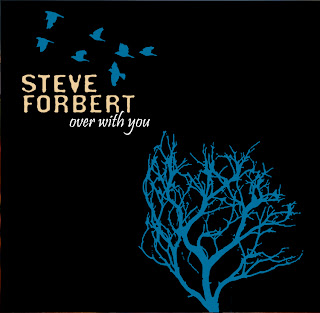 Steve Forbert has been releasing records since the late 1970s. He had a hit with "Romeo's Tune" from his second album in 1979. That song reached number 11 on the Billboard Hot 100 (and completely holds up - I was just listening to it, and it's an excellent song).  (By the way, he has another Shakespeare reference in the title to the song "Steve Forbert's Midsummer Night's Toast," though the lyrics have nothing to do with the play.)  He was nominated for a Grammy in 2004 for Any Old Time, a tribute to Jimmie Rodgers. He's an excellent songwriter, whose songs have been covered by Rosanne Cash, Keith Urban, Marty Stuart and Webb Wilder.  So why don't we all know about this guy?

Sure, his voice isn't as strong these days, but it has character, and character goes a long way. Plus there is an appropriate wariness and vulnerability in his voice that really help sell the songs on his new album, Over With You. These songs really hit me emotionally. And yeah, maybe I'm a wreck these days, but these songs got right on top of me.

Not that these songs are depressing. They're really not. They engage your emotions, which is a positive thing, but the album isn't designed to tear you apart. There is humor in these tunes. Like in "Baby, I Know" the repeated line is "Baby, I know you're only ninety percent happy with me."  I love that line, because it's funny in several ways - it's funny that he's acknowledging that he hasn't made her completely happy, that he knows and indicates the exact percentage, and also that the percentage is so high, yet he's still working on improving (after all, it seems a lot of people would be thrilled with 90%).  And I just love the line "Things don't tend to work out like I planned them, but they could" in "Can't We Get Together" - that line has a great mix of sadness and optimism.  And then you have a song like "Metal Marie," which is probably the most catchy tune on the album (there's even a reggae element to the song).

Steve Forbert also has some talented musicians helping him out on this new release, including Ben Harper on guitar. All the songs on Over With You are originals.

"All I Asked Of You"

Over With You opens with "All I asked Of You,"an intimate-sounding song about a problematic relationship. His rough, somewhat awkward voice works to make us feel more for him and to put us firmly on his side, because it lacks arrogance and certainty. It's an emotional and vulnerable voice, which is perfect for lines like "All I asked of you was a chance to make it right" and "This is not the way it should be, my darling/You should be my wife." It's like a song that wishes it could be a love song. And I can't help but love it.

"All I Need To Do" is a more upbeat tune with definite pop elements, though it's about a relationship that has ended. This is one of my favorites, partly because of the bitter humor in lines like, "I'll get by without you/And I'm going to like it/So I say to myself/Find a new match and strike it"  and "All I need to do is just to find someone who's just like you/All I need to change is just the seven letters of your name."  His voice really strains on the line "It's true that I worship the ground you walk upon," and though that strain works in the song, it would be interesting to hear someone else cover this song.  (As a side note, this is one of the many songs that rhyme "self" with "shelf.")

"That'd Be Alright" features is another happy-sounding tune, with more of a rock sound at times, and a catchy guitar part.  Ben Harper plays lead guitar on this track. (This album was produced by Chris Goldsmith, who also produced the album There Will Be A Light by Ben Harper and The Blind Boys Of Alabama.) "That'd Be Alright" begins, "Hold on tight 'cause it's coming up a full moon/You might find that you need some company/This wild night could take any turn at all soon/I don't mind if it brings you back to me/That'd be alright."  I really like those lyrics.

"Over With You," the CD's title track, is a slow, heartfelt and intimate song. It's a song in which he displays unabashed affection, shown in lines like, "What means most to me/As in time you'll see/Is your happiness and your peace of mind." He also sings, "Forever's such an easy word to say or write on paper." This song features some nice, light playing on keys. It's actually a really pretty tune.

"Don't Look Down, Pollyana" features cello, a gorgeous instrument that I've always had a weakness for. It adds another layer of beauty to this song. This is a wonderful song. Here is a taste of the lyrics: "Shreveport, Louisiana is just as high as Niagra Falls/You feel as if you're over a barrel/Think you might be close to the edge/You're hoping there'll be somebody there/Who will get you back intact off the ledge."  Excellent, right?

Over With You concludes with "Sugarcane Plum Fairy, a bittersweet tune. He sings of the magic of days long gone, with images that are evocative of magic and fairy tales - "wonderland of light," "castle wall." But now "I watch your tired eyes taking care not to meet with mine right." The song features a strange harmonica part - it's interesting, because it sounds almost as if it's struggling, like the man in the song, struggling to regain what was there before.

CD Track List
Joining Steve Forbert on this release are Ben Sollee on cello and bass, Jason Yates on piano and organ, Michael Jerome on drums and Sheldon Gomberg on electric and upright bass.  Ben Harper plays guitar on three tracks: "In Love With You," "That'd Be Alright" and "Don't Look Down, Pollyana."

Over With You is scheduled to be released on September 11, 2012 on Blue Corn Music.

Posted by Michael Doherty at 4:45 PM