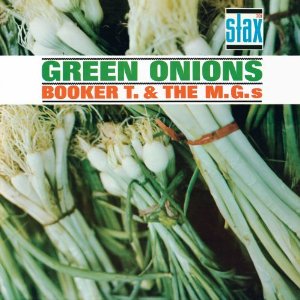 "Green Onions" is probably the coolest rock instrumental tune ever recorded. It's definitely way up there on the list, if not at the very top. It was released as a single, and then as the title track from Booker T. & The MGs' first album. Concord Music Group is now releasing Green Onions as part of their Stax Remasters series.

Booker T. & The MGs were essentially the house band for Stax, appearing on albums by Otis Redding, Johnnie Taylor and Albert King, among others.  This re-issue of the Green Onions album includes new liner notes with information on how that famous title song came about. It was created quickly as the intended flip side to "Behave Yourself" (a song which is also included on this album).  And that song came about only because the four members had been hired to back Billy Lee Riley, and after a short session they just started jamming.

All tracks on this album are instrumentals. Most are covers, including a cool version of Ray Charles' "I Got A Woman" and an incredible rendition of "Lonely Avenue" (which Ray Charles also recorded).  The only one that doesn't quite work for me is "Twist And Shout." It's not bad, but just seems a less inspired choice.  There are two bonus tracks, which are live recordings from 1965 (after Donald "Duck" Dunn had joined the band).

Green Onions opens with its famous title track. In some ways, this song is so simple. Yet I never get tired of it. And it sets a very specific tone whenever it's used in a film, which is often - movies like American Graffiti (1973), The Flamingo Kid (1984), For the Boys (1991) and Striptease (1996) use it. This song has such a great groove. Written by Booker T. Jones, Steve Cropper, Al Jackson and Lewis Steinberg, it was first released as a single and it reached #1 on the R&B chart and #3 on the pop chart.  I love that guitar part by Steve Cropper about a minute and a half in - just those great accents. And of course Booker T's organ work is perfect.

"Green Onions" was also included on a compilation titled Stax Number Ones, which was released in 2010.

"Rinky-Dink" is a fun tune written by David Clowney and Paul Winley (and recorded by Dave Baby Cortez). For some reason, possibly the prominence of the organ, this song reminds me of going to an afternoon baseball game in Boston. I feel like someone should shout "Play ball" at the end of the song. It just has that great summer vibe about it.

"Mo' Onions" is the only original track written for this album (the other two originals having had already been released as a single). This song is exactly what its title suggests, a sequel to "Green Onions." It has a slightly slower, looser feel.  And yeah, I love it.  "Mo' Onions" was written by all four band members, just as "Green Onions" was.  It was later released as a single.

"Behave Yourself" is the song that started it all, sort of. It's a great slow blues number, with some wonderful stuff by Booker T. Jones on organ.  This was intended to be the A side of the single, but was made the flip side after Steve Cropper convinced the owner of Stax that "Green Onions" was the better tune.  But this song could easily be an A-side as well.  It's seriously cool. It feels like a hot night in the city when your plans are loose, but you've got a good group of people with you, and there are odd promises in the air.

This re-issue includes two bonus tracks, both being live recordings from August of 1965.  The first is a high-energy rendition of "Green Onions," with some different stuff from Steve Cropper on guitar. It includes the band's introduction at the beginning. Also, this version has Donald "Duck" Dunn on bass; he had joined the band in 1964. The track fades out, which is a shame. I'd love to hear the rest of it.

Packy Axton joined the band for a fun version of "Can't Sit Down," the CD's second bonus track. Each member takes a turn at lead, including Donald "Duck" Dunn on bass and Al Jackson on drums.  I can't help but love this rendition, though it definitely gets messy at the end.

Both bonus tracks were originally released on Funky Broadway: Stax Revue Live At The 5/4 Ballroom.

This special re-issue of Green Onions was released on July 24, 2012  through Concord Music Group. Last year, also as part of the Stax Remasters Series, they re-issued Booker T. & The MGs' 1970 album, McLemore Avenue.
Posted by Michael Doherty at 4:19 PM