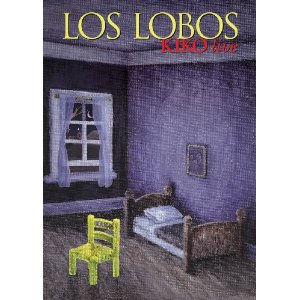 Los Lobos' 1992 release, Kiko, one of my personal favorite records, is getting the special treatment for its twentieth anniversary.  There is a new 20th Anniversary Edition of the album (with bonus tracks) scheduled for release on August 21st. Also to be released on that date is Kiko Live on both CD and DVD.  Kiko Live is a performance from February 24, 2006 of the album in its entirety.  The DVD also features new interviews with all members of the band, as well as with Mitchell Froom, the Kiko producer, and Tchad Blake, the Kiko engineer.  The film begins with interviews, and also has interviews inserted throughout the performance, between songs (never in the middle of a song, of course).

It seems there are at least six cameras capturing this show. There is some use of split screen throughout, and some shots of the audience. But mostly what is captured is this insanely talented band performing one of the greatest albums in the history of music. By the way, the DVD includes the option to just play the concert (without the interviews), which is a cool feature.

The film starts with interviews with band members Conrad Lozano (bass, guitaron, backing vocals), David Hidalgo (vocals, guitar, accordion), Steve Berlin (keyboards, saxophone), Cesar Rosas (vocals, guitar), Louie Perez (vocals, guitar, percussion) and Cougar Estrada (drums, percussion). (Cougar Estrada did not appear on the original release. There were a few different drummers on the original record).  They talk about the record, and how the decision came about to perform it. Cesar jokes that it actually meant rehearsing, something they don't normally do.  And there is footage of them rehearsing at Cesar's house (there is a shot of the Eastside Diner clock on the wall). There is also a bit of footage outside the venue - the House of Blues in San Diego - before the show actually starts.

Los Lobos performs Kiko in its entirety, in the order presented on the original record. So the show opens with "Dream In Blue." I love the drums at the end of the song. It is odd, however, that after the song, the film goes to black, then comes back in. This makes me wonder what was cut. It definitely gives the impression that something is missing. Stage banter? Tuning? Switching instruments? I think a concert film should include everything.  However, this isn't much of an issue throughout, because often after a song, the film will cut to an interview.

After "Wake Up Dolores," the band talks about how Kiko began, the studio being in the poorest area of Los Angeles. And we hear a bit about the song "Angels With Dirty Faces" before seeing the band perform that song. In other interview segments, band members talk about the origins of the band, how they met at James A. Garfield High School. Cesar Rosas says, about the band's name, that a lot of Mexican bands at that time were naming themselves after wildlife.  They also talk about writing the songs, and the way they recorded as they went (often doing only a few takes).

My favorite song from this album is "Saint Behind The Glass," and before that song there is an interview with Louie Perez about writing it. He talks about his childhood home, which had one room in which he, his mother and his sister slept. (And yes, there is a shot of the house.) There was a statue in a glass box, and the song came from that. It's about memory, about recollection, about growing up.  Then a harp is brought on stage for the performance of this song. That's Angel Abundez on harp. The instrumental section is fantastic, especially when the Abundez takes the lead.

Band members talk about learning Mexican folk songs, and how the band played those songs in a restaurant. But then they'd get requests for popular rock songs, so they'd take out the electric instruments and play that stuff too.  Los Lobos opened for The Blasters at the Whiskey. Steve Berlin was playing with the Blasters, and he began sitting in with Los Lobos, and eventually joined the band. Cesar says that's when they evolved from a folk group to a rock group.  That interview segment leads to the performance of "Reva's House," a great rock tune.

There is a lyric flub in "When The Circus Comes." David sings "You left your name carved on a tree" again instead of "I'll scratch your name out on that tree." And in the footage we see him smile as he realizes his mistake. Cesar introduces "Arizona Skies," a moment that's not included on the CD.

Another of my favorites from Kiko is "Two Janes," and there is another interview with Louie about the writing of that song.  He talks about the characters and subjects of the album, but about this song in particular. He had read about two girls who committed suicide by sitting on train tracks.  I didn't know that was the inspiration for that song.  But of course he changed it so that the two girls are two aspects of one person, which is wonderful.  By the way, Louie plays percussion on this song.

Before "Whiskey Trail," the band switches drummers. David says, "This is Dave Jr. over here" as his son sits behind the kit for this one.  Another nice moment.

Toward the end there are interviews with the members about what the record and their music means to them.  Other musicians then join them for the last song, "Rio De Tenampa."  A group called Los Cenzontles, including a great horn section. I love this song, and this rendition is so much better than that on the original record.

The encores played that night are included in the bonus features, rather than as part of the proper film.

This DVD has several bonus features. The first, as already noted, is the encore.  The encore was composed of three songs - "Carabina 30-30," "Volver, Volver" and "La Bamba." All three are sung in Spanish, and before the first tune Cesar jokes with the crowd (one of the only bits of stage banter included in this performance). Louie plays drums for the first two songs of the encore.  And the Angel Abundez returns on harp for "La Bamba."

The second bonus feature is a series of three "Bonus Vignettes": "Hi-Fi Low-Fi," "The Story Of La Bamba" and "The Music Reveals Itself."  All three are more interviews with band members.  The second is about how they played "La Bamba" as a traditional folk song before becoming involved in the film, and then about the expectations of audiences after the film was released.  There is also some truly interesting information about the song itself.  In the third, the band members talk about their experiences with music.

The third bonus feature is a slide show of still photos of the band. Some are old shots in the studio and so on, and then there are lots of shots from the night of this concert.  Another cool feature of the DVD is that the various menus are illustrations of the songs.

Kiko Live is being released on DVD on August 21, 2012 through Shout! Factory.  The CD version of Kiko Live will be released on the same date.

Posted by Michael Doherty at 4:10 PM