David Greenberg and Harpeth Rising: "The End Of The World" (2012) CD Review 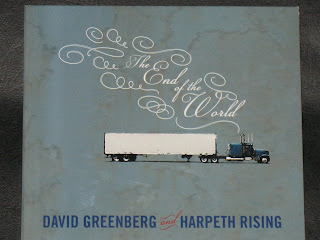 Harpeth Rising is a group of four musicians - Rebecca Reed-Lunn on banjo, Jordana Greenberg on violin, Maria Di Meglio on cello and and Chris Burgess on percussion (they all provide vocals as well). All of them have been playing and studying music since they were children, and their level of expertise and dedication shows on every track of their new album, The End Of The World. These folks are clearly excellent musicians.  Jordana Greenberg is the daughter of singer/songwriter David Greenberg, who joins them on their new release - not just on vocals and guitar, but also as songwriter. He composed all the songs on this album. And the band did the arrangements.

There is a real beauty to a lot of these tracks. (I admit, I've always been a sucker for cello.) These songs have some good stories, and interesting characters, but often it's the violin that really hits me. These songs often feel like they're moving toward a real destination, and that it's somehow important they get there (like in "Outlaw"). I find myself moved by these songs, and immersed in them.

The End Of The World opens with "Goin' My Way," a good folk tune. David Greenberg has that storytelling folksinger thing nailed down, and he infuses his songs with a sense of humor, apparent in lines like these: "I've been a grifter, I've been drifter/You know I've been a wheel/The only thing I never tried was getting real/I've been around, I've been a square/I've been a tumbleweed/I was washed up in the belly of a whale on the beach/He was goin' my way." There is some interesting stuff on banjo in this song, and I love the violin. I really like the instrumental section toward the end. It's beautiful (listen to the cello), and has a great build.

"Evil Eye" has a really good sound, and there are female lead vocals on this one. It's an interesting combination of angry, disheartened folky lyrics (with images like "crooked grinning cop" and "corporation infestation") with the sweet beauty of violin and cello and the happy tones of banjo. And check out these lyrics: "Now darkness waits outside the gates, collecting on a curse/Here among the refugees, wherever we do meet/Each man now doth hold his tongue, but the time will come to speak."

With "Out Of Sight," at times it's clear that David Greenberg is going for a Dylan thing in the lyrics (and in their delivery), like "He asked me where I'm going/And I tell you some long story/Of the sailor who is rowing in his lifeboat in your hand/You say you want to come along/You say that's where you belong/I've already stayed too long/And we all must drown alone" and "And you're terrified of what you'll find/Washed up on the shores of your desire." But what I love about this song are the strings - there is a glorious sadness when these instruments raise their voices.

"Goin' Goin' Gone" is a fun bluegrass-type tune that is just wonderful. It feels like an old song you might have heard around a fire. And it's so refreshing to know songs like this are still being written. It's kind of a relief, you know? And that instrumental break is fantastic. I love it. I know this is one I'm going to be singing to myself from time to time. And I hope to hear folks singing it around a fire sometime soon.  (And the line "One man's beef is another man's rodeo" surprised and delighted me.)

"The End Of The World"

The album closes with its title track, which features a gorgeous opening on strings. The vocal line, when it comes in, immediately brings to mind some early work by Leonard Cohen (not exactly the lyrics themselves, but the way they're presented) - "It's the end of the world/And the gypsy is calling you" (though of course the word "gypsy" is one that Leonard Cohen returns to).  And I like the lines, "Drink and be merry/Tomorrow's your birthday/You have to keep going, though you know how it ends."  The violin and cello have this beautiful dance together. I also really like the percussion on this tune.

Posted by Michael Doherty at 4:15 PM