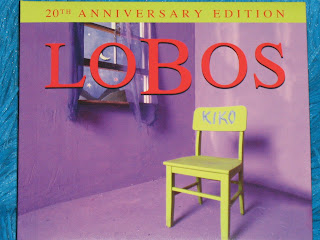 I was something of a fan of Los Lobos in the 1980s. Like a lot of folks, I was turned onto them when "Will The Wolf Survive" was released as a single (it got a lot of airplay in Boston). I saw them in concert in the summer of 1989, and they put on a great show. But it was the release of Kiko in 1992 that really won me over. It's a fantastic record, full of surprises and joy. The band clearly was unafraid of taking chances, and it seems each chance they took paid off well. This album quickly became one of my favorites, and it's remained such for twenty years now. (I can't believe it's been twenty years.)

One thing I love about this record is that each song is its own individual world, each song is distinct. They didn't come up with a single sound or idea and then stick with it for the course of the album. Each song is allowed to develop, to go its own course. And miraculously, each course is intriguing. It's one of those rare records that makes you feel - maybe just for a moment - that you don't need any other records. Everything is here.

This record is so full of great, diverse material, that different tracks will stand out for you at different times. That helps make it an album you can return to again and again. And now is as good a time as any to revisit this wonderful record. For its 20th anniversary, Kiko has been newly remastered, and is being re-issued with five bonus tracks.

From its opening drum rhythm to the entry of its guitar and then vocals, "Dream In Blue" just builds in a perfect way. It's a great opening track. It has a good, positive vibe, and some interesting changes, like daylight melting into night, before the drums begin again, and the line, "Woke up laughing in my bed."

"That Train Don't Stop Here" is a fun combination of blues and rockabilly. It's a song to get you dancing. It has a great groove, and then some serious guitar work. It has a false ending, and I love that it comes screaming back in. I only wish it then went on longer.

"Kiko And The Lavender Moon"

"Kiko And The Lavender Moon," the title track, is one of my favorites. I remember this song surprised me the first time I heard this album, partially because of its old-time elements. This is one I'd listen to over and over again in the early days. My memory is that it was my first favorite track from this record.

"Saint Behind The Glass"

"Saint Behind The Glass" is my current favorite, and has been for many years. One day I listened only to this song, like twenty or thirty times, and stopped only because I had to leave my home for some reason or other. It's an incredibly beautiful song, and I sometimes sing it to myself to cheer myself up. It's a song that lifts me up, like a reprieve from mundane cares. It works almost like a fairy tale. If you haven't heard it, I highly recommend you check it out.

Los Lobos did a show at the Santa Monica Pier a few years ago, this song was the highlight for me. The whole show was great, but this one tune made my night.

"Reva's House" is one of those great rock songs that sounds like summer. Its sound brings to mind everything that's positive about summer - the possibilities, the excitement, the youth. But Los Lobos can mess with your expectations. Though it has this great positive sound, there is the line, "There's something going wrong." And then this song suddenly changes with the lines, "Could only hear the sound/Of the breaking of her heart." I love them for that.

"When The Circus Comes"

"When The Circus Comes" is another that I sometimes find myself listening to over and over, usually when I'm feeling sad or frustrated or lost. It's an incredible song. Here is a taste of the lyrics: "You left your named carved on a tree/You scratched mine out right in front of me/Didn't mean that much/Didn't mean that much." I completely love this song. This album really has a lot of songs that played important parts in my life, songs I have a strong emotional attachment to. By the way, Phish has covered this one, and included it on a few of their live albums.

"Short Side Of Nothing"

"Short Side Of Nothing" is the one I remember hearing on the radio a lot at the time. It's another really strong track, and another with an honest emotional core. I think that might be part of the draw. Not only did the band experiment and try different things, but they did it while remaining true to the essence of the songs. It's like experimenting to get closer to the truth, rather than just messing around in the studio. Check out these lyrics: "Dreams wash down the gutter/All my hopes in vain/Crows up on the rooftop/Laughing out my name/Here I am on the short side of nothing."

"Two Janes" is another that played a significant role in my life. It's an excellent and beautiful and sad song. I like that you can read into it what you wish, to an extent. It's specific in the lyrics up to a point, but a lot is left open.  Those are the songs that so many folks can relate to. Songs like this one make the listener an active participant. Early in the song we learn, "Jane number one looked as happy as can be/Jane number two knew what could set them free/Too many nights hiding under beds/Too many fears to fill their pretty heads." And then near the end, "Jane number one is standing at the gate/Jane number two has the key that holds their fate/Too many angels with brand new silken wings/Too many cries for love but no one hears a thing."  It's an amazing song.

It still surprises me that on an album that is one of my all-time favorites, there is one track that I'm not all that fond of. "Whiskey Trail" is the only tune on this album that's just not that interesting or compelling. It's a country rock song, and it's never grown on me. It still might someday, I suppose.

Kiko ends with "Rio De Tenampa," a delicious tune sung in Spanish. It feels like a last song, but also has that element of a street party, conjuring the image of people following a band down narrow streets, that sort of thing.

This special 20th Anniversary Edition has five bonus tracks, nearly twenty-four minutes of music. The first is a studio demo version of "Whiskey Trail," and while it has more of a raw power and drive than the album version, this remains the one song that doesn't move me. Sorry.

The second is a studio demo version of "Rio De Tenampa," and it's actually quite different from the official version. First of all, it includes verses, which are sung in English. Also, it's more than twice as long as the album version. It's completely wonderful. I love this rendition, and it's quickly become one of my favorites. "I wondered how long these memories would last and dreamed of what tomorrow will bring."

The other three bonus tracks were recorded live in 1992, and were part of the "Holiday House Party With Los Lobos" special on NPR. The first is a seriously cool version of "Peace," which includes a short introduction at the beginning, and an interesting ending.  The second is "Arizona Skies," but with "Borinquen Patria Mia" with lyrics sung in Spanish.  The final bonus track is a groovy live version of "Kiko And The Lavender Moon."

CD Track List
Kiko 20th Anniversary Edition is scheduled to be released August 21, 2012 from Shout! Factory and Rhino. Also scheduled for release on that date is the new Kiko Live album, which will be available on CD and DVD. (I'll be reviewing those soon.)

Posted by Michael Doherty at 5:06 PM