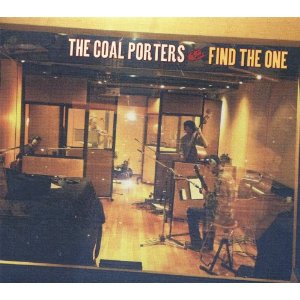 The first thing that hit me about this band was, of course, the name. The Coal Porters. It made me laugh, but then I thought, well, this band has to be damn good to pull off a name like that. And I was not at all disappointed. People are doing a lot of interesting things with bluegrass these days. It's a form of music I love, but I'm no purist. I actually really like when bluegrass is mixed with other genres, and also when bands do bluegrass covers of songs from other musical realms. The Coal Porters cover David Bowie and the Rolling Stones on this record, certainly not traditional bluegrass fare.

Most of the songs, however, are originals. This band features three songwriters who all contribute good material. And of course it's not a bluegrass album unless there is at least one instrumental, and this album has one titled "The Betsey Trotwood." It's fun tune written by John Breese and Carly Frey.

The only thing on this album that I could really do without is the introduction to "Ask Me Again" by DJ Brian Matthew. Yes, he's an important figure in the history of music. But it's jarring and it pulls me out of the moment every time I listen to this album.

Find The One was produced by John Wood, whom you probably know from his work with Fairport Convention.  By the way, this is an enhanced CD, and apparently there is a short documentary film of the band. I was unable to access it because my DVD player didn't recognize that this was anything but a CD, and my computer kept telling me that Flash Player wasn't installed even though I just installed it three times.

"Barefoot On The Courthouse Lawn"

The opening track, "Barefoot On The Courthouse Lawn," has a really pretty start. Then when the vocals kick in, it takes on one of those positive, can-do attitudes. This song really brings to mind in a vivid way the folk festivals I used to attend in Oregon, with lots of folks dancing on the grass. Dresses twirling in the air, toddlers trying to keep up with their parents, lots of great music, and a happy, relaxed vibe. This song takes me right back to those wonderful days, with its overall feel, and with lines like, "A crowd aged eight to eighty/All tapping feet in time/27 strings pick Glendale Train/In summer's bright sunshine."

"Barefoot On The Courthouse Lawn" was written by Sid Griffin.

"Never Right His Wrong" features female lead vocals. Carly Frey, the band's violinist, sings lead. She also wrote this track. This is one of my favorites. I dig the vocals, particularly in the chorus, which is, "His arms were open, his eyes like the dawn/But she ain't the same since he's been gone/His mind was made up, the past an older song/But she knew then that he'd never right his wrong." There is a really nice break where the fiddle takes over. I really liked this song before that section, but this is the part that made me love it.

Okay, I hate the use of the letter "U" in place of the world "you." But that aside, "Hush U Babe/Burnham Thorpe" is a seriously cool tune. And it doesn't hurt that it features Richard Thompson on guitar (he's fantastic, as always).  I love the vocal delivery on the lines, "sounds like someone's getting close/I pray it is not the Holy Ghost/A few more miles, then we're there/I love you all, I do I swear." It has this great energy. And then the fiddle takes the lead. I just can't get enough of this fiddle.

"Hush U Babe/Burnham Thorpe" was written by Sid Griffin and Carly Frey.

The album's first cover is "Heroes." I've long been a big David Bowie fan. And in 1990 or 1991 End Construction did a sort of bluegrass Bowie medley that was completely wonderful, and totally worked. Before that, I'd been wary of folks covering Bowie. That medley changed things for me, and prepared me for this beautiful rendition of Bowie's "Heroes," the title track from his 1977 record. There are male and female lead vocals on this one. It's interesting that they chose to have the female vocals come in on the line, "I, I will be king, and you, you will be queen."  This is one of my favorite tracks, and the more I listen to it, the more I like it.

"Red-Eyed & Blue" is another track that I love, mostly because the female vocals have an old-timey country feel, which I really enjoy. Plus, this song has a great vibe, like a slow summer breeze at dusk. And I really like the lyrics to this one. Here is a taste: "My rainbow's colours are down to just two/I'm red-eyed and blue over you/All her friends said he would ramble and roam/But her infidelity started at home/What could he do? Red-eyed and blue/Tried to get even but only got even more/Red-eyed and blue over you."

"Gospel Shore" is one of the most interesting tunes on this record. It has this cool bass line in its opening section, but this song has several different sections, all of which have engaging elements. This song has an intriguing structure. This track also features Jules Bushell on musical saw, and Charlie Thomas on percussion.

The album concludes with a cover of the Rolling Stones' "Paint It, Black." It's weird that they included a comma in the title. My copy of Aftermath has no comma. Word is that when Decca released the song as a single in 1966, they inserted the comma (but the original and true title of the song has no comma). Anyway, this rendition starts with a sort of bluesy vibe, then kicks in. It's a good, vibrant, lively rendition (particularly in the vocals). And it features Robert Elliott on sitar.

The Coal Porters are John Breese on banjo; Carly Frey on vocals and violin; Sid Griffin on vocals, mandolin, harmonica, and autoharp; Neil Robert Herd on vocals, guitar and Dobro; and Tali Trow on vocals and bass.

Joining them on this release are Andrew Stafford on bass, Jules Bushell on musical saw, Robert Elliott on sitar, Charlie Thomas on percussion, and Richard Thompson on guitar.

Find The One is scheduled to be released on September 18, 2012 on Prima Records.  This is the fifth release from The Coal Porters.

Posted by Michael Doherty at 6:31 PM