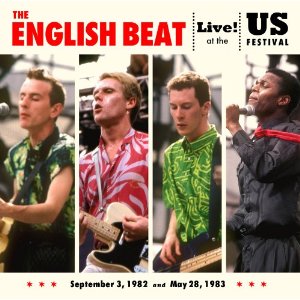 Shout! Factory re-issued The English Beat's entire catalogue in a box set earlier this year. That's pretty exciting, but what is even more exciting is the release of a new live album, Live At The US Festival, featuring performances from 1982 and 1983. This is a two-disc set, the second disc being a DVD.

The US Festival was held during two weekends in 1982 and 1983 in San Bernardino, California, and was funded by Steve Wozniak, co-founder of Apple Computes. The lineups were fairly astounding, and included bands like Grateful Dead, The Kinks, Fleetwood Mac, David Bowie, The Ramones, The Police, The Clash, Talking Heads and Oingo Boingo.  Some performances have already been released, including those by Willie Nelson, Waylon Jennings and Quiet Riot.

And now the performances by The English Beat are seeing a release. For those who are unfamiliar with their music, it's a delightful combination of ska, pop and punk. This band has the energy of The Mighty Mighty Bosstones, with some of the attitude of The Clash and some of the silly joy of Sha Na Na. They're a great band to dance to, with excellent grooves, but also with good lyrics. They're not just a seriously fun band; their lyrics are strong as well.

The CD contains selections from both shows, slightly favoring the 1982 show.  There were several songs that the band played at both shows, and the CD refrains from repeats. The CD presents tracks from the 1982 concert first, following it with songs from the 1983 performance. The album includes bits of stage banter with several tracks, which I appreciate. It opens with a shout to the audience, "Come on, everybody, let's twist and crawl." "Twist & Crawl" is such a cool tune, and a good one to dance to.

They played several songs from what at the time was a yet-to-be-released album, Special Beat Service, including "Sugar & Stress" (which they call "another new number"). This is one of the best tunes. If it doesn't get you dancing, you've probably died in the night and are still unaware of your new state. Plus, I dig the lyrics: "This world is upside down/The rights and wrongs don't get much wronger/Mistakes found in the past/Turn into rules protecting power." It's a fantastic song.

In their introduction to "Save It For Later" they say it is to be the new U.S. single. The single didn't do all that well, but this is a song that would later be covered by Pete Townshend and Pearl Jam, and included in the film Kingpin (1996).

The band introduces "Two Swords" by saying, "This next song is about violence, and how stupid violence really is." This is a good example of a tune that has a message but is still fun to dance to. The CD also includes good versions of two more of my favorites: "Mirror In The Bathroom" and "Jeanette."  It also features a fun version of "Tears Of A Clown."

In the introduction to "Ackee 1 2 3" they say, "This one's all about, quite by surprise, catching yourself smiling. Don't happen very often, so when it happens, enjoy it." I imagine the entire crowd was smiling throughout the band's set.

The CD contains just under an hour of music.

The DVD contains the band's performances from both concerts - September 3, 1982 and May 28, 1983. The first two songs are missing from the 1982 concert because, according to the liner notes, the master elements for those performances have been damaged (but interestingly, their introduction is included). Thus, the performance from 1982 is approximately 47 minutes, a bit shorter than the 53-minute set of 1983.

Both sets were performed during the daytime, and shot with multiple cameras. There are some shots of the audience, and they're definitely grooving and dancing (though the ones closest to the stage are packed in a bit too tightly to be able to dance - yikes, claustrophobia sets in just looking at those folks).  The band members are clearly enjoying themselves. You can see it on their faces in the first show especially during "I Confess," "Sugar & Stress," and also at the end of "Stand Down Margaret."  There is so much energy and joy and good vibes.

The 1982 performance of "Get A Job" has a false start, and there's some funny stage banter which is not on the CD, for the CD takes that song from the second show. "Two Swords" really gets the audience moving, with even those squashed up front somehow finding space to dance.  And the crowd starts jumping the moment they recognize "Mirror In The Bathroom."

"Jackpot" is their encore to the first show. Before the song, they mention how this is the biggest audience they've ever played to, and joke they feel they know everyone personally. By the way, they also make a joke reference to Woodstock after their encore

At their second performance at the US Festival, this one in 1983, they're introduced as The Beat rather than English Beat. The Beat is the band's real name, but in the United States they were called The English Beat because there was already a band called The Beat.

This was another daytime set, and apparently it was a very hot day. Singer/guitarist Dave Wakeling, in the introduction to "Two Swords," says that "dancing's a lot better than violence, especially on a hot day."

If anything, it seems that the 1983 audience is even more into the band's set. There is a nice seriously wide shot of the audience (with the stage in deep background). It is a large crowd, and the audience is clearly having a great time. Watch them clapping and dancing during "Too Nice To Talk To," "Ranking Full Stop"and "Save It For Later."  There are shots of some people really getting down and cutting loose.

The DVD has no special features.

CD Track List
Live At The US Festival '82 & '83 is scheduled to be released on September 18, 2012 through Shout! Factory. I hope they release more performances from these concerts on DVD.


Posted by Michael Doherty at 4:56 PM