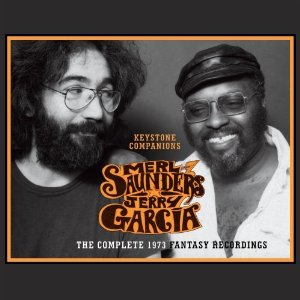 Back in Boston in the late 1980s there was a weekly radio program called "Dead Ahead," which played Grateful Dead concert tapes along with a few interesting album tracks. It was on that show that I first heard music from the Keystone recordings by Merl Saunders and Jerry Garcia. Specifically, what I first heard was "Mystery Train."  And I loved it. It was quite a bit different from what Jerry was doing with the Dead, but of course in a way just as good. And now, twenty-five years after I first heard that tune, Keystone Companions: The Complete 1973 Fantasy Recordings is being released.

This 4-disc box set includes the recordings from the two shows they performed on July 10 and 11, 1973, including seven previously unreleased tracks.  Yes, this music is from 1973, the year that is considered by many Grateful Dead fans (myself included) to be the best year of Dead concerts. And even though the Dead did seventy-two concerts that year, Jerry Garcia and Merl Saunders performed somewhat regularly at the Keystone, keeping the group low-key (and unnamed). And when Jerry wasn't playing in either of those bands, he played in a bluegrass band called Old & In The Way. Did he ever sleep?  Part of what made the Grateful Dead so great in 1973 was the jazz-like way the band approached the material that year, often stretching out in jams that were fairly open-ended. And that same spirit is heard throughout these Keystone recordings.  There is really only one somewhat short track here, that being "That's All Right, Mama."

There are a lot of extra goodies in this box set. Keystone concert calendars from 1973 are included on the back of each disc's sleeve - a nice touch. There is also a 28-page booklet, with photos and notes, a poster of the July 1973 concert calendar, a coaster, a button and a scratchbook disguised as a matchbook. But it's the music that is key here.

The first disc opens with "Hi-Heel Sneakers" and Jerry sweetly singing, "Put on your red dress, baby, because we're going out tonight." I've always thought this song was a bit silly, mainly because of the phrase, "your wig hat." Right off the bat, we get that first groovy jam. "Keepers" is a seriously funky instrumental, fantastic fun, and unlike most of what you've heard from Jerry Garcia. An awesome groove that you can dance to. It's one of the tracks that was previously unreleased.

"It Takes A Lot To Laugh, It Takes A Train To Cry" is one the Grateful Dead did a few times. Jerry gives a fairly soulful delivery in this rendition, which has a bit of a slower groove than Bob Dylan's original. And holy moly, listen to Jerry on "I could not get across" - he does something with his voice I don't think I've ever heard before. This track was previously unreleased.

Jerry Garcia covering Rodgers & Hart? Yup. Not only does this band do a cool version of "My Funny Valentine," but they really jam on it. At 18:14, it's the longest track in this set. They do a jazzy instrumental rendition, with some really nice work by Bill Vitt on drums. Jerry really gets into it, and there are some truly phenomenal moments.  The first disc ends with that great groovy version of "Mystery Train."

The second disc opens with "I Second That Emotion," and then goes into a really great slow, funky bluesy groove on "Someday Baby." Jerry really stretches on this, doing some interesting things vocally - and of course with his guitar. He was always about exploring new territory musically, and you can really sense a certain freedom here, and definitely a joy as well. There is a nice jam, with Merl doing some particularly wonderful things. This band is having a really good time, and that joy transfers to the listeners. I love this track.

"Merl's Tune" is an interesting instrumental track with lots of changes. As you might expect from the title, Merl Saunders does some great stuff. But Jerry offers some pretty impressive moments on guitar, and the track quickly becomes a free-form jam.

Jerry's voice sounds so sweet on "Positively 4th Street," which might be odd for this song. Dylan's somewhat angry delivery is more appropriate. But it's always a treat to hear Jerry sounding so good. And David Grisman sits in on mandolin for this one. This disc ends with "How Sweet It Is (To Be Loved By You)," a song I saw the Jerry Garcia Band do later.

The third disc has a few songs repeated from the first disc, and that's fine. It opens with a slow, thoughtful rendition of Dylan's "It Takes A Lot To Laugh, It Takes A Train To Cry."  Jerry sings, "Don't the sun look good shining through the trees" and "Don't the moon look fine setting down over the sea," a lyric flub that was in the version on the first disc too (switching "sun" and "moon").  We also get another cool version of that funky instrumental, "Keepers." This one comes on strong with keyboards, and has that same great groove - it's totally tight, yet simultaneously loose enough for interesting discoveries. It's a bit shorter than the first version.

Okay, do the first few notes of "One Kind Favor" sound just like the beginning of "Mississippi Half-Step Uptown Toodleoo"? Or is it just me?  This disc also features a high-energy, fast-paced light version of "That's All Right, Mama," a song I've always dug. Man, I love some of the stuff John Kahn does on bass. Fantastic. This is the shortest track in the set, at a mere four minutes.

There is a cool, long version of "The Harder They Come," a track that was previously unreleased. I think Merl Saunders' approach on this is really interesting and unusual. The third disc also has another long instrumental rendition of the standard "My Funny Valenine." Listening to this track, it's easy to believe Jerry Garcia could have been a great jazz guitarist if he'd decided to go that route. This track is truly wonderful, and includes a somewhat spacey jam.

The third disc ends with a pretty good version of "Money Honey." I love what Jerry does during the jam section toward the end.

The real treat on the fourth disc is "Like A Road," with a soulful delivery on vocals. This is one that Jerry played in later years with the Jerry Garcia Band. Those versions had those great backing vocalists. But in this version Jerry handles the vocals by himself, giving it a very different, more personal, feel.  The fourth disc ends with a second version of "How Sweet It Is," and it's a really good rendition with lots of energy.

The musicians on these discs are Merl Saunders on keyboards, Jerry Garcia on guitar and vocals, John Kahn on bass, and Bill Vitt on drums.  As mentioned, David Grisman plays mandolin on "Positively 4th Street."

Keystone Companions: The Complete 1973 Fantasy Recordings is scheduled to be released on September 25, 2012 through Concord Music Group.

Posted by Michael Doherty at 12:17 PM