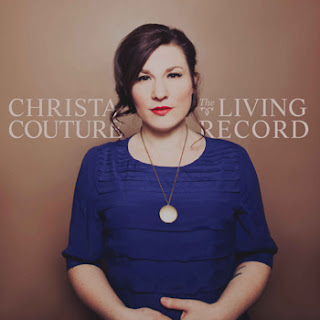 I fell for Canadian singer/songwriter Christa Couture a year ago when I first listened to Loved, a best-of EP. I was drawn to her voice, and intrigued by her lyrics and song structure.  There is something adventurous (and yet incredibly personal) in her songwriting. And besides being an incredible songwriter, Christa Couture is able to do so much with her voice, to convey so much with just a certain inflection on a word, or even a syllable.

She can create beauty when she wants to, and she often does, like in "Hopeless Situation" (I love the way she sings, "What are we? Are we artists here?" - those lines have already gotten stuck in my head).  But it's like the journey is the most important element in these songs. "I don't need a destination, I just need to walk/I need to gather my thoughts and take a stock of my words/Give me music," she sings in "Sing For Me."  And there are plenty of surprises on her new album, The Living Record. She can dip into indie pop, as well as folk. And then a song like "An Invitation In Three Parts" has more of a country feel at times, partly because Steve Dawson plays pedal steel.  "Paper Anniversary" is another surprise, in that it's a duet. It's an unabashed love song, sung with Jim Byrnes.

The Living Record features all original songs.  It's interesting - there are moments when she reminds me a bit of other artists, like The Nields, Tori Amos or Dar Williams, but those moments are fleeting. There is no one quite like Christa Couture.  The Living Record is a really strong album, and each time I listen to it, I am more enamored of it.  Different songs stick out as favorites on each listen.

"You Were Here In Michigan"

The Living Record opens with "You Were Here In Michigan," a pop-folk tune that has a bright feel, due in part to its drum beat.  I love Christa's delivery of "when I told her no" - just that quick quiet way she says "no," like an actor tossing away a great line to make it even funnier. The full line is "She said, 'well isn't Canada part of America now?' and was surprised when I told her no."  The refrain is, "I am lost in the city, but don't take pity on me," a line a lot of folks can relate to.

"Good Bayou" is more of a folk tune, and right away I really like the guitar work. The silly title actually made me laugh. Christa does some seriously adorable things vocally on this one, and I can't help but love this song about her "boy from down the bayou." She describes him as her "favorite phone call." This one too has a bright, positive feel. Then there is an interesting change for the line, "Anywhere in Canada is so far from Louisiana."

"Lucky Or Lost" is a slower, softer, sadder tune that opens with the line, "It's hard to say if I'll ever gain capacity for joy again because where I'm broken is so very broken." She is amazing with this kind of song, and is adept at breaking your heart if she wants to. But you get the sense that's not what she's trying to do, for her music has something of a healing about it.

This song is driven by piano and her voice. I love the way some of the lines are given as almost a whisper, like she almost doesn't want to admit them, like, "I'm a witness of catastrophe, a kind of nightmare." Then suddenly the song changes three and a half minutes in, taking on a strange vitality, almost a forced brightness as she sings about going through the motions and getting closer to the life she wants to live, before taking on a more naturally dark tone ("deep down in the soil/deep down in the hole") before turning more to its main feel.

"Pirate Jenny And The Storm"

"Pirate Jenny And The Storm" is a truly unusual song, and is one of my favorites from this album. Christa tries lots of different things with this one, and is successful at each turn (and this song takes several).  It begins almost like an explosion, and at times sounds like a demented sideshow. It then slips into a pretty realm, when she sings, "How your body is never touched/How your singing is never heard/I've never cried so much, little bird." And the piano part sounds almost like a lullaby toward the end, before the song builds with the repetition of "Sail, set sail." I love this song. She really takes us on an interesting journey with this one.

"Pussycat Pussycat" is maybe the most surprising tune on the album. This one has a funky edge. Seriously. And there is something flirtatious and sexy in her vocal delivery. This song has a catchy rhythm, even in her vocals, particularly on "What a year, what a year, what a year."  I completely dig this song. She gives an impressive vocal performance throughout, but especially in that section in the middle. (There are moments when she is up there with the great jazz singers.)

And check out these lyrics: "I went to take the tube and got stuck/I went to take the train and got mugged/I went from pub to pub to pub to pub/Oh yeah and then I fell in love."  I love that falling in love is presented almost as an afterthought, not nearly as memorable as trouble on the subway. But it's also included in a line that lists troubles.  And then listen to that organ (that's some wonderful stuff by Chris Gestrin).  This is one of the coolest songs I've heard this year.

"Wooden Shoes And Windmills" is another that I love, in no small part because of the presence of cello, an instrument that always does it for me. But the lyrics are also wonderful. Here is a taste: "I was gone before you were gone/I didn't know the best way to pack up our days/Recall that night on your lawn - a drunken display of my rot and decay/You were kind at the perfect time."  This is a gorgeous song.

"The Way Of The Dodo (The Living Record)"

The album concludes with its title track, a beautiful song on which Christa Couture plays piano. I'm continually struck by how well she crafts a song, and by her vocal delivery, how she's able to draw you in. In this song, a line that really hit me (partly because of the intimate, sad way she presents it) is "This is the closest we'll ever be again, and when you take your last breath, I'm going to take it in and never let it go."

The Living Record was released on September 4, 2012. It was produced by Steve Dawson.


Posted by Michael Doherty at 3:07 PM