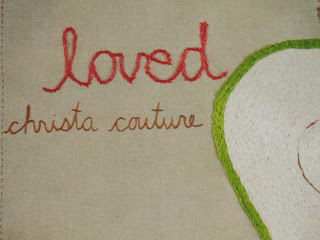 Halfway through the first song, I fell madly in love with Christa Couture. By the end of the second song I was making promises to the voice coming through my speakers. That song gave me a smile so big my face couldn't contain it, and it burst out on its own (the last I saw it, it was traveling north on Route 5).

Loved is a sort of "best of" EP, with five fan favorites recorded between 2002 and 2010 and previously released on her two full-length CDs. This music reminds me a bit of some early work by Ani Difranco, particularly the first track. There is something so honest and intimate about her delivery that all her lyrics feel true.

"I opened the floodgate on us/I opened my mind too far/The ocean came between us/And it made a star/We wish upon it/We wish for love/Because we like each other/But it's not enough." These lines open "I Will." Wonderful, right? And yes, her voice reminds me at times of Ani Difranco. And sometimes she sounds totally cute and sweet. It's a voice you'll want to take to bed. You'll want to take it everywhere. In addition to that, I love the work on guitar on this track, which was originally included on Fall Out Of Oz (2005). And the drums are fantastic.

"Sad Story Over" is my favorite track on this excellent EP. I absolutely love this song. It has a great build. The steady pounding of the drums is perfect, my heart wanting to keep time with it. And of course Christa's vocals are adorable and incredible. She can do a lot with a simple "ha ha" and then "ah-ah." Also, the music is so surprising throughout - glorious and wonderful. Every time I listen to this song, it excites and delights me. Like a symphony that fell in with a gypsy carnival and came to be conducted by angels with a sense of humor.

"Sad Story Over" was originally included on Christa's 2008 release, The Wedding Singer And The Undertaker.

The first words of "Jennifer Grey" are spoken quietly, almost whispered into your ear, "Today is the last day I'm 23/It's been a good year/Well, a good year for me." Assuming yours is a friendly ear. This is a beautiful and honest song. She sings, "I don't know which way is up/I don't know which way is down/But as I'm starting another year/I'm happy to say I'm happy here." And she ends with the line, "It's a very good day."

(Speaking of Jennifer Grey, did you guys ever catch the show It's Like, You Know...? She played herself on that totally underrated and overlooked television show.)

"Day 4" begins with Christa's voice right in your ear - you can almost feel her mouth on the microphone as she sings, "I cannot sit still/I will twitch/I will travel/I am leaving what remains of me as I unravel." There is a gorgeous and excited joy that sneaks into her voice at times. She has a wonderful way of speaking directly to you. It's so disarming. You can't help but be drawn in, drawn to her voice, drawn into her world, into her songs, her stories. She picks her moments - it's not like the whole song is done that way. Because once she has you, she can take you along wherever she likes, sometimes to great heights.

"I Don't Play Piano" starts with just piano - some simple playing. After about thirty seconds, Christa's voice comes in to tell us "Well you know I don't play piano/Oh no, but I wish that I could." And yes, this is a song about wishing she could play piano, with references to Gershwin and Cole Porter (as well as to her grandmother, Irene). I love the lines, "And I know if I played on those keys/My love would find me." I think we've all felt that at one time or another. This song has a strange short section in the middle.

"I Don't Play Piano" is from Christa Couture's The Wedding Singer And The Undertaker (2008).


Loved was released in June, 2011. Also released at the same time was another EP titled Lost, which features songs recorded between 2002 and 2010 that weren't released until now. (Get it - Loved and Lost? Of course you do.) By the way, on the back of the CD case it says, "Unauthorized duplication is totally awesome."

Posted by Michael Doherty at 10:25 PM