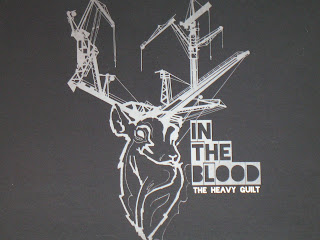 In The Blood is the second release by The Heavy Guilt, a San Diego-based band that mixes indie rock with some elements of garage, folk and even the jam-band universe. They formed after K23 Orchestra disbanded, K23 members Alfred Howard and Josh Rice having accumulated material that hadn't fit in with the previous band. They soon teamed up with singer Erik Canzona, and the other members were added quickly.

There is a definite power to this music, but it has heart as well. And intelligence, which comes through in the material. They do a good job of marrying the lyric to the music. For example, toward the end of "Fever" during the repeated "Open up your heart," it sounds like the music itself is opening, showing its own heart through the song's build.

The music of "It's Time," the opening track, is sparse and simple at the beginning. I love the way lead vocalist Erik Canzona's voice lifts, as if with hope, at moments in the opening lines - like on the word "before" in "I know you've been down before." It's such a well structured song. For example, the song kicks in immediately after the line, "It's time to put the past to rest," the music punctuating the thought, giving it a wonderful honesty.

I love the lines, "Time will take care of all wounds/I hope that time is coming soon." This is such an emotionally charged song, and a great way to open an album - get right in there under the listener's skin. A wonderful tune, and one of the album's best tracks.

"The Cost" starts with electric guitar. Then the vocals come in, and that combination has a great raw edge and power, which is not lost when the rest of the instruments come in. And later the guitar leads into a fantastic instrumental section, a jam that is my favorite part of the song. But there are also some good lyrics, like these: "Got some aspirin and decisions/Two to take and one to make/Been so biased by these visions/From a flood we wait to wake."

"Wyoming" is a prettier, mellower tune. Though this song is prettier, it is no less powerful than the previous track. At the beginning, this band gives you just enough of an instrumental introduction to completely change your mood before the vocals come in, immediately setting the tone, and setting you up. This song makes a home for itself in your head. Here is a taste of the lyrics: "Another slow wind speaks your name/Another candle burning bright/And as I sit and watch the flame/Growing dimmer over time." I really like this song.

These guys really know how to get the greatest effect from a repeated phrase or line. In "Wyoming" it was "All in all, it is all right" and "As long as day comes from your night" that were repeated, with wonderful results. In this song, it's "Don't ask me why." Erik gives a bit more and holds just a bit longer on the word "why."

This tune has a great, loud build, and then suddenly drops to let the vocals speak directly to the listener over a simple, good beat.

"Alibi" has a very different feel, a different mood. This song has a fun groove and a really cool, catchy guitar part that repeats at various points throughout the song. I would not be at all surprised if this one got some serious airplay on mainstream radio. And I dig these lines: "And I can't put it all together like I used to do/I trace your place in puzzle pieces cause I'm used to you."

"Blistered Hands" also has some wonderful work on guitar. I particularly like the instrumental section, the guitar at first tentatively finding its way through the song's environment over a good rhythm provided by Jason Littlefield on bass and Jenny Merullo on drums. And then it's as if the guitar is gaining confidence, strength, force and vigor. And they let it carry on as long as it needs to rather than keeping it short. So the song has a certain freedom. These guys must put on some good shows. Again, they choose a line to repeat; this time it's "Something comes next" after the jam. Perfect.

This CD concludes with "Fallen," a cool, more acoustic-type song. This is one of my favorite tracks from this album. The vocals are very different on this one - smoother, with hints of a late 1960s sound (think Velvet Underground). This song has some good lyrics too, like "I'll take the medicine of minutes/Swallow hollow pills of hours/Takes a little time to show." And I love the line, "I fell in love and I fell in war."

Joining them on this recording are Heather Marie Janiga on backing vocals, John Mailander on violin and viola, Chris Davies and acoustic guitar and electric guitar, and Timin Murray on sonic soundscaping.

In The Blood was released on July 5, 2011. The Heavy Guilt's first album, Lift Us Up From This, was released in September of 2009.

Posted by Michael Doherty at 4:06 PM