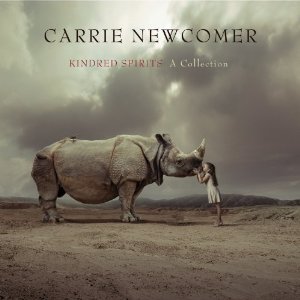 Carrie Newcomer is a singer and songwriter I was first turned onto back in the early 1990s when I was getting heavily into folk. Then in the mid-1990s, I co-hosted a folk radio show in Oregon, and we played Newcomer fairly regularly. Now her new CD, Kindred Spirits: A Collection, provides a good opportunity to revisit her music. And for those who haven't heard her, this is certainly a good place to start. This collection of her work features material from throughout her catalogue, and also includes two new songs and two live tracks.

There is something soothing in her music, something that speaks to us on a level I hesitate to call "spiritual" because of the negative connotations the word has for many of us. But what her music taps into, or creates, is a feeling of connection among people, and between us and the rest of the world.  The feeling that we're not isolated, wrapped in our own troubles, alone. Carrie's voice often seems to be saying, "It's okay, you're not alone." (She says it directly in "Angels Unaware": "No one's ever so alone/You can take the world down off your shoulders.")  Not just her voice, but the rhythms and all the instruments seem to be conveying that simple, but needed message.

"The Speed Of Soul"

Kindred Spirits opens with "The Speed Of Soul," one of the two new tracks featured in this collection. It's a gorgeous song about how the fast pace of our society is outside our natural rhythms, and how doing so much can separate us from what it is we've accomplished. There is always something soothing in a song that has lines like, "Come back, come home"

"Breathe In Breathe Out"

In "Breathe In Breathe Out," Carrie delivers a simple message that I often need to remind myself: "Breathe in, breathe out, let it go." But it is the music of this song that really moves me. This song features an incredible performance by Amjad Ali Khan on sarod. There is also some nice percussion by Jim Brock. Carrie sings, "What is done is done/Let it go/What is real is real/What we feel we feel/Then let it go."  It's certainly not always easy to do that. This is one of my favorite tracks; it originally appeared on her 2011 album, Everything Is Everywhere.

"The Gathering Of Spirits"

"The Gathering Of Spirits" has a happier feel, and features Alison Kraus on harmonies. Here is a taste of the lyrics "Let it go, my love my truest/Let it sail on silver wings/Life's a twinkling that's for certain/But it's such a fine thing/There's a gathering of spirits/There's a festival of friends/And we'll take up where we left off/When we all meet again."  Nice, eh? This song also boasts some good work on piano by Winton Reynolds. This song is the title track to her 2002 CD.

"Sparrow" is one of the live tracks, and is a nice rendition featuring just Carrie on vocals and guitar, and Dan Lodge-Rigal on piano. There is an intimate feel to this, with Carrie almost whispering at moments. "Lay your head on my heart/And we'll leave it that way." Though it's a live recording, the applause is cut from the end, which I appreciate, as loud applause is often jarring on an album that's not live throughout.

Mary Chapin Carpenter provides harmony vocals on "Before And After," and she and Carrie sound phenomenal together. They sing, "We live our lives from then until now/By the mercies received/And the marks upon our brow."  I also really dig the strings. This is a truly wonderful song, and is the title track to Carrie's 2010 release.

"If Not Now" (also originally from Before & After) is a really good folk song, one of my favorites from this collection. This is one of those songs that feels like a friend, there to lean on. "We may never see this moment/Or place in time again/If not now, if not now, tell me when." This track features good use of backing vocals, echoing Carrie on "I may never see the promised land," and then later on "If not now, tell me when." And of course I love the strings.

"A Whole Lot Of Hope"

"A Whole Lot Of Hope" is an early song from Visions And Dreams. This is a song I've always liked, a truly pretty and sweet song. Here is a taste of the lyrics: "Sometimes you just follow your heart/Don't analyze too long/Or maybe it might just be gone/And you've got a whole lot of hope/You've been keeping in your pocket safe from harm/A whole lot of dreams/You've keeping in your pocket safe from harm." I really like her vocals on this song. For this track she is joined by Michael Lewis on guitar and keyboard.

"A Long Christmas Dinner" is the second of the new songs. This one tells the story of a large family gathering yearly for the holidays, and the changes the family has gone through.  Despite the changes over the years, Carrie sings, "But it feels like it's been one long Christmas dinner/One unending prayer, one unbroken line." Krista Detor and David Weber provide backing vocals on this song. Plus, it has a Beatles reference.

"Bare To The Bone"

This collection concludes with "Bare To The Bone," which is the other live tune, and features Carrie accompanied only by Robert Meitus on guitar. (This track does have the audience applause at the end.)

CD Track List
Kindred Spirits: A Collection was released on November 13, 2012 on Rounder Records.
Posted by Michael Doherty at 7:24 PM