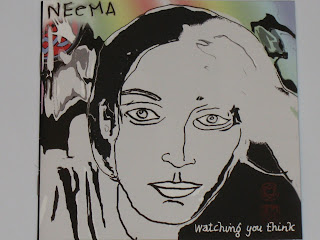 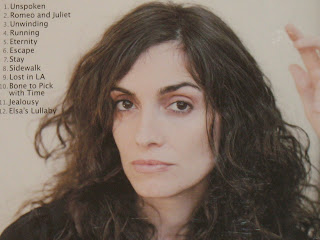 Leonard Cohen has impeccable taste. About NEeMA, he's been quoted as saying, "In the midst of all the static, a voice of true feeling arises - a rare event." Certainly this is what piqued my interest in this singer/songwriter. And for that (as for many things) I am thankful to Leonard Cohen. Watching You Think is a wonderful album, full of beauty and passion and excellent lyrics.

Leonard Cohen also helped produce this CD, and provided the marvelous artwork for the cover. Included in the lower right corner is the symbol of the order of the unified heart, also seen on the cover of his 2004 release, Dear Heather. His daughter Lorca provided the photographs of NEeMA for the album's liner notes.

Watching You Think opens with "Unspoken." The first thing that hits you is the bass - this is some wonderful work by Miles Perkin. And then almost immediately it's NEeMA's voice, equal parts ethereal and earthly. On top of that, there is this wonderful groove that seems to come from some eastern European land from some time past, which is fitting for the opening line, "a long time ago in a land far away."

"Unspoken" is a strange sort of love song. I love the odd detail, like "they shared a tangerine on their first date." And the song ends with the bass.

The only cover song on this album is "Romeo And Juliet," written by Mark Knopfler. This has always been one of my favorite Shakespearean-themed songs, and NEeMA does a great job with it. Her singing is fairly faithful to the original, even approaching a spoken word style at moments, like on the line, "we both come up on different streets." Interestingly, she sings, "Julie, Julie" instead of "Juliet."

"Romeo And Juliet" was originally included on the 1980 Dire Straits album Making Movies.

NEeMA's voice at moments throughout the CD reminds me of Melanie (think of Melanie's great cover of "Ruby Tuesday" rather than, say, "Look What They've Done To My Song, Ma"), but particularly on "Unwinding." "Unwinding" is a sweet and beautiful song. For a song about letting go, this song seems to cradle the listener in its arms. It makes a safe place in the universe for the listener to dwell.

"Escape" reminds me of Edie Brickell & The New Bohemians, but with a 1960s pop rhythm. This song features nice touches by Bob Stagg on trumpet. This song's lyrics mention Montreal in the lines, "It's a foggy night in the streets of Montreal/i'm walking beside me and watching myself fall/soon i'll be spiraling/i'm losing ground again."

"Stay" is another sweet and catchy folk song. Check out these lyrics: "i want to slide inside your home/like a caterpillar about to transform/and take up lots of room." This song also features wonderful backing vocals by Angela Desveaux. Their voices blend beautifully together.

"Sidewalk" is one of my favorite songs from this CD, mostly because of the lyrics. It begins, "the sidewalk's cracked/the streets are old/these structures cannot last/we're clinging on to a world/that's already of the past." And I love these lines: "i tried to walk away from you/the traffic lights were red/i couldn't get myself to go/so i made you leave instead." This song is sad and gorgeous.

"Lost In LA" is a song a lot of us can personally relate to, about trying to keep the dream of Los Angeles alive. Or pretending that it is still alive, as she sings, "we dig deeper we drill harder/we pretend it ain't getting darker/that the horizon isn't poisoned/and we're still living in the garden."

This is a wonderful song. There are many songs about Los Angeles, and many on this theme of losing our way once we get here. But this one seems more successful than most at hitting exactly the right emotional chords. And choosing perfect similies and metaphors - "you be the junkie/i'll be the hit."

"Bone To Pick With Time"

"Bone To Pick With Time" might be this album's best song. It got to me immediately. It's a wonderful and beautiful song about the transitory nature of existence. Here is a taste of the lyrics: "we've a very little window to do what we must do/write a song, bear a child, fall in love with you." Listening to this one alone late at night will likely bring tears to your eyes.

"Jealousy" is the most unusual-sounding song of the album. Odd tunings, some dark tones and a dog's howl all work to almost unnerve the listener.

This CD concludes with "Elsa's Lullabye," a sweet love song to her dog. (There is a photo of Elsa on the back of the liner notes.)